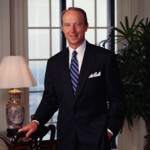 David J. Beck, along with Joe Redden and Ron Secrest, founded Beck, Redden & Secrest L.L.P. in January 1992.  He was formerly a senior partner of Fulbright & Jaworski L.L.P. in Houston, Texas.

Mr. Beck is a very active trial lawyer and has been throughout his professional career. He has been named by the National Law Journal as one of the top 10 trial lawyers in the United States, and one of the top trial lawyers in the Southwest. After a poll of Texas lawyers in 2002, he was listed by the Texas Lawyer as one of the “Go To Lawyers For Lawyers In Trouble.” In November of 2003 – 2012, a statewide survey by Texas Monthly Magazine named him as one of Texas’ “Top 10 Super Lawyers.” He has been named one of “The Best Lawyers in America” by Woodward & White since the inception of the publication in 1990, and is currently one of the few attorneys listed in four areas of practice. The “Best Lawyers” publication named him Houston “2009 Lawyer of the Year” in “Bet-the Company” litigation.

In the 25th Anniversary issue of Texas Lawyer magazine, he was named as one of the 25 Greatest Lawyers of the past quarter century.

In 2004, United States Supreme Court Chief Justice William Rehnquist appointed Mr. Beck to the prestigious Judicial Conference Standing Committee on Rules of Practice and Procedure. The Committee’s members include some of the leading judges, academicians, and practitioners in the United States. In 2007, Chief Justice John Roberts re-appointed him to a 3 year term on the Standing Committee.

He served as president of the American College of Trial Lawyers (2006-07), a professional association skilled and experienced in the trial of cases and dedicated to maintaining and improving the standards of trial practice, the administration of justice and the ethics of the profession, and whose membership is limited to the top 1 percent of the practicing Bar. He has been named a Fellow in the International Academy of Trial Lawyers, an Advocate in the American Board of Trial Advocates, and an “Honorary Overseas Member” of The Commercial Bar Association (“COMBAR”), a preeminent association of English barristers.

Mr. Beck served as president of the State Bar of Texas in 1995-96. In 2007, he received the Leon Green Award from the Texas Law Review Association “for outstanding contributions to the legal profession.” He is a past recipient of the prestigious University of Texas Law School Faculty Award and the State Bar of Texas Presidents’ Award.  He also received the distinguished “Honorary Barrister” Award from the University of Texas Law School Board of Advocates. In 2005, he was named as a member of the Board of Trustees of The Center for American and International Law, in 2007 he was appointed to the Center’s Executive Committee, and in 2010 was named CAIL’s Chair.

Mr. Beck is also a past president of the International Association of Defense Counsel (“IADC”). The IADC, which was founded in 1920, is a professional organization of attorneys in the private practice of law, who specialize in representing defendants in civil litigation.

Mr. Beck was honored with the Anti-Defamation League’s 2005 Jurisprudence Award. The Award is presented each year to legal professionals who demonstrate a devotion to the principles enshrined in the U.S. Constitution, commitment to the democratic values of the United States and dedication to fair and equal justice for all.

Mr. Beck has published numerous law journal articles and has appeared as a lecturer on many bar association and law school continuing legal education programs. He is the author of Legal Malpractice in Texas, a book which was originally published by the Baylor Law Review, 43 BAYLOR L. REV. 1 (1991), and whose second edition was published in 1998, 50 BAYLOR L. REV. 547 (1998). He also co-authored the 1999 through 2011 versions of O’Connor’s Annotated Civil Practice and Remedies Code, a treatise widely used by Texas lawyers. In 2003, he authored “The Legal Profession at the Crossroads: Who Will Write the Future Rules Governing the Conduct of Lawyers Representing Public Corporations?”, 34 ST. MARY’S L.J. 873 (2003).  In December 2004, he authored “Perspective: Separation of Powers – Is Our Judiciary Under Serious Attack?”, 67 TEX. B.J. 974 (2004). In April, 2006, he co-authored “The Vitality of Barcelo After Ten Years: When Can An Attorney Be Sued For Negligence By Someone Other Than His Client?”, 58 BAYLOR L. REV. 371 (2006), and in July 2008, he authored “Judicial Independence: Woe to the Generation that Judges the Judges”, 71 TEX. B.J. 572 (July 2008).  His latest writing is The Consequences of the Vanishing Jury Trial: Does Anyone Really Care?, 1 HOUSTON LAW REV. e 29 (2010). He has won various awards for his legal writing.