2021 Biennial Award Luncheon: Women at the Forefront of Change – A Virtual Event 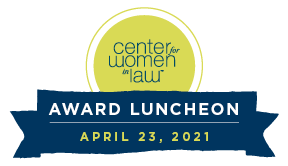 Through the power of storytelling, Soledad O’Brien brings a fresh perspective on diverse and contemporary issues to foster change in your own community or organization. Soledad has established herself as one of the most recognized names in broadcasting by telling the stories behind the most important issues, people and events of the day. A champion of diversity, she gives voice to the underserved and disenfranchised through her Emmy-winning reporting and acclaimed documentary series, “Black in America” and “Latino in America.” She also recently opened her show “Matter of Fact with Soledad O’Brien” from the steps of the National Archives in Washington, DC for the launching of “Rightfully Hers”- a new exhibit commemorating the 100th anniversary of the 19th amendment – prohibiting states from denying the vote on the basis of gender.

With eloquence and a measured ability to make often-divisive issues such as race relations, social inequality and mass incarceration accessible to all, she moves audiences to delve deeper into the headlines that shape our lives, outlooks and daily interactions. On stage, Soledad draws from her life and career to stimulate thoughtful conversation on the roles we each play within our communities and organizations, leaving audiences with memorable takeaways on the power of individuals and companies to make meaningful and lasting change.

PATRICIA DIAZ DENNIS is a longstanding leader and groundbreaking role model. For decades, she has forged paths and opened doors of opportunity for women, and remains committed to keeping them open.

Since her graduation from law school in 1973, Diaz Dennis achieved many firsts for women and Latinas in the legal profession, government, and the communications industry. She was the first female attorney at Paul Hastings, and eventually went on to receive three presidential appointments confirmed by the U.S. Senate. In 1983, President Reagan appointed her a member of the National Labor Relations board, and in 1986, he appointed her a commissioner of the Federal Communications Commission—both firsts for Latinas. In 1992, she became the first Latina Assistant Secretary of State for Human Rights and Humanitarian affairs, appointed by President George H.W. Bush. Read full bio here.

Thank you to our sponsors:

The Genecov and Atlas Families