Public awareness of recent incidents, including the killing of George Floyd and Breonna Taylor, has brought attention to the role of law enforcement and issues of racial profiling, brutality, over-policing, and the militarization of local police departments.  As society struggles to address these systemic challenges, we are faced with contrasting arguments – that historically not much has changed, and that law enforcement has made great strides over the last few decades.  Calls for reform have ranged from increasing diversity, enhancing training and outreach to defunding entire police departments.

The Center for Women in Law presented a panel to discuss the legal and practical implications of law enforcement reforms and the critical role that the legal community can play in helping to  achieve peace and justice for all.

Below is the link to the video of the September 16th webinar:
Finding Humanity and Peace in Justice: Perspectives on Law Enforcement Reform

This course can be claimed as 1.25 hour of self-study CLE credit with the State Bar of Texas. Self-study is optional and 3 of your total 15 hours can be completed in the form of self-study activities. Contact your State Bar with any questions.

The University of Texas School of Law 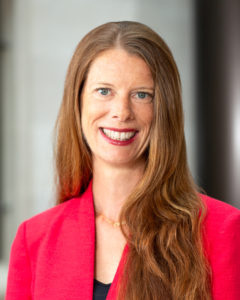 Jennifer Laurin joined the faculty of the University of Texas School of Law in 2009. Professor Laurin studies and writes about how law and institutional design shape the functioning of criminal justice institutions.  Her scholarship has considered the role of constitutional litigation in regulating police, the shared roles of courts, police, and lawyers in regulating forensic science, and oversight of indigent defense.  Professor Laurin is a co-author (with Michael Avery, David Rudovsky, and Karen Blum) of Police Misconduct: Law and Litigation, the leading treatise in that area of civil rights litigation.

Professor Laurin is active in criminal justice law reform efforts.  She currently serves as Reporter to the American Bar Association’s Criminal Justice Standards Task Force charged with updating the 1996 3rd Edition Discovery Standards, and she is the former Chair of the Texas Capital Punishment Assessment team, organized under the auspices of the American Bar Association.

Professor Laurin received her undergraduate degree in Politics from Earlham College. She earned her J.D. from Columbia Law School, where she was an Executive Articles Editor of the Columbia Law Review. She served as a law clerk to Judge Thomas Griesa of the Southern District of New York and Judge Guido Calabresi of the United States Court of Appeals for the Second Circuit, and spent several years as a litigation associate with the New York City civil rights firm of Neufeld Scheck & Brustin, LLP (formerly Cochran Neufeld & Scheck, LLP). 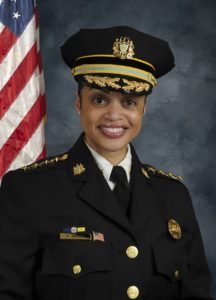 Philadelphia Police Commissioner, Danielle M. Outlaw, is an experienced and respected law enforcement leader. She stands at the helm of the nation’s 4th largest police department, which employs more than 6500 sworn officers and 800 civilians who work to help make Philadelphia a safer city. Commissioner Outlaw is the first African-American woman to lead the Philadelphia Police Department.

A believer in the power of connectivity and continued learning, she meets people where they are, engages critics and contributes nationally and internationally to ensure the Department’s narratives are accurately told, and to benchmark against other organizations to ensure best practices in contemporary policing here. Her overarching community safety goals are rooted in crime prevention and reduction, organizational excellence and community engagement and inclusion.

Commissioner Outlaw’s TEDx Talk – Humanity In Authority – dispels the belief that the two concepts are contrary in nature and explains how the two concepts can, and should, co-exist. She has also presented on various topics including Race and Policing, Women in Law Enforcement, De-escalation and Investigation of Use of Force, Building Community Relationships after Controversy, and Video Recording in Policing and Early Intervention Systems. She has been asked to provide technical assistance in areas of police accountability and risk management.

Prior to taking the helm as Philadelphia’s top law enforcement officer, Outlaw was the Chief of Portland, Oregon’s Bureau of Police. She was the first African American woman to hold that post. Commissioner Outlaw began her law enforcement career in Oakland, California where she spent 20 years in service with the Oakland Police Department.

The Oakland, CA native has received numerous awards, including the Police Executive Research Forum (PERF) Gary P. Hayes Award, the Cascadia Behavioral Healthcare Culture of Caring Award for Community Relations and Civic Engagement, and has been honored as a 2019 Marie Lamfrom Woman of Distinction by the Girl Scouts of Oregon and Southwest Washington. 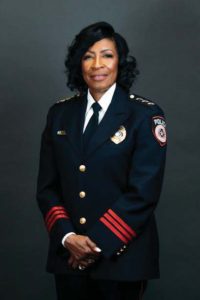 Chief Vera Bumpers has been with the Houston Metro Police Department for more than 30 years and currently leads a team of 194 sworn personnel and 93 non-sworn personnel. She was a pioneer from the beginning, becoming the first woman to be promoted in every rank within the Department. Chief Bumpers received a Bachelor of Science Degree from Texas State University and a Master’s Degree from Prairie View A&M University. She is a graduate of the 230th Session of the FBI National Academy in Quantico, Virginia. Chief Bumpers has been recognized as a 2016 Top 50 Black Professional and Entrepreneur 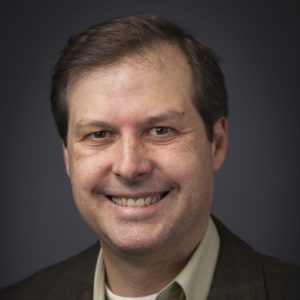 Alex S. Vitale is Professor of Sociology and Coordinator of the Policing and Social Justice Project at Brooklyn College and a Visiting Professor at London Southbank University. He has spent the last 30 years writing about policing and consults both police departments and human rights organizations internationally. Prof. Vitale is the author of City of Disorder: How the Quality of Life Campaign Transformed New York Politics and The End of Policing. His academic writings on policing have appeared in Policing and Society, Police Practice and Research, Mobilization, and Contemporary Sociology. He is also a frequent essayist, whose writings have appeared in The NY Times, Washington Post, The Guardian, The Nation, Vice News, Fortune, and USA Today.