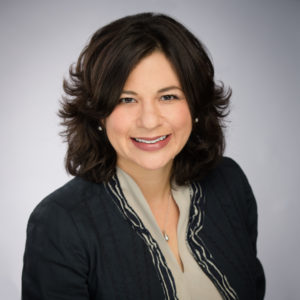 Veronica (“Ronnye”) Vargas Stidvent has been named as the new Executive Director of The Center for Women in Law. Her appointment, which begins immediately, was announced in a joint statement by the President of the Center’s Executive Committee, Lisa Genecov, and Dean Ward Farnsworth of The University of Texas School of Law.

“We couldn’t be more pleased to welcome Ronnye to our team,” said Genecov. “She has a passion for expanding opportunity that resonates with our mission to enhance professional success for women in the law, and she brings a tremendous capacity to build alliances and execute complex initiatives.”

“This is a great day for the School of Law,” noted Dean Farnsworth. “Ronnye has a proven track record in government, the private sector and higher education. She will be a remarkable leader for the Center as it moves into its second decade.”

Ms. Stidvent has held roles in both federal government and higher education in Texas. She served in Washington from 2001-2006 as Special Assistant to the President for Policy and Assistant Secretary for Policy in the U.S. Department of Labor. In Texas, she was the inaugural Director of the Center for Politics and Governance at the LBJ School of Public Affairs and was Chancellor for Western Governors University.  Ms. Stidvent most recently served as President of Stidvent Partners.

The Center for Women in Law, which is housed at The University of Texas School of Law, is the premier educational institution devoted to the success of the entire spectrum of women in law, from first-year law students to the most experienced and accomplished attorneys. It combines theory with practice, identifying and addressing the persistent issues facing individual women and the profession as a whole.

It’s the ambition of that vision that Stidvent cites as a key motivation for taking on the challenges of the Executive Director role. “I am proud to join an organization that is passionately devoted to enabling the success of all women in the legal profession and to have the opportunity to build on CWIL’s track record of success.”  Stidvent follows Linda Chanow, who led CWIL during its first ten years.

Stidvent holds her J.D. from Yale Law School but hails from Texas. The El Paso native got her B.A. at U.T. Austin and has been honored with the Outstanding Young Texas Exes Award.

“It’s a great bonus when we can lure a Texan back to campus,” said Farnsworth.

Stidvent hits the ground running as the Center’s major event for 2020—the Award Luncheon honoring the Hortense Ward Courageous Leader Award recipient, celebrating 100 years of women’s suffrage and featuring Soledad O’Brien as the keynote speaker—will be on April 17, in Austin.