Center for Women in Law 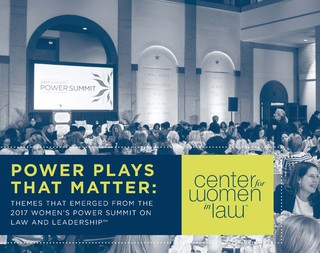 In April 2017, more than 340 leaders from both the public and private sectors came together with the goal of leveraging their power to advance their careers and the careers of other women. The platform was the Center for Women in Law’s fifth biennial Women’s Power Summit on Law and Leadership™.

This white paper details the themes and takeaways on making power plays that emerged from the provocative and dynamic interactions that took place between our speakers and attendees.

Linda Chanow is a lawyer, non-profit executive, professor, and nationally-recognized authority on women lawyers with more than 20 years of experience researching and writing on women’s leadership, diversity, and flexibility programs.  Linda is well-known for uniting stakeholders and inspiring action.  Her renowned educational programs have empowered hundreds of women nationally to achieve fulfilling careers and significant leadership posts in their respective firms, corporations, and associations. For nearly a decade, Linda led the Center for Women in Law at Texas Law, where she grew its influence nationally and increased revenues by more than 300%.

Linda has substantial experience working with a wide array of stakeholders, including CEOs, general counsel, chairs of global law firms, judges, deans and government officials.  Linda led all aspects of the Women’s Power Summit on Law and LeadershipTM, a national conference that convenes chairs of global law firms, CEOs, general counsel, judges, law school deans, and government officials with the goal of moving women into positions of power and influence. Under her leadership, the Women’s Power Summit™ grew to be one of the most sought-after invitations in the national legal community. Linda also built and directed the Consortium for Advancing Women Lawyers, the leading convocation of advocates of women lawyers in the profession that gathers every year in New York City to exchange ideas and share resources.

Linda is a sought-after speaker who has presented to hundreds of audiences on a variety of topics, including leadership, grit and growth mindset, unconscious bias, pay equity, and workplace flexibility. Since 2014, Linda has taught a leadership theory course at Texas Law that explored the gap between the number of women law school graduates and the number of women who occupy leadership positions in the legal profession. The class has been oversubscribed each year.

Linda was selected to serve on two Presidential Initiatives for the American Bar Association (Achieving Long-Term Careers for Women in Law and ABA Toolkit for Gender Equity in Partner Compensation) and as a liaison to the ABA Commission on Women in the Profession for the past nine years.  She served as a Team Advisor for the first Women in Law Hackathon and is a member of the advisory board for the Bexar County Women’s Bar Foundation LEAD Academy.

The Texas Minority Counsel Program recently honored Linda with the 2016 Lifetime Achievement Award and Lawdragon named her one of the 100 Leading Legal Consultants and Strategists for 2018, 2017, and 2016. In 2013, the Travis County Women Lawyers’ Association presented her with the 2013 Advancement of Women Award and she was selected to be one of two University of Texas professors to participate in Leadership Women that year. Linda is a Fellow of the American Bar Foundation and a member of the Dell Medical School Society for Health & Women. She served on the Board of Directors of the Women’s Bar Association of the District of Columbia (Term 2007-10) and co-chaired its Initiative on Advancement and Retention of Women.  Linda began her legal career as a commercial litigator at WilmerHale in Washington, D.C. after graduating magna cum laude from American University’s Washington College of Law in 1999.  While in law school, Linda focused on employment law and worked with Distinguished Professor of Law Joan C. Williams on the development of her book, UnBending Gender: Why Family and Work Conflict and What to Do About It.

The Conference Board: Leadership Council on Advancing Women, New York

Featured Speaker - Gender Diversity for a New Generation in a Global Legal Profession:  US and UK Perspectives

Institute for Inclusion in the Legal Profession, London

Invited Speaker - Grit and Growth Mindset: Why You Need Them on Your Teams

Invited Speaker - Getting Results for Women of Color

Invited Panelist - Moving Women into Positions of Power: Men as Allies and Champions

Invited Moderator - Diversity and Inclusiveness in a Global Context