More than 93 percent of the entering 1L class signed the Pro Bono Pledge, a record level of participation for The University of Texas School of Law’s Pro Bono Program. Students who sign the pledge commit to perform at least 50 hours of pro bono service before graduation. “The class of 2013 – the first […]

The Texas Capital Punishment Assessment Team, organized by the American Bar Association (ABA), today issued a comprehensive report with recommendations to help ensure fairness and accuracy in the state’s death penalty system. “Evaluating Fairness and Accuracy in State Death Penalty Systems: The Texas Capital Punishment Assessment Report” is the culmination of a two-year review of […]

The Center for Global Energy, International Arbitration and Environmental Law at The University of Texas School of Law has created a new fellowship program that recognizes students interested in pursuing careers in one of its three core subject areas. For its inaugural fellow, the center selected David Fisher, a Victoria, Texas, native who intends to […]

Students Invited to Attend “Change it Up! Lawyering for Social Change” Sept. 7

A recent report has found major flaws with the City of Austin’s policies for addressing dangerous apartment conditions to protect the health and safety of tenants. The report, “Addressing Problem Properties: Legal and Policy Tools for a Safer Rundberg and Safer Austin,” was released by The University of Texas School of Law’s Entrepreneurship and Community […] 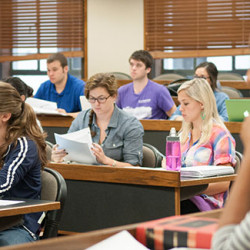 U.S. News and World Report announced its short list of 10 law degrees with the biggest return on investment, naming The University of Texas School of Law No. 1. According to its report, UT Law reported the highest salary-to-debt ratio – a calculation based on how many times a student’s reported starting salary covers his […]

The University of Texas School of Law has awarded the ninth Equal Justice Scholarship to Kelsey Chapple, an incoming first-year law student. The scholarship covers tuition and fees for three years of legal study. Chapple has committed to work for three years on a full-time basis after law school to provide direct legal services to low-income individuals or groups at a nonprofit organization in the U.S.