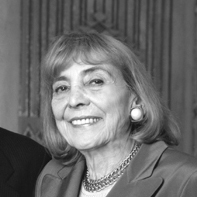 “A woman is more than a female who exists to reproduce. A woman is a person first, and she needs somewhere to go to help her be that person.”
– Audre Rapoport

Audre Newman was born on July 8, 1923 in Chicago, Illinois, and moved to Waco, Texas, when she was three years old. She met Bernard Rapoport on a blind date in 1941, and they were engaged the next day.

Since the beginning of their relationship, Audre worked with B to fundraise and campaign for progressive democrats. As she says of her work on populist Homer Rainey’s (ultimately unsuccessful) campaign for governor in 1945, “I ran the Rainey campaign office, but I also walked door to door in the terrible heat of summer and handed out literature. I had a full-time job during that campaign. I loved it.”

Audre long expressed her belief “that a woman has the right to plan childbearing.” That view manifested itself in the Rapoport Foundation’s support for a number of programs that pursue social justice for women.

Audre helped establish the Planned Parenthood Audre Rapoport Library, which provides educational materials to the Waco community and patients of Planned Parenthood of Central Texas. The organization attributes the library’s expansive materials on reproductive health and sexuality to Audre. The library also includes a large Spanish-language collection of resources on sexuality and reproductive health.

In addition to her support for Planned Parenthood, Audre, through the Rapoport Foundation, funded various youth educational projects, including the Audre Rapoport “Givat Gonen” High School in Jerusalem. According to the school’s 2005 Annual Report, Audre’s namesake high school is a comprehensive school with students in grades 7-12. It attempts to break the cycle of poverty in the area, where many families receive welfare and are unemployed or underemployed. The school offers a number of community-oriented programs that promote human rights and justice generally. For example, the school includes a unique community service program that pairs 7th and 8th graders with elementary students, senior citizens, and students in special education to teach various skills or tutor in classes. The Audre Rapoport High School fosters principles of the equality of human value, pluralism, and social justice in its students.

Together, Audre and B created an impressive network supporting democratic values, human rights, and justice. Many connect B’s success to Audre’s support. In fact the Foundation’s own website says, “Perhap’s [b_rapoport’s] greatest accomplishment was marrying Audre.”

In honor of Audre Rapoport’s dedication to women’s advancement and reproductive rights, the Rapoport Center for Human Rights and Justice annually awards a writing prize in her name. The Audre Rapoport Prize for Scholarship on Gender and Human Rights recognizes scholarship that addresses gender and human rights through an international, transnational, or comparative lens. The content of the papers and the selection committee’s interdisciplinary and international composition further the Rapoport Center’s mission by enhancing public dialogue about marginalized groups and the promotion of their enfranchisement.

Rapoport, Bernard, as told to Don Carleton. Being Rapoport: Capitalist with a Conscience, 1st ed. Austin: The University of Texas Press, 2002. Print.

“Who We Are,” The Bernard and Audre Rapoport Foundation, http://rapoportfdn.org/who-we-are/ (last accessed January 25, 2016)

Except where noted otherwise, all information is credited to Being Rapoport: Capitalist with a Conscience.