Beyond the Future of Work

The Beyond the Future of Work initiative seeks to shift future of work discourses and imaginaries. We aim to move away from the central preoccupation with the threat or promise of automation to a focus on the gendered and racialized economic, political, and legal structures that produce and sustain inequality and worker precarity. Intervening in this urgent scholarly and public conversation, we believe that imagining a more just and equitable future for workers requires acknowledging that informal work is the global norm rather than the exception, and rethinking the distinctions often drawn among productive, reproductive, and nonproductive labor. We need new research questions and collaborations, attentive to economically disenfranchised communities and their livelihood strategies that often remain invisible in the scholarship and advocacy on the future of work. 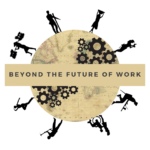 The website for the initiative serves as its central hub. Much of the content centers on our Summer 2021 Pop-Up Institute, including an extensive library of interactive videos. The site also features a number of events (past, present and future) and an array of resources (including scholarly publications, reports, and bibliographies). Among the resources is a series of policy-relevant reports on a diverse set of COVID-19 “hot spots,” drawing on empirical research highlighting the experiences of low-wage workers adversely impacted by the pandemic.