This post is a follow-up to Helgudóttir Ingulfsen’s paper “#RefugeesNotWelcome: Making Gendered Sense of Transnational Asylum Politics on Twitter”, which was published in the Rapoport Center’s Working Paper Series in 2016 (available here). That paper was also the winner of the Audre Rapoport Prize for Scholarship on Gender and Human Rights (2016), and was responded to by Courtney McGinn and Reina Wehbi in the piece “Are Refugees Really Not Welcome?“

In the age of Big Data­­—when Silicon Valley “tech bros” are busy convincing us of the merits of machine learning, and the US president pretends to govern while flirting with his white supremacists followers on Twitter—I make the case for why we need critical feminist scholarship now more than ever.

In December 2015, I was in my third semester of graduate school at New York University. Concerned about the rising tide of xenophobia (little did I know how much worse it would get), I wanted to look at online discourses about immigration and was interested in applying a feminist lens to the research. I typed #Refugees and #RefugeesNotWelcome in the search bar on Twitter and what I discovered was so dense with explicit sexist and misogynistic imagery and language that a few months later it amounted to a 120 page thesis. (You can read a condensed white paper based on my thesis here).

My dataset revealed conversations littered with images of young white women covered in blood – supposed European victims of rape perpetrated by male immigrants from Muslim-majority countries. Twitter users from the US, Europe, and Japan alike portrayed the flow of refugees crossing the Mediterranean to Europe as a carefully calculated Muslim invasion of Europe, threatening to destroy Western civilization. The Twitter users employed powerful gendered language and imagery to construct a binary opposition between ‘Us’ – the White, Western, Enlightened community – and ‘Them’ – refugees, particularly Muslim refugees, construed as threats to the racial and cultural preservation and physical safety of the Western community.

Ironically, Enlightenment ideas – civil and political rights, feminism, freedom of speech – were used to justify fundamentally illiberal immigration and integration policies. The appropriation of feminist ideas was a prevalent strategy among the Twitter users I studied. These strategies are fraught with contradictions. The Twitter users call for the protection of both Western and Muslim women against the supposed violent nature of Muslim men, while consistently attacking what they see as hypocritical liberal and multicultural feminists, framed as naïve traitors of the Enlightened White community. The below meme from my dataset is one example of this strategy, accompanied by the following tweet: “RT@……….: The perks of multiculturalism #refugeesnotwelcome”. 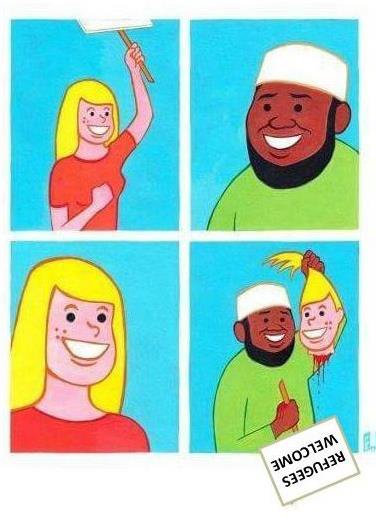 The realization that gender is instrumentalized in nationalistic and xenophpobic narratives is not new. Feminist scholars like Cynthia Enloe and Nira Yuval-Davis have been arguing as much since the 1980s. However, feminist studies of gender and nationalism have tended to be primarily based on interpretation of elite discourses or political statements. The vast amount of data produced by the billions of social media users around the world represents a new opportunity to develop more rigorous and empirically driven feminist studies of xenophobia. Social media are not just accessible pools of data that can be sampled for quantitative studies of social interactions; they are just as interesting for the richness and detail of the data produced by their users. Images, memes, and videos are combined with text commentary, providing detailed insight into how an individual user constructs a narrative and the types of visual and rhetorical tools employed to support that narrative. Knowing whether hashtags like #RefugeesNotWelomce, #Rapefugees or #WhiteGenocide are trending is not as valuable as understanding how each user justifies a narrative that frames male Muslim refugees as violent or racially inferior. If we want to combat xenophobia we have to understand what makes xenophobic narratives powerful and why they resonate with particular groups of people. Rather than counting hashtag use and “likes,” we need to delve into the stories behind the hashtags. Feminist discourse analysis is a powerful tool to do just that because gender binaries are key organizing principles behind these stories.

My study, published in 2016, highlights why we should be careful to mine Facebook and Twitter to study public sentiment: social media users differ from the general population in multiple ways, and the algorithms that structure information on social media are built to generate profit rather than organic conversations and interactions. Returning to the topic now, I see that my study failed to explore in detail a critical component of algorithmic bias – the ways in which gender and race biases are themselves integral to the structure of online information and interactions. Scientists have revealed how “machine learning algorithms are picking up deeply ingrained race and gender prejudices concealed within the patterns of language use.” The data that is used to train algorithms is after all generated by humans. One study found algorithms have adopted implicit biases commonly detected in psychology experiments: “[t]he words “female” and “woman” were more closely associated with arts and humanities occupations and with the home, while “male” and “man” were closer to math and engineering professions.” How might for example, Twitter’s algorithms have learned these types of implicit gender biases and how could those in turn be helping to make certain (gendered and racialized) content more prominent?

Phrases like artificial intelligence, Big Data, and machine learning give off a false aura of objectivity that can lead to fatal misrepresentations and uses of the data generated by social media users. I have witnessed first-hand how policy-makers can be seduced by Big Data’s false promise of objectivity. Participating in a meeting on Big Data and evaluation hosted by the Rockefeller Foundation and attended by UN evaluation officers and data scientists, algorithmic bias was not adequately addressed and Twitter was presented as a promising source of information on public sentiment. UN Global Pulse – the UN’s Big Data Initiative – was the main proponent, and several of their projects make use of social media data for perception studies. Presenting my findings to the data and research team at UN Women, I warned of the algorithmic biases in social media data and argued for extreme caution in using Twitter data to track public sentiment or perceptions on gender.

Feminist scholars would make ideal methodological foot soldiers in the battle to discount false narratives of Big Data objectivity, as feminist epistemology is inherently critical and skeptical of any tradition that lays claim to objective truth. We need more strong feminist voices like Soraya Chemaly to counter the corporate spin of Silicon Valley “tech bros.” We should ramp up investments in initiatives like the Women’s Media Center’s Speech project and the Algorithmic Justice League to begin to construct a more just and inclusive internet.

Inga H. Ingulfsen is a Research Analyst in Global Partnerships, at Foundation Center and graduated from NYU’s Center for Global Affairs in May 2016 with an MS in Global Affairs, specializing in gender, immigration and peacebuilding.