The Demystification of Contracts in Bankruptcy 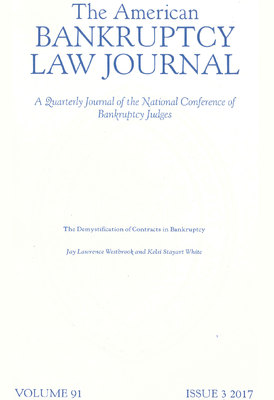 One of the nation's most distinguished scholars in the field of bankruptcy, he has been a pioneer in this area in two respects: empirical research and international/comparative studies. Professor Westbrook also teaches and writes in commercial law and international business litigation. He practiced in all these areas for more than a decade with Surrey & Morse (now part of Jones, Day) in Washington, D.C., where he was a partner, before joining the faculty in 1980. He is co-author of The Law of Debtors and Creditors (Aspen, 7th ed., 2014); As We Forgive Our Debtors: Bankruptcy and Consumer Credit in America (Oxford, 1989); The Fragile Middle Class (Yale, 2000); and A Global View of Business Insolvency Systems (Martinus Nijhoff 2010). He has been Visiting Professor at Harvard Law School and the University of London, and is a member of the American Law Institute, the National Bankruptcy Conference, and the American College of Bankruptcy. He serves as a consultant to the International Monetary Fund and the World Bank. He was the United States Reporter for the ALI's Transnational Insolvency Project and co-head of the United States delegation to the UN (UNCITRAL) conference that created the Model Law on Cross-Border Insolvency. He is an emeritus director of the International Insolvency Institute and a director and former President of the International Academy of Commercial and Consumer Law. He has been the recipient of outstanding contribution awards from the National Conference of Bankruptcy Judges, the International Insolvency Institute, and the American College of Bankruptcy. He has twice been named the Outstanding Teacher at the University of Texas School of Law. Recipient of "Larry King Award" from the Commercial Law League.

"Exemption of Derivatives from Bankruptcy"

“The Model Law in the United States: COMI and Groups”

Conference on Business Restructuring and Turnaround

Congressional Committee on the Judiciary, Commercial subcommittee -- Exemption of Financial Assets from Bankruptcy

Priority Conflicts as a Barrier to Cooperation in Multinational Insolvencies

Commercial Law Conference -- Presented his paper "Has the Stigma of Bankruptcy Declined among United States Consumers?" to a commercial law conference in Lanciano, Italy.