INCOMPREHENSIBLE!: A STUDY OF HOW OUR LEGAL SYSTEM ENCOURAGES INCOMPREHENSIBILITY, WHY IT MATTERS, AND WHAT WE CAN DO ABOUT IT 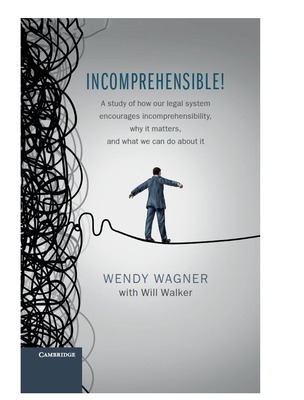 INCOMPREHENSIBLE!: A study of how our legal system encourages incomprehensibility, why it matters, and what we can do about it

Professor Wagner is a leading authority on the use of science by environmental policy-makers. She received a Masters of Environmental Studies in 1984 and her law degree in 1987, both from Yale, where she was Senior Editor of the Yale Law Journal and Managing Editor of the Yale Journal of Regulation. Before entering teaching, she practiced for four years, first as an Honors Attorney in the Enforcement Division of the Department of Justice's Environment and Natural Resources Division, and then as Pollution Control Coordinator with the Department of Agriculture's Office of the General Counsel. Prior to joining the faculty at the University of Texas, Professor Wagner taught at Case Western Law School and was a visiting professor at Columbia and Vanderbilt Law Schools.

Prof. Wagner’s research focuses on the intersection of law and science, with particular attention to environmental policy. Among her publications, “Bending Science: How Special Interests Corrupt Public Health Research,” a 2009 book Wagner co-authored with UT colleague, Tom McGarity, received the Hamilton Grand Prize for the best book published at UT in 2009. "Dynamic Rulemaking" (with Bill West, Tom McGarity, and Lisa Peters) was awarded the 2018 American Bar Association Award for Scholarship in Administrative Law. Several other articles ("The Science Charade in Toxic Risk Regulation”, "Equal Treatment for Regulatory Science" (co-authored with David Michaels), and “Misunderstanding Models” (co-authored with Pasky Pascual and Liz Fisher)) were chosen as one of the best environmental law articles of the year and reprinted in the Land Use and Environmental Law Review. Two other articles (“Information Capture and Filter Failure” and “Competition-based Regulation”) were selected for publication in the ELI-Vanderbilt Environmental Law and Policy Annual Review as among the top articles of the year.

Prof. Wagner has served on several National Academies of Science Committees, the Bipartisan Policy Center Committee on Regulatory Science, and served as a consultant to the Administrative Conference of the U.S. (ACUS) on a project on the agencies’ use of science. Wagner has also served on the governing councils of the ABA Administrative Law Section, the National Conference of Scientists and Lawyers (AAAS-ABA Committee), and the Society for Risk Analysis. Wagner is a Member Scholar of the Center for Progressive Reform.

University of Wisconsin School of Law

University of Virginia School of Law

Conference on Science and Evidence

Panel on Science and Environmental Law

Conference on Tort Law and Innovation

University of Minnesota School of Law