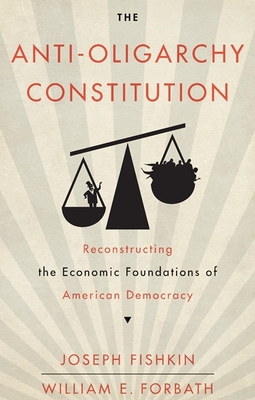 The Anti-Oligarchy Constitution: Reconstructing the Economic Foundations of American Democracy

“An important and stirring achievement. In this gold mine of historical discovery and legal insight, Fishkin and Forbath recover and renew the lost Constitution of strong democratic opportunity for all.”

Oligarchy is a threat to the American republic. When too much economic and political power is concentrated in too few hands, we risk losing the “republican form of government” the Constitution requires. Today, courts enforce the Constitution as if it has almost nothing to say about this threat. But as Joseph Fishkin and William Forbath show in this revolutionary retelling of constitutional history, a commitment to prevent oligarchy once stood at the center of a robust tradition in American political and constitutional thought.

Fishkin and Forbath demonstrate that reformers, legislators, and even judges working in this “democracy of opportunity” tradition understood that the Constitution imposes a duty on legislatures to thwart oligarchy and promote a broad distribution of wealth and political power. These ideas led Jacksonians to fight special economic privileges for the few, Populists to try to break up monopoly power, and Progressives to fight for the constitutional right to form a union. During Reconstruction Radical Republicans argued in this tradition that racial equality required breaking up the oligarchy of the slave power and distributing wealth and opportunity to former slaves and their descendants. President Franklin Roosevelt and the New Dealers built their politics around this tradition, winning the fight against the “economic royalists” and “industrial despots.”

But today, as we enter a new Gilded Age, this tradition in progressive American economic and political thought lies dormant. The Anti-Oligarchy Constitution begins the work of recovering it and exploring its profound implications for our deeply unequal society and badly damaged democracy.

Willy Forbath holds the Lloyd M. Bentsen Chair and is Associate Dean of Research at UT Austin School of Law; he is also a Professor of History at UT. He is the author of Law and the Shaping of the American Labor Movement, the forthcoming The Anti-Oligarchy Constitution: Reconstructing the Economic Foundations of American Democracy (February, 2022)(with Joseph Fishkin), and dozens of articles, book chapters, and essays on legal and constitutional history and theory and comparative constitutional law. He is completing a history of Jews, law and identity politics in the twentieth century and starting a history of socialist lawyering and legal imagination.  He occasionally writes on legal and constitutional issues for the New York Times, the Nation and other outlets, and is on the boards of several Texas organizations devoted to social movements and advocacy for affordable housing and workers’ rights. In addition to UT Austin, he has taught at UCLA, Sciences Po, Tel Aviv, Columbia, and Harvard.

“Wealth, Commonwealth and the Constitution of Opportunity: A Story of Two Traditions,” Harvard University Workshop on the History of Capitalism, Cambridge, MA, March 30, 2015 (with Joseph Fishkin)

“Constitution, Courts, and the South African National Political Economy,” (with Dennis Davis) at “Heterodox Innovations in Development Economics and Social and Economic Rights,” sponsored by the Radcliffe Institute and the Ecole du Droit, SciencesPo, Paris, France, May 18-19, 2014