The Shadow Docket: How the Supreme Court Uses Stealth Rulings to Amass Power and Undermine the Republic 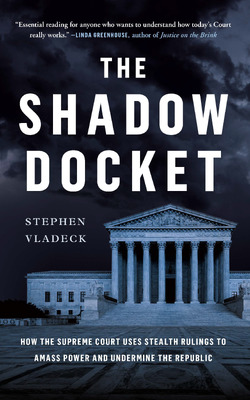 The Supreme Court has always had the authority to issue emergency rulings in exceptional circumstances. But since 2017, the Court has dramatically expanded its use of the behind-the-scenes "shadow docket," regularly making decisions that affect millions of Americans without public hearings and without explanation that leave lawyers—and citizens—scrambling.

The Court's conservative majority has used the shadow docket to green-light restrictive voting laws and bans on abortion, and to curtail immigration policies and COVID vaccine mandates. But Americans of all political stripes should be worried about what the shadow docket portends for the rule of law, argues Supreme Court expert Stephen Vladeck. In this rigorous yet accessible book, he issues an urgent call to bring the Court back into the light.

The book is set for publication in May 2023, and is now available for pre-order. For additional work on the shadow docket by Professor Vladeck, see his November 2019 essay in the Harvard Law Review; his September 2021 testimony before the Senate Judiciary Committee; and his April 2022 op-ed in the New York Times.

Stephen I. Vladeck (@steve_vladeck) holds the Charles Alan Wright Chair in Federal Courts at the University of Texas School of Law and is a nationally recognized expert on the federal courts, constitutional law, national security law, and military justice. Professor Vladeck has argued over a dozen cases before the U.S. Supreme Court, the Texas Supreme Court, and various lower federal civilian and military courts; has testified before numerous congressional committees and Executive Branch agencies and commissions; has served as an expert witness both in U.S. state and federal courts and in foreign tribunals; and has received numerous awards for his influential and widely cited legal scholarship, his prolific popular writing, his teaching, and his service to the legal profession.

Vladeck is the co-host, together with Professor Bobby Chesney, of the popular and award-winning “National Security Law Podcast.” He is CNN’s Supreme Court analyst and a co-author of Aspen Publishers’ leading national security law and counterterrorism law casebooks. He is editor and author of "One First," a popular weekly newsletter about the Supreme Court. And he is currently writing a book on the rise of the Supreme Court's "shadow docket," to be published by Basic Books in May 2023.

Vladeck joined the Texas faculty in 2016 after 11 years teaching at the University of Miami School of Law and American University Washington College of Law. He is an elected member of the University of Texas Faculty Council, in which he serves as Chair-Elect of the Committee of Counsel on Academic Freedom and Responsibility; an elected member of the American Law Institute; a Distinguished Scholar at the Robert S. Strauss Center for International Security and Law; and a senior editor of the peer-reviewed Journal of National Security Law and Policy. He is the Supreme Court Fellow at the Project on Government Oversight's Constitution Project; a Distinguished Fellow of the National Institute of Military Justice; and a member of the Advisory Committee to the ABA Standing Committee on Law and National Security, the American Constitution Society's Board of Academic Advisors, and the advisory boards of the Electronic Privacy Information Center and the RAND History of U.S. Military Policy.

A 2004 graduate of Yale Law School, Vladeck clerked for the Honorable Marsha S. Berzon on the U.S. Court of Appeals for the Ninth Circuit and the Honorable Rosemary Barkett on the U.S. Court of Appeals for the Eleventh Circuit. While a law student, he was Executive Editor of the Yale Law Journal and the Student Director of the Balancing Civil Liberties & National Security Post-9/11 Litigation Project, and he was awarded the Harlan Fiske Stone Prize for Outstanding Moot Court Oralist and shared the Potter Stewart Prize for Best Team Performance in Moot Court. He earned a B.A. summa cum laude with Highest Distinction in History and Mathematics from Amherst College in 2001 — where he wrote his senior thesis on "Leipzig's Shadow: The War Crimes Trials of the First World War and Their Implications from Nuremberg to the Present," and shared the Alfred J. Havighurst Prize as the outstanding senior History major. A native New Yorker and fatalistic Mets fan, Vladeck lives in central Austin with his wife, Karen (a Managing Director at Whistler Partners, and with whom he co-hosts the "In Loco Parent(i)s" podcast), their daughters, Madeleine and Sydney, and their nine-year-old pug, Roxanna.

Read more Stephen I Vladeck In the News posts.