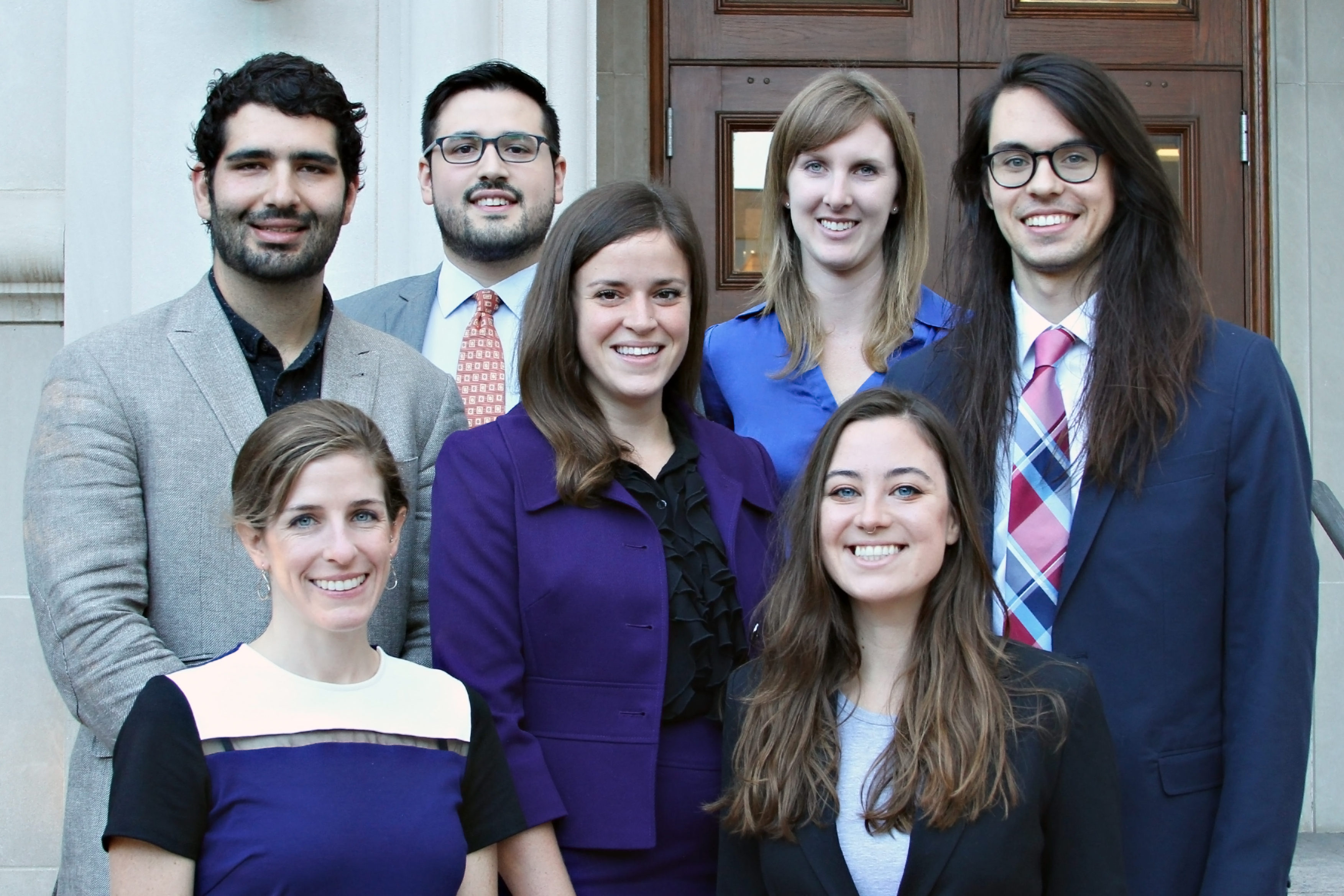 Wesley Hartman, ’18, is a leader on both the Include and Expunction projects as a Mithoff Scholar. In addition to helping people with disabilities and expunging criminal records, Wesley also assists transgender individuals legally change their name and gender marker with the Trans Name and Gender Marker Project. Outside of pro bono work, Wesley is a Staff Editor for The Review of Litigation and the Communications Director for OUTLaw. Wesley has a music background with a B.S. in Music and Theater & Drama.

Sarah Mae Jennings, ’18, is a leader of the Mithoff Program’s Expunction Project. She was a 2016 summer law clerk at the Public Defender Service for the District of Columbia and will join the Orleans Public Defenders Office in New Orleans for her 2L summer as a Gideon’s Promise Summer Law Clerk. In her 2L year, Sarah Mae has worked in the Capital Punishment and Criminal Defense Clinics, and will join the Civil Rights Clinic in the fall of her 3L year. Before law school, Sarah Mae was a Peace Corps Volunteer in Cameroon and a stand-up comedian in New Orleans.

Hudson Kyle, ’18, is the student leader of the Karnes Pro Bono Project, which is a partnership between the Mithoff Program, Texas Law’s Immigration Clinic, and RAICES (Refugee and Immigrant Center for Education and Legal Services). The Karnes Project takes student volunteers to a for-profit immigrant detention center two hours south of Austin. Most of the families detained at Karnes are Central American asylum seekers, and students work to get them released. Before becoming a Mithoff Scholar, Hudson volunteered at Casa Marianella’s citizenship and lodging clinics, and worked with immigrants detained at the Port Isabel Detention Center during the Pro Bono in January trip to the Rio Grande Valley. Hudson also is a two-time Immigration Clinic student, a Texas Law Fellowships board member, and a staff editor for the Texas Journal on Civil Liberties & Civil Rights.

Marissa Latta, ’18, is a leader of the Mithoff Program’s INCLUDE Project, which counsels individuals with disabilities about alternatives to guardianship. She spent her 1L summer working at Disability Rights Texas and has participated in Texas Law’s Transnational Worker Rights and Housing Clinics. Marissa also is the Programming Coordinator for the Public Interest Law Association and will be Editor-in-Chief of the Texas Journal on Civil Liberties & Civil Rights in 2017-2018. Before coming to law school, she worked as a case manager at a homeless shelter and a mental health agency.

Cristian Sanchez, ’17, leads the Mithoff Program’s Trans Name and Gender Marker Project, which provides transgender people with legal assistance in changing their name and gender markers. During the 2016-2017 academic year, Cristian expanded the Trans Name and Gender Marker Project so it could better serve clients while responding to increasing demand for its services. He also has been involved in other public interest legal projects and participated in Texas Law’s Civil Rights, Transnational Workers Rights, and Immigration Clinics. During his 2L summer, Cristian worked for the Immigrants’ Rights Project at the ACLU of Southern California. Cristian is the Vice-President of OUTLaw and on the board of the Chicano/Hispanic Law Student Association. Cristian was recognized by his peers and Texas Law Fellowships with an Excellence in Public Interest Award in 2017.

Elizabeth Schmelzel, ’18, is a leader of the Mithoff Program’s Expunction Project. She is particularly interested in “crimmigration,” or helping people caught in both the immigration and criminal justice systems. She has participated in Texas Law’s Immigration and Capital Punishment Clinics, and volunteered with the Expunction, Trans Name and Gender Marker, and INCLUDE Projects. Elizabeth also is a board member of the GRITS (Getting Radical in the South) conference and clerked for the Public Defender Service for the District of Columbia. Before attending law school, Elizabeth worked internationally for several years in China, Senegal, and London. Elizabeth is fluent in French, knows some Wolof and Mandarin Chinese, and is a three-time marathon finisher.

Alex Shahrestani, ’18, is expanding pro bono services for children through his roles as a Mithoff Scholar, president of Street Law, and co-president of Youth Court. Prior to being selected as a Mithoff Scholar, Alex served as a lead student volunteer for the Mithoff Program’s INCLUDE and Expunction Projects during his 1L year. Alex currently is working with the Mithoff Program and Texas Law’s Criminal Defense Clinic to develop a pro bono project challenging the criminalization of homelessness in Austin, and is writing software to automate the preparation of expunction petitions. He is an intern for Senator Royce West, for whom he is spearheading efforts to expand access to orders of nondisclosure of criminal records. Alex has worked as a legal intern at South by Southwest and the Electronic Frontier Foundation. Alex founded the Journal of Law and Technology at Texas Law, is a past speaker at SXSW Interactive, and plans to start his own legal and legislative practice after graduation.

Morgan Shelburne, ’18, is a leader of the Mithoff Program’s Expunction Project, and focused particularly on training law students to draft excellent petitions this year. Morgan also created a pro bono project to answer research questions for local reproductive justice organizations in partnership with the If/When/How student organization, and is an active volunteer with the Trans Name and Gender Marker Project. An aspiring public defender, Morgan has clerked with the Public Defender Service for the District of Columbia and the Public Defender Department at Texas RioGrande Legal Aid. Morgan participated in the Capital Punishment Clinic as a 2L and will participate in the Criminal Defense Clinic as a 3L. Morgan is the Vice President of Communications for If/When/How at Texas Law and a board member of the GRITS (Getting Radical in the South) conference. Before law school, Morgan spent a year in Indonesia with the Fulbright Foundation as an English teacher.