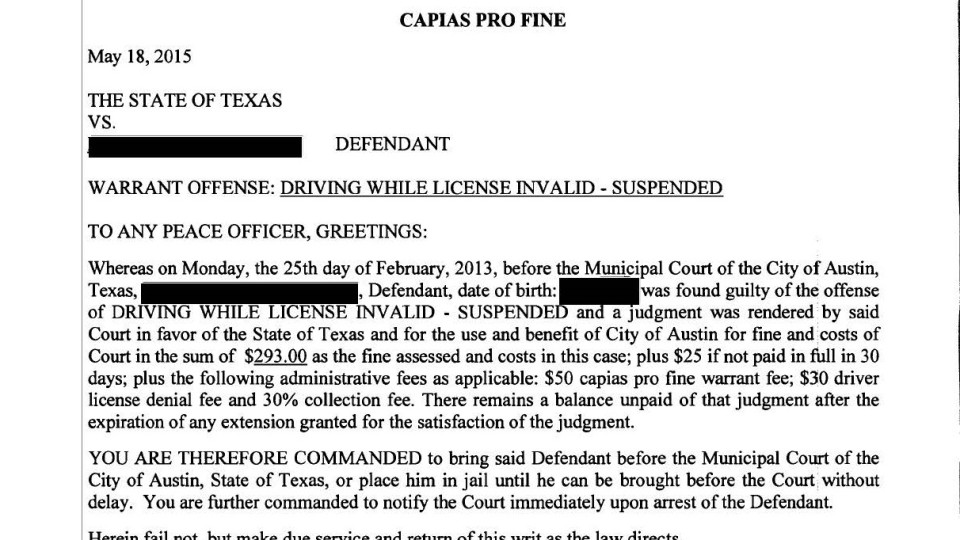 AUSTIN, TX (Oct. 27, 2015) – The Texas Fair Defense Project, the Civil Rights Clinic at the University of Texas School of Law and the law firm of Susman Godfrey LLP filed suit today against the city of Austin for unconstitutionally jailing low-income central Texans.

The complaint, Gonzales et al. v. City of Austin, filed in U.S. District Court, Austin Division, claims the city’s practice of jailing impoverished people who are unable to pay fines and fees arising from Class-C misdemeanors without: 1) appointing an attorney to represent them, 2) determining their ability to pay, and 3) considering alternatives (such as fines tailored to their ability to pay), is unconstitutional.

“Austin operates a debt-collection scheme that jails dozens of people each month because they are too poor to pay,” said Texas Fair Defense Project Executive Director Rebecca Bernhardt. “People in jail lose their jobs, their housing and struggle to care for their children. The city is pushing already-vulnerable individuals and families deeper into poverty.”

Class-C misdemeanors, such as jaywalking or failing to wear a seatbelt, are the lowest level of criminal offense in Texas and are punishable solely by fine. According to city data, the Austin Municipal Court jailed 67 people in the Travis County Jail for failure to pay Class-C debt in July 2015 alone. Over one-third of those jailed were committed for longer than a week.

“Being sent to jail was devastating,” said Valerie Gonzales, one of three named plaintiffs in the lawsuit. “I had no way to call family. I couldn’t tell my kids what was going on.”

Austin’s practice of jailing those who cannot afford to pay their misdemeanor tickets has a disproportionate impact on African Americans, as well. Although African Americans comprise 8 percent of Austin’s total population, they comprise 27 percent—18 of 67 people—of those jailed by the city in July 2015.

“Being poor is not a crime,” said Ranjana Natarajan, Civil Rights Clinic Director at the University of Texas School of Law. “We are asking the city to follow the law and implement alternatives like lower fines for low-income families, rather than imposing jail time. Austin should treat all of its residents with fairness and dignity, regardless of income level.”

The policy also costs Travis County taxpayers hundreds of thousands of dollars annually. Based upon a review of the July 2015 jail commitment orders for Class-C tickets, the city of Austin Municipal judges ordered 653 jail days for debt, which costs Travis County over $63,000 in jail operations.

The Texas Fair Defense Project (TFDP) is a civil rights law firm whose mission is to improve the fairness of Texas’s criminal courts and ensure that all Texans have access to justice. TFDP focuses on improving the public defense system and challenging policies that create modern-day debtors’ prisons filled with poor people who cannot afford to pay criminal judgment debts and commercial bond fees.

Plaintiffs are represented by Susanne Pringle, Emily Gerrick, and Rebecca Bernhardt with the Texas Fair Defense Project, Trisha Trigilio and Ranjana Natarajan at the University of Texas School of Law Civil Rights Clinic, and Joseph Grinstein and Vikram Swaruup at Susman Godfrey LLP.

For more than 35 years, Susman Godfrey has focused its nationally recognized practice on just one thing: high-stakes commercial litigation. It is one of the nation’s leading law firms, with offices in Houston, Seattle, Los Angeles and New York. For more information, visit http://www.susmangodfrey.com.