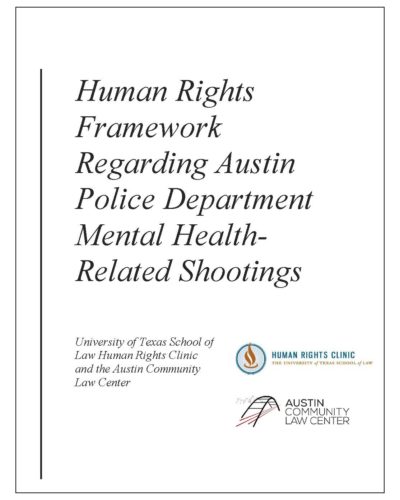 The Clinic collaborated with the Austin Community Law Clinic in addressing the way with which the Austin Police Department (APD) responds to mental health-related calls for service.  Currently, APD has one of the highest rates in the country of fatal police shootings of people suffering from mental health issues.  This was documented in a September 2018 report from the City Auditor’s Office, which attributed it to APD’s failure to adhere to several best practices adopted by other police departments.  In response, APD convened a “Mental Health Stakeholder’s Group” to come up with solutions.  The Clinic reviewed existing data, described how the APD’s current practices violate human rights norms and standards, and made recommendations to comply with human rights norms.  The Clinic and its partner distributed the final report to key stakeholders and developed pertinent advocacy strategies.