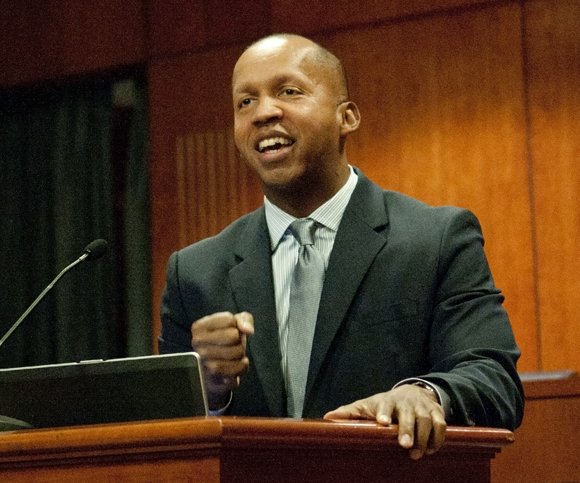 The Capital Punishment Center sponsors a range of events during the academic year, including conferences, lectures, and panel presentations. These events bring together students, faculty, practicing attorneys, judges and public leaders to examine issues related to the death penalty in Texas.

Brandon Garrett discussing his new book, “End of its Rope: How Killing the Death Penalty Can Revive Criminal Justice”

This year’s conference, “Mitigation Advocacy,” will discuss the growth of mitigation practice over the past 30-40 years along several dimensions: changes in best practices; empirical assessments of what “works” in mitigation development and presentation; the extension of mitigation practices to non-capital contexts; the importance of cultural competence in mitigation investigation; and the significance of mitigation to the practice of American capital punishment. The goal of the conference is to understand the evolving role of mitigation development and presentation in criminal litigation. We also hope to build momentum for the establishment of a mitigation program within UT’s Capital Punishment Center. The proposed program would bring together experts from a variety of disciplines at UT and beyond (law, social work, nursing, psychology, medicine, communications, journalism, etc.) to train students for careers as mitigation professionals and to research best mitigation practices (both within and outside of the capital context).

Please join the Capital Punishment Center faculty and a stellar group of nationally-renowned and local panelists for a retrospective examination of mitigation investigation in the modern era as well as group discussion of our vision for mitigation training and development moving forward.

“Mass Incarceration: How Did We Get Here?”
November 3, 2017, University of Texas School of Law

Author James Forman Jr.,  Professor of Law at the Yale Law School, reflects on his book “Locking Up Our Own: Crime and Punishment in Black America.”

This event is presented by the Capital Punishment Center, and co-sponsored by the William Wayne Justice Center for Public Interest Law.

This event is presented by the Capital Punishment Center, and the William Wayne Justice Center for Public Interest Law.

“Bryan Stevenson, Author of ‘Just Mercy'”
September 27, 2016, LBJ Auditorium, LBJ School of Public Affairs
Bryan Stevenson, a dynamic speaker and renowned lawyer, has represented capital defendants and prisoners for more than thirty years. He is a faculty member at NYU School of Law and the executive director of the Equal Justice Initiative in Alabama. Stevenson’s work has won him international acclaim, including the prestigious MacArthur Foundation “Genius” Award Prize and the Olaf Palme Prize in Sweden for human rights. Stevenson spoke as part of the Blandy Lectures, presented by the Seminary of the Southwest.

Co-sponsored by the UT Division of Diversity and Community Engagement and the William Wayne Justice Center for Public Interest Law.

“Comparative Capital Punishment Conference”
April 7-8, 2017, University of Texas School of Law
This conference, “Comparative Capital Punishment” will address the many commonalities (and some significant differences) in the worldwide movement away from the death penalty that began in the late eighteenth century and that sharply accelerated in the last half of the twentieth century. At the present moment, the industrialized West is an almost completely abolitionist zone (with the notable exception of the United States), while the death penalty is seeing a resurgence in some parts of the Middle East and Africa. This conference will look broadly and deeply at the practice of capital punishment around the world. There are many common themes even in apparently disparate parts of the world, such as the kinds of restrictions and reforms that usually precede abolition, the moral, political, and legal strategies of reformers and abolitionists, the forces that promote retention, and the distinctive possibilities and pitfalls of various pathways to change (legislative action vs. judicial intervention vs. international or transnational institutions and influences). The conference brings together experts on different regions and issues to evaluate the past, present, and future of the practice of capital punishment. 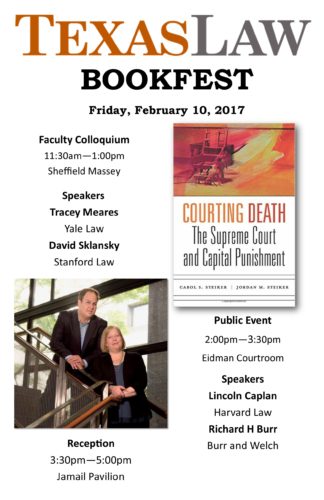 A gala barbeque lunch (with veggie options) was held, with special guests David Sklansky, of Stanford Law School, and Tracey Meares, of Yale Law School, offering commentary on the book.  That was followed by an early afternoon public panel looking closely at the years of research that went into the book and the ways in which the nation’s discourse on capital punishment, both in the mainstream consciousness and in the courts, has evolved in that time. The panel took place in the law school’s Eidman Courtroom, and featured the great legal journalist and New Yorker contributor, Lincoln Caplan, and distinguished attorney, Richard Burr.

GRITS is a student-run public interest law conference that focuses on the difficulties and constraints inherent to social justice work in the South. 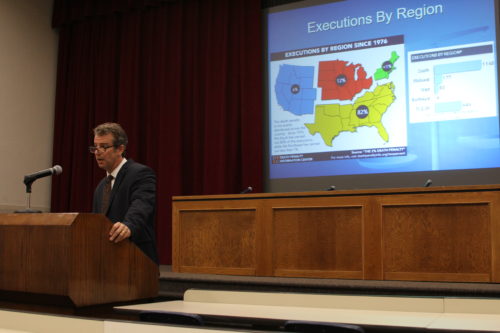 October 4, 2016,  University of Texas School of Law
“Capital Punishment in the U.S. Supreme Court, 2015 and 2016 terms” – the capital punishment faculty (Jim Marcus, Raoul Schonemann, Jordan Steiker, and Thea Posel) review the important death penalty cases decided by the US Supreme Court last Term and discuss the key cases – both from Texas – before the Court this Term.

“40 Years After Gregg: A National Conference on the Death Penalty”
March 31 to April 2, 2016, University of Texas School of Law

In 1976, the Supreme Court reinstated the death penalty in the United States in Gregg v. Georgia. In the forty years since that historic decision, the legal landscape has changed significantly, and the use of capital punishment has been the subject of passionate public debate.  As this anniversary presents a unique opportunity for reflection, we invite you to join us for a conference that will bring together some of the nation’s leading death penalty experts and practitioners to share their diverse perspectives, reflect on the dynamic history of capital punishment in the United States, and discuss the issues impacting the law today.

By facilitating discussions on a range of timely topics, “40 Years After Gregg” will be a unique forum to educate members of the legal profession and the public on the complex contours of death penalty law.  Panels will be led by preeminent judges, prosecutors, defenders, academics, current and former government officials, journalists, victims’ advocates, and other professionals whose work affects how this country uses and thinks about capital punishment. This conference is sure to be a meaningful – and fun – occasion to engage with and learn from a diverse array of people who care about our criminal justice system.
View the full conference program.

“Innocent Going In and Innocent Coming Out: The Exoneration of Alfred Dewayne Brown”
October 26, 2015, University of Texas School of Law

Alfred Dewayne Brown spent 10 years on Death Row in Texas for a crime he did not commit. He was released in June of 2015. Mr. Brown is the 13th person released from Texas’s Death Row, and the 154th person released from Death Row in the United States, since 1973. Come hear from two of Mr. Brown’s attorneys, Brian Stolarz of LeClairRyan and Casey Kaplan (UT Law 2007) of Nike, Inc. Mr. Brown joined his attorneys for this presentation.

“Latinos and the Death Penalty Program”
April 10-11, 2015, University of Texas School of Law

The Berkeley Law Death Penalty Clinic, Cornell Death Penalty Project and University of Texas Capital Punishment Center cordially invite you to a symposium on “Latinos and the Death Penalty” at The University of Texas School of Law on April 10-11, 2015. The conference brings together experts from a variety of fields (law, sociology, criminology, psychology, linguistics, history, and international relations) to illuminate a relatively unexplored aspect of the American death penalty. The program is free and open to the public. View the full program and event poster (PDF).

“Mass Incarceration and the Death Penalty”
March 22–23, 2013, University of Texas School of Law

A symposium focusing on the historical link between lynching and the death penalty, their similarities and differences, and the enduring role of lynching and race discrimination in contemporary capital litigation. News Release.

“The American Death Penalty in the 21st Century: The Direction of Legislative Change and the Prospects for Legislative Abolition”
April 9–10, 2010, University of Texas School of Law