University of Texas School of Law Professor Julius G. Getman’s new book, Restoring the Power of Unions: It Takes a Movement, has been chosen as the best book on labor organizing in the private sector by Union Privilege, the member benefits arm of the AFL-CIO.

The book, published by Yale University Press, will be released on June 27. 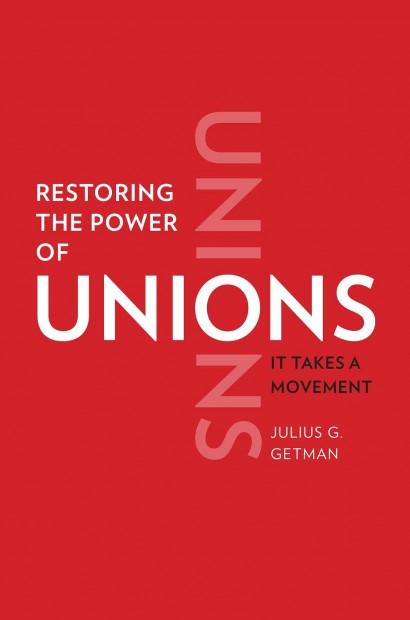 Union Privilege plans to purchase two hundred copies of Getman’s book to distribute to union leaders throughout the country. An additional two hundred copies will be bought by UNITE HERE, a labor union representing hotel, restaurant, and garment workers in the United States and Canada. The book will also be the main topic of discussion for the Labor and Employment Law Section of the Association of American Law Schools at its January 2011 meeting in San Francisco.

In his book, Getman, a preeminent labor scholar, examines recent developments to demonstrate that a resurgent labor movement is possible. He proposes new models for organizing and innovative techniques to strengthen strikes. Above all, he insists that unions must return to their historical roots as a social movement.

The story of UNITE HERE is also featured in the book, dating back to the labor union’s now legendary organization of Yale University’s clerical and technical workers. Getman tells the story of the union’s leaders and members through their own words, derived from interviews from the past twenty-five years.

An interview in the book by Getman with the late labor organizer Crystal Lee Sutton was also the focus of a recent article by Ben Smith in Politico.com. Getman describes a tense relationship between Sutton, whose efforts to help organize a North Carolina textile mill were fictionalized in the 1979 Academy Award-winning film Norma Rae, and prominent labor leader Bruce Raynor, president of Workers United, an affiliate of the Service Employees International Union.

Restoring the Power of Unions is the tenth book written by Getman, who also wrote a 1976 classic field study on union organizing based on thousands of interviews with workers throughout the Midwest who were scheduled to vote on union representation.

In his early study and current book, Getman regularly takes positions that are contrary to orthodox union opinions. For example, Getman is critical of the Employee Free Choice Act, proposed legislation that unions strongly support.

Getman is scheduled to talk about his latest book at Yale at a September event sponsored by a local chapter of UNITE HERE and the Yale Law School’s Worker and Immigrant Rights Advocacy Clinic. The same month, he will also give lectures in New York at St. John’s University and for the Catholic Worker.

Getman is a preeminent scholar in the field of labor law, in which he pioneered empirical studies and continues to do extensive field work. He is the Earl E. Sheffield Regents Chair Professor of Law at the University of Texas School of Law.

He came to Texas in 1986 from Yale Law School, where he was the William K. Townsend Professor of Law. He has also taught at Stanford Law School, the University of Chicago Law School, and Georgetown University Law Center.

He is author of The Betrayal of Local 14: Paperworkers, Politics, and Permanent Replacements (Cornell, 1998) and In the Company of Scholars: The Struggle for the Soul of Higher Education (Texas, 1992); and coauthor of both Union Representation Elections: Law and Reality (Russell Sage Foundation, 1976) and Labor Relations: The Basic Processes, Law, and Practice (Foundation, 1988). He edited a 2004book of essays, The Future of Labor Unions: Organized Labor in the 21st Century, with LBJ School of Public Affairs Professor Emeritus and former U.S. Secretary of Labor Ray Marshall.

Getman is a former president of the American Association of University Professors. In 2007, Getman’s first novel, Strike!, was published by Plainview Press.