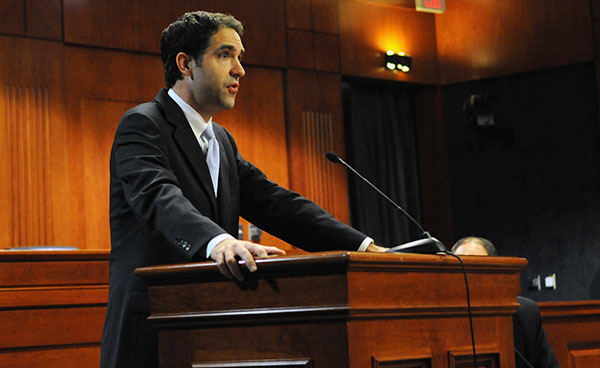 President Barack Obama announced intelligence gathering reforms in a speech Friday in response to intelligence leaks and disputes about the National Security Agency’s surveillance programs. Professor and national security expert Bobby Chesney listened to Obama’s NSA speech, live tweeted it from @BobbyChesney and shares his reaction to the much-anticipated speech below.

“Today’s NSA speech was striking for its modesty and moderation. On the flashpoint issue of phone metadata, he surprised some observers by firmly endorsing the need for NSA to be able to analyze such records, but he also revealed that he is constraining NSA’s ability to do such analysis by requiring NSA to obtain judicial approval in advance of any search of the data—and he also called for further study of whether such analysis could still be done if the records were simply kept in the hands of the various companies involved, or perhaps in the hands of a third party. On the surveillance of foreign leaders, he revealed sharp limits on the practice when it comes to close allies only, and made clear that even then there would be exceptions in some instances. Perhaps the most concrete element — endorsing the creation of special advocates to oppose the government’s positions in front of the Foreign Intelligence Surveillance Court (the FISA Court) — is one that ultimately will depend primarily on Congress to develop.”

Chesney began his directorship of the Robert S. Strauss Center for International Security and Law on Jan. 16. Listen to his pre-NSA speech interview with KUT radio and follow his Lawfare Blog for further analysis.