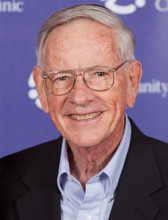 Texas Law alumnus Ray Farabee, ’61, who parlayed success as a Wichita Falls attorney into subsequent careers in the Texas Senate and the University of Texas System, died on Thursday. He was 81 years old.

Farabee was first elected to the Senate in 1975. He represented the North Texas-based Senate District 30 as a Democrat through seven legislative sessions. He resigned his seat in 1988 to take the position of general counsel for the UT System. He retired in 2000.

His Senate career was marked by pioneering work on end-of life decisions, AIDS, mental health treatment, the prison system and the issuing of state debt. Along the way, he earned the nickname “Fairabee” for his ability to work across the aisle.

He told the Wichita Falls Times Record News in a 2007 profile that, “Certainly I got along with just about everybody. That didn’t mean they went along with me or I went along with them … I think that it was approaching issues in an open-minded way and being willing to listen to other people and their opinion.”

Texas Monthly awarded him a spot on its “Best Legislators” list for each of his final five sessions.

His first wife, Helen J. Farabee, was also an attorney and well known for her work to improve mental health services in Texas. She died in 1988.

A son, David Farabee, continued the family political legacy when he was elected in 1998 as a Democrat to represent Wichita Falls. He served for six terms before retiring.

According to the Farabee family, a memorial service will be held in the Capitol’s Senate Chamber at 2 p.m. on Dec. 5. A private burial at the Texas State Cemetery will follow on Dec. 6. Services are under the direction of Weed-Corley-Fish.