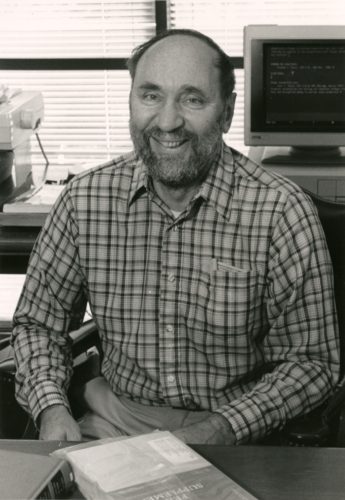 Prof. Hamilton graduated from Swarthmore Collection in 1952 and earned his J.D. from the University of Chicago Law School in 1955. After graduation, he clerked for U.S. Supreme Court Justice Tom C. Clark. He spent eight years with Gardner, Morrison & Rogers in Washington, D. C. before joining the Texas Law faculty in 1964 where he stayed until his retirement in 2004. He was a member of the American Law Institute and a Fellow of the American Bar Foundation. Professor Hamilton’s wife, Dagmar Hamilton, is Professor Emeritus of Public Affairs at the Lyndon B. Johnson School of Public Affairs.

Prof. Hamilton was a nationally recognized corporations and corporate-law scholar and a prolific author of casebooks, treatises, and study aids in those fields. He received Texas Excellence Teaching Awards in 1970 and 1973.

“Bob properly prided himself about his teaching and cared as much about it as any one at the law school,” said Prof. Lucas A. Powe, Jr., who served on the Texas Law faculty with Prof. Hamilton for over thirty years.

The Robert W. Hamilton Book Award was established in 1998 in Hamilton’s honor for his service as the chairperson of the University Co-Op board of directors. Hamilton served as chairperson for twelve years before stepping down in 2001. The annual award is given to faculty or staff members who have published the best book-length publication for the preceding year as determined by a committee of scholars appointed by the University’s Vice President for Research. (The most recent winner of this award is Prof. Jordan Steiker, holder of the Judge Robert M Parker Endowed Chair in Law and the co-director of the School of Law’s Capital Punishment Center, who received the prize in October 2017 for his book, Courting Death: The Supreme Court and Capital Punishment, which was co-written with his sister, Harvard Law School Prof. Carol Steiker.)

Among his many accomplishments, Bob Hamilton was the Reporter for the Revised Model Business Corporation Act and authored the Official Text with Comments, adopted in 1984.  He was appointed by the Atomic Energy Commission in 1974 to chair public hearings on nuclear waste management and disposal at the Hanford Reservation near Richland Washington and was appointed in 1979 by the U.S. Department of Energy to serve as chairman for public hearings on the environmental impact of storing nuclear waste in the eastern New Mexico salt beds.

A memorial service will be held at 11 a.m. on Saturday, February 17, at Westlake Hills Presbyterian Church at 7127 Bee Caves Road in Austin.