On February 26, beloved Prof. David Anderson ’72 was honored with a celebratory resolution in the Texas House of Representatives, marking his retirement from the faculty of The University of Texas School of Law. The resolution was introduced by his former student, the Hon. Oscar Longoria ’07, Representative for Texas’ District 35. 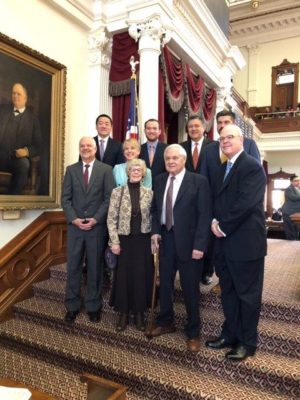 “For many years Texas Law, and indeed the city of Austin itself, has benefited from David’s brilliance in ways that are difficult to quantify,” remarked Dean Ward Farnsworth upon learning of Anderson’s honor at the Capital. “His gift for engaging students in vigorous and productive debate, and his contributions to the Academy will be felt far into the future. I am proud to be his friend and to have served as his Dean.”

Anderson, who earned his undergraduate degree at Harvard University, worked for several years as a political journalist before attending law school. As a Texas Law student, Anderson was named a Chancellor and served as an editor of the Texas Law Review. He joined the school’s faculty in 1972. During his 45 year academic career, Anderson taught torts, mass media law, First Amendment law, and a seminar on fiction by lawyers. He is the Fred & Emily Marshall Wulff Centennial Chair Emeritus in Law. Anderson brought his expertise to universities all over the world, lecturing at institutions in Australia, England, Sweden, Italy and The Netherlands.

He is co-author of Mass Media Law (Foundation, 9th ed., 2016) and Cases and Materials on Torts (West, 4th ed., 2011). Professor Anderson has also published two non-law books, one about domestic architecture and one a memoir about the life and death of a remote plains community.

The resolution not only honors Prof. Anderson’s distinguished academic career, but also his service to the state as chief counsel to the Texas Judiciary Council, the policy-making body for the state judiciary, and his role as advisor to the Constitutional Convention of 1974. 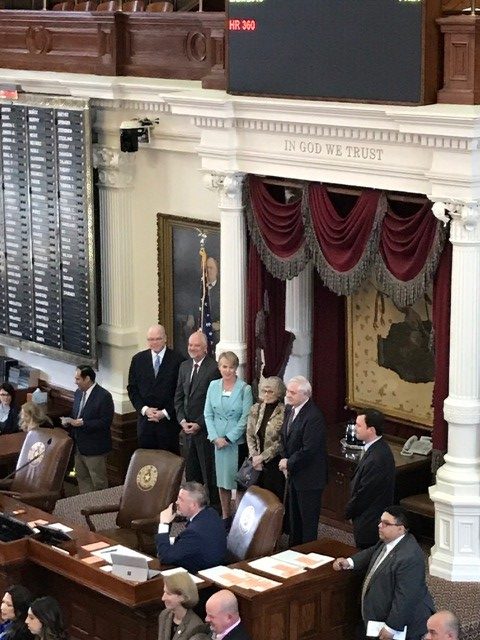 The full resolution reads as follows.

WHEREAS, David Anderson retired from the faculty of The University of Texas School of Law on January 18, 2018, concluding an exemplary career that spanned more than 45 years; and

WHEREAS, David Anderson earned his law degree at UT and joined the school ’s faculty in 1972; he became one of the nation ’s foremost experts on the First Amendment, free speech, mass media law, and torts, and many of his students have gone on to national prominence; and

WHEREAS, Professor Anderson lectured at universities in Australia, England, Sweden, Italy, and the Netherlands, and he authored or coauthored five books, including two casebooks, as well as more than 50 scholarly articles; and

WHEREAS, He also served the state as chief counsel to the Texas Judiciary Council, the policy-making body for the state judiciary, and as an advisor to the Constitutional Convention of 1974; and

WHEREAS, Over the course of his distinguished tenure, David Anderson earned the respect and admiration of innumerable people, and his contributions to The University of Texas and to the legal community will continue to resonate for years to come; now, therefore, be it

RESOLVED, That the House of Representatives of the 86th Texas Legislature hereby honor David Anderson for his exemplary service to The University of Texas School of Law, congratulate him on his retirement, and extend to him sincere best wishes for the future; and, be it further

RESOLVED, That an official copy of this resolution be prepared for Professor Anderson as an expression of high regard by the Texas House of Representatives.