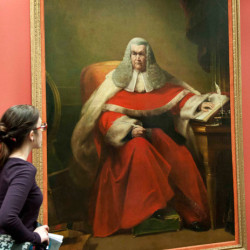 Hyder Collection finds a permanent home at the Law School

For more than half a century, students at the Law School have enjoyed the Hyder Collection—thousands of legal-related art pieces on semi-permanent loan and displayed throughout the school that, in addition to their aesthetic value, have served to provide a social and historical context for the study of the law. Now, thanks to the efforts of many, a large part of that collection has found a permanent home at the school.

Elton M. Hyder III, ’80, president and CEO of EMH Corporation of Fort Worth, Texas, was elected to the Federal Reserve Bank of Dallas Board of Directors by its member banks on October 21, 2010. Hyder’s three-year term began January 1, 2011.