Argentina: Advocacy campaign on the right to health and to a healthy environment in Abra Pampa, Argentina

Metal Huasi, a Foundry/Smelter company, operated in the town of Abra Pampa, Jujuy, in Northern Argentina, from the 1950s until 1986. There were three areas within the town where the smelting plant’s waste was deposited. Because of that, there are high levels of contamination and lead in the blood of Abra Pampa’s residents, particularly the children. There have been a series of government efforts to clean up the disposal sites but government action has yet to include plans for addressing the health needs of the community. 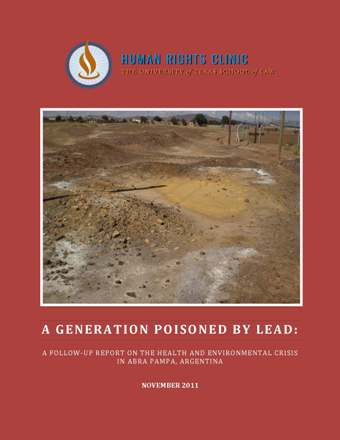 As the result of a sustained research project (including several fact-finding missions to Argentina), the Clinic produced two reports “Abra Pampa: a Community Polluted, a Community Ignored” in 2009 and “A Generation Poisoned by Lead” in 2011.  Based on the findings of the Clinic, the Inter-American Commission on Human Rights and several UN Special Rapporteurs requested information from the Argentine government on the plan to remedy the situation and provide health care to the inhabitants of Abra Pampa.  A UN Special Rapporteur referred to the work of the Human Rights Clinic in his report.

In December 2015, the Human Rights Clinic submitted a complaint with the Inter-American Development Bank (IDB) with regard to the Loan to Argentina financed by the IDB to develop a pilot program to remediate the environment in Abra Pampa. In representation of long-time Abra Pampa residents, the Human Rights Clinic addressed serious concerns regarding the IDB’s failure to enforce relevant IDB’s operational policies on prior consultation of indigenous peoples, access to information, and environmental compliance standards. In particular, the Clinic complained about the lack of health plan and the violation of the right to health of the residents. In April 2016,students traveled to Washington, DC and met with representatives of the IDB to followup on the complaint.

As a result of the Clinic’s work, the Argentine government removed the toxic waste from the town of Abra Pampa. Then, in spring of 2016, a health plan for the residents there was announced.

In addition to producing the reports, the Human Rights Clinic collected many documents on this issue and made them available to the public.  These documents can be found here:  http://repositories.lib.utexas.edu/handle/2152/18848