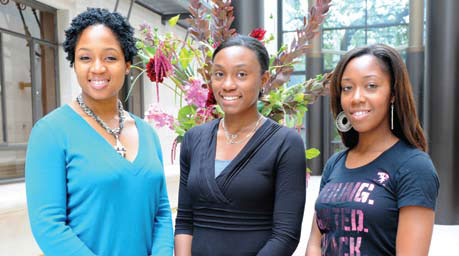 The Law School i s home to many student-run journals, ranging from the Texas Hispanic Journal of Law & Policy to the Texas Journal of Women and the Law to the Texas Review of Entertainment & Sports Law to the Texas Law Review. But there is no student journal dedicated to studying African Americans and the law. That did not stop a few enterprising Law School students from participating in the publication of such a journal, however. Tiffany Johnson, Catherine Moran, Jessica Kemp, Ja-Mes Sloan, Sheria Smith  and Britney Harrison serve as editors of the National Black Law Journal, a student journal coedited by students at Columbia Law School in partnership with another law school. For the past two years, that other school has been UT Law.

The journal began publishing at the University of California, Los Angeles, School of Law in 1970, but moved to Columbia when African American enrollment at UCLA declined after passage of California’s Proposition 209 in 1996. According to articles editor Johnson, the NBLJ reaches out to students at other law schools to participate in its publication, and every two years, the NBLJ is published through another law school. Johnson, a third-year law student originally from Oakland, California, said she and her fellow staff members sought out the NBLJ last year to request that UT Law students be part of one of the next issues. Producing a journal with a staff based in such distant cities might have been a logistical nightmare, but the students used technology to keep track of production matters. “With the people at both schools, we couldn’t have a meeting room,” Johnson said. “So we had to do almost everything over the phone with Skype [a software application that allows users to make voice calls over the Internet]. Though we did travel, as well, and everybody got to meet a couple of times.”

The distance had some advantages, as well. “It was cool working with students from the Northeast rather than the South,” Johnson said. “You get different perspectives, see how other students think, find out about their law school experience. You can get sheltered staying at one school.” During 2009 and 2010, the NBLJ published issues on drug sentencing and race, and desegregation in education. The desegregation and education issue included five articles, each examining the issue in a different state. Johnson said the experience had bee  positive for the Columbia students as well. “They’ll continue to work with us as long as the interest is there,” she said.— Julien N. Devereux