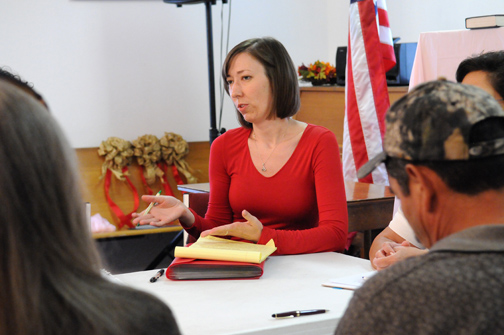 The small colonia of Rancho Vista sits about a ten-minute drive from Interstate 35 in the rural outskirts of San Marcos.  In Spanish, the term colonia simply means a community or neighborhood. The Office of the Secretary of State of Texas, however, defines a colonia as a residential area lacking some of the most basic living necessities, such as potable water and sewer systems, electricity, paved roads, and safe and sanitary housing.

Rosa Martinez, a resident of Rancho Vista, had trouble getting a clear title to the trailer she lived in, and she was worried.  If she missed a payment at any time, she could have been in danger of losing her property.  When she initially tried to obtain the title, there was a lien on it, and she was unable to acquire it or find someone to assist her in the process.  Upon hearing that numerous people in the community of Rancho Vista had sought help with the University of Texas Law School’s Community Development Clinic, however, Martinez decided to take the same route.

“The students worked with me step by step to get the title for my trailer,” Martinez said.  “They helped me with all of the necessary paperwork, and told me everything that I needed to do to get the title, and it worked.  Now, they’ve been helping people in the community.  Everyone has been great, including [Community Development Clinic Director] Heather Way.  Our goal is to see if we can help the people in the community, so they can get real houses.  The students in the clinic have been really involved with us.”

After several Law School students helped the citizens of Rancho Vista, the community decided to seek the Clinic’s assistance in forming a nonprofit organization to help remedy the structural problems of many of the homes in Rancho Vista.  Clinic students started work on the project in the spring of 2010.  On November 21, 2010, Rosa Martinez became president of the Cottonwood Creek Community Development Corporation, Rancho Vista’s new nonprofit organization.

“The nonprofit is for the residents to address housing conditions in the community,” Heather Way, Director of the Community Development Clinic, said.  “They are looking to have a nonprofit to help access funding and facilitate partnerships with different entities to rehabilitate homes, to build new homes, and to implement weatherization improvements that will help lower families’ utility bills. The nonprofit is important because it will enable the  community to access  government funding and other resources that they would otherwise not be able to.”

In the fall of 2010, two of the Clinic’s third-year law students, Epiphanie Marquez and Chris Kirk, began working with the community to get the organization up and running.

“If you’re a nonprofit, you’re able to apply for grants and tax exemptions that other organizations may not be able to apply for,” Marquez said.  “We put together the certificate of formation, which is what needs to be filed with the secretary of state, so now they are officially recognized as a nonprofit organization in the state of Texas.  Now, we are composing the bylaws.”

Weekly meetings are held on Sunday afternoons, and thirteen community director-members have been assigned specific duties.  They are required to pay dues in order to be considered full members.  Each director is a community member who has had structural or technical issues with his or her home.  Most of them have previously worked with the Community Development Clinic to obtain titles to their land.

“They were having issues with taxes on their homes.  They felt their taxes spike dramatically and it was too much for them to afford,” said Anastasia Cunningham-Thomas,’09 , a former Clinic student attorney who worked with Rancho Vista residents in 2008.  “We helped them realize some of the options they had including the exemption, as something they could do to lower the amount of taxes they had to pay.”

Unfortunately, most of the people who own homes in the community have acquired their home by informal agreements or contract for deeds, rather than purchasing the home outright.  These arrangements are less expensive in the short-term, but in the long-term could cause serious problems if residents are not able to make their payments.

“Back in the seventies, many people purchased land loosely, not with a traditional mortgage,” said Courtney Davis, ’09, another former Clinic student attorney who worked at Rancho Vista in 2008.  They used ‘Contract for Deeds,’ ” “So what that means is that they don’t own it, and they don’t receive title until they make the last payment on the land.  What we did was help them convert the contract into a traditional ownership, so that they could own their homes.”

For a mobile home owner to receive the exemption, they have to go through several channels.  After they have secured the title under their name, they have to take their statement to an appraisal district to determine the worth of the property.  Then they must take the paperwork to the county clerk’s office for approval.  The entire process has to be completed within sixty days.

“We are planning legislation for the next term,” said Allison Schmitz, a second-year law student and Clinic member.  “The most effective way to improve the situation is to change the tax code so they can get the tax exemption.  We want to change this so they won’t have to go through a lengthy process to get the exemption.  There’s no guarantee it will pass, but the plan is to leave them with some talking points so that they understand why it is important.”

[Editor’s note: The legislation the community development clinic students drafted and worked on to help mobile home owners get their homestead tax exemptions became law. It goes into effect January 1, 2012.]

Rancho Vista residents still face many challenges. However, with the Community Development Clinic assisting them with their nonprofit organization and proposed legislation to make securing tax exemptions easier, the community is in high spirits.  —Mark Lopez