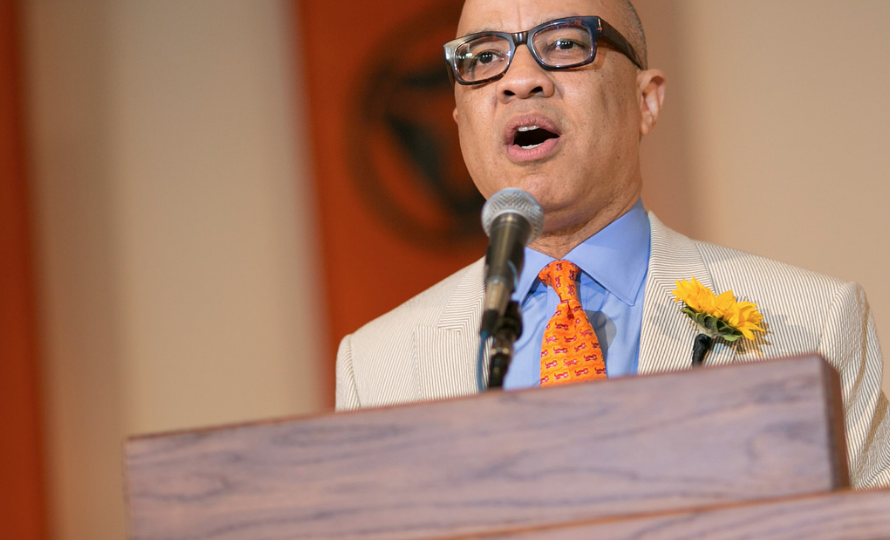 Below are the prepared remarks Darren Walker ’86 delivered to the Texas Law Class of 2016 at the Sunflower Ceremony on May 21. For more of Mr. Walker’s inspiring words and deeds, visit the online library of the Ford Foundation.

Thank you, Dean Farnsworth.  It is wonderful to be back on the Forty Acres.  I spent seven of the most glorious years of my life, formative years, on this great campus. And while I live in New York City, returning to Austin always feels like coming home.

As I remember it, law school was the best, hardest experience of my life.  I felt so proud to walk up the steps of Townes Hall each morning. I was inspired and challenged by the great faculty.   And I made friends and built relationships that remain with me today.

Today, as someone who travels in circles outside Texas, I can say one thing with certainty: Far beyond the borders of this state, this degree—and this institution—has a reputation for excellence, and for producing excellent lawyers. When I think about outstanding law school, and its impact on my life, one simple word always comes to mind: Prepared.

Now this might seem like a pretty boring, unimpressive word.  But there’s a big idea in it.  So let me tell you what I mean.

For most of the 20th century, a law degree prepared you to be a lawyer.  In the 21st century, a law degree prepares you to be anything you want. And no matter where I’ve worked—from the law firm to the trading floor; from the streets of Harlem to the halls of the Ford Foundation—I have always found that Texas Law prepared me for the task at hand. And I have come to more fully understand why the sunflower is our “distinctive insignia.”

The words in your program explain it this way:

The sunflower belongs to a family with worldwide distribution. So, also, do lawyers. And as the sunflower always keeps its face turned to the sun, the lawyer turns to the light of justice.

After graduation, I went to New York to work at Cleary Gottlieb.  Leaving Texas for New York was a big risk, but I knew that something extraordinary was in store.   Like the title character in Lin-Manuel Miranda’s hit Broadway musical Hamilton, as I went to New York in the summer of 1986 I thought: “In New York, you can be a new man.”

So I joined Cleary Gottlieb where I was surrounded by lawyers from all over the world, from every top school. They were among the best, anywhere. But Texas had prepared me. Texas equipped me to succeed, to be a global citizen.

Graduates: You, too, are world-class lawyers and global citizens.  Because Texas Law produces more than just Texas lawyers, or Texas leaders.  It produces lawyers and leaders who can change the world.  And, today, the world desperately needs you.

After my time at Cleary Gottlieb, I went to work at the investment bank UBS.  It was a big change. But, again, I was prepared.

And yet, like Miranda’s Hamilton, “I wasn’t satisfied.” Because while Texas Law had prepared me to succeed, it also imparted to me a desire to contribute to society – to turn to the light of justice.

That’s when I saw the most startling thing in the early 90s: the cover of theEconomist magazine.  Over a photo of a little boy, who looked like me when I was young, the cover line said: “America’s Wasted Blacks.”

As the article made clear, this young boy in Harlem—for a variety of reasons—didn’t enjoy the same opportunities I had, be they Head Start, or Pell Grants, or an incredible public education at a place like University of Texas. That article was a defining moment in my life.

I started volunteering for an organization called the Children’s Storefront School. And when I realized that community development was my calling, I went at it with gusto.

I went to work for the Abyssinian Development Corporation in Harlem.  It was the early 1990’s—and Harlem was a very different place.

It was the height of the crack epidemic.  Back then, you would walk through Harlem and see brownstones boarded up. You could saw crack vials on the sidewalk and stoops.  You could walk into the bodega and see mostly expired food. And more than the burned out buildings, I saw the interplay of power, politics, and justice.

So I moved from my nice penthouse apartment in midtown to 120th Street. I saw how entrenched systems and structures continued to disenfranchise and disadvantage the people of Harlem. And I understood, more than ever, how advantaged I was because I had a law degree.

I understood the laws, and the levers of power.  And I had a set of skills that most did not.  These skills gave me—as they give you—the capacity to negotiate change, because as lawyers we can navigate the system.

So I put those skills to work, and started listening to the community to see what we could accomplish together.  And with community input we did something pretty basic, but desperately needed: We built Harlem’s first full-service supermarket.

Getting the supermarket built was a major challenge, and is just one example of what lawyers are uniquely equipped to do at the intersection of power, politics, and justice—and how we can bring justice to those long denied it. Because while your degree may make you a doctor of laws, your Texas education makes you a seeker of justice.

My Texas education has also prepared me to be President of the Ford Foundation, where turning towards the light of justice means shining a spotlight on inequality in all of its forms.

You can fight for children in the slums of Brazil or the poor wards of Houston and Dallas. You can make justice a part of whatever you do—even if it’s just giving free legal advice to your friends and family.

Because while this work for justice can happen anywhere—it is needed everywhere. And you, Texas law graduates—you are prepared to go wherever you are needed.

By now, you may have realized, I’m slightly obsessed with the musical Hamilton. I’ve seen it six times, including on opening night. My friends and partner are fatigued by my constant references, but I can’t help myself.

I’ve been inspired by this young Alexander Hamilton, an ambitious immigrant who refuses to let opportunity slip away.  And at a critical point, early in the musical he says that he’s not “throwing away his shot.”

It reminds me of how I felt when I was your age, and I’m sure it’s how you feel today. Because for Hamilton the man, a major turning point in his life was when he became Hamilton the lawyer.

It prepared him for the trials and triumphs to come.  It was his pathway to public service.  And it is through the lens of the law that we see Hamilton’s participation at the Constitutional Convention, his authorship of the Federalist Papers, his time at the Treasury Department.

And the lens of the law will serve you well, too—no matter what your calling may be. Texas Law has prepared you for anything.

So graduates: Do not stop. Do not throw away your shot; your shot at contributing to a world that’s counting on you; your shot at working within systems of power to change them; your shot at delivering justice for those who need it most.

Congratulations, fellow UT alumni, on this moment filled with promise—a moment for which you’ve spent your lives preparing; a moment that signals your preparation for life.

Keep turning to that beautiful light of justice, wherever you find it shining.