Congratulations are due to Dr. Melynda Price ’02 on her historic appointment to the directorship of the John R. Gaines Center for the Humanities at the University of Kentucky. Dr. Price becomes the first woman and the first African American to lead the center. In addition to her J.D. from Texas Law, the ninth-generation Houstonian holds a doctorate in political science from the University of Michigan and her B.A. from Prairie View A&M University. She has been back to the law school multiple times since graduation as a guest speaker at the Capital Punishment Center and as an in-residence fellow, and two years ago she was a fellow at Princeton’s Law and Public Affairs Institute with her former Texas Law professor, David Rabban.

Read more about Dr. Price and her new role in the UKNOW article below, reprinted with permission from the authors and the University of Kentucky. 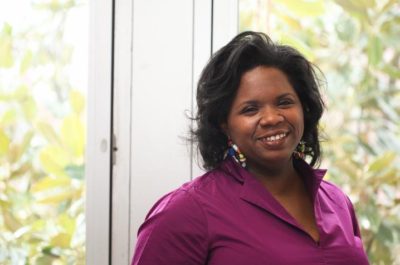 LEXINGTON, Ky. (Feb. 19, 2019) — The next director of the John R. Gaines Center for the Humanities has been named by the University of Kentucky Division of Student and Academic Life subject to approval by the Board of Trustees. If approved, the William L. Matthews Jr. Professor of Law and former director of UK’s African American and Africana Studies Program, Melynda J. Price, will take over the directorship and the position of John R. Gaines Endowed Chair in the Humanities. Her appointment is historic in that she will become the first woman and African American to lead the center.

“We are thrilled to welcome Dr. Melynda Price to this new role — one which will extend her already deep and dynamic influence on our campus,” said UK Provost David Blackwell. “Dr. Price’s accomplishments in research, examining issues at the forefront of important national dialogues, parallel her excellence in the classroom. She is an enthusiastic, compassionate and energetic teacher who radiates a love of learning and passion for academic and personal growth. I’m confident that, under her leadership, the Gaines Center for the Humanities will further strengthen its role as a vital, intellectual link between the campus and community.”

The Gaines Center, established in 1986, functions as a laboratory for imaginative and innovative education and is dedicated to cultivating an appreciation of the humanities in UK students and faculty. This is primarily accomplished through the awarding of student fellowships and by offering numerous symposia, seminars and lectures aimed at promoting dialogue, intellectual exploration and partnerships among campus, Bluegrass and Commonwealth communities.

Gaines Fellows are selected from across the UK student population (from any major) based on outstanding academic performance, a demonstrated ability to conduct independent research and a desire to enhance understanding of the human condition. Gaines Fellows complete a jury project in their junior year aimed at community improvement (on campus, in Lexington, or in the larger world). As seniors, fellows complete a major independent study under the direction of a faculty committee.

In her role as director, Price will provide oversight, direction and intellectual leadership to the center’s numerous activities, as well as supervision of the Gaines Fellows’ jury projects.

Price said that she is “honored to continue the legacy of the Gaines Center and to work in this place that’s such a symbol of the university’s commitment to expand the humanities throughout our community.”

Associate Provost for Student and Academic Life Greg Heileman was excited about Price’s selection. “The humanities play a crucial role in developing informed and critically engaged citizens. I am confident the center, under her inspired leadership, will broaden its tradition of imaginative and innovative humanities education and will further strengthen our campus link to greater Lexington.”

​Price joined the UK College of Law as an assistant professor in the fall of 2006 after completing a doctorate in political science at University of Michigan. She also serves on the faculty of UK College of Arts and Science’s African American and Africana Studies Program and Department of Gender and Women’s Studies.

In addition to her degree in political science, Price also holds a juris doctor from the University of Texas School of Law. She completed her undergraduate studies in physics at Prairie View A&M University.

Price’s research focuses on race, gender and citizenship, the politics of punishment and the role of law in the politics of race and ethnicity in the U.S. and at its borders. In 2008, she was awarded a Ford Foundation Diversity Postdoctoral Fellowship. Price is the author of “At the Cross: Race, Religion and Citizenship in the Politics of the Death Penalty.” Her work has been published in both peer-reviewed social science and law journals, newspapers and literary journals.