February 7, 2020
Texas Law is proud to share that the class of 2020 Chris Marshall Endowed Presidential Scholarships were awarded to four outstanding students. These scholarships are given annually to third-year students who have distinguished themselves academically and plan to remain in Texas after graduation to practice public service law in non-profit, government or legislative positions. We reprint, with permission, the full article from the William Wayne Justice Center here. 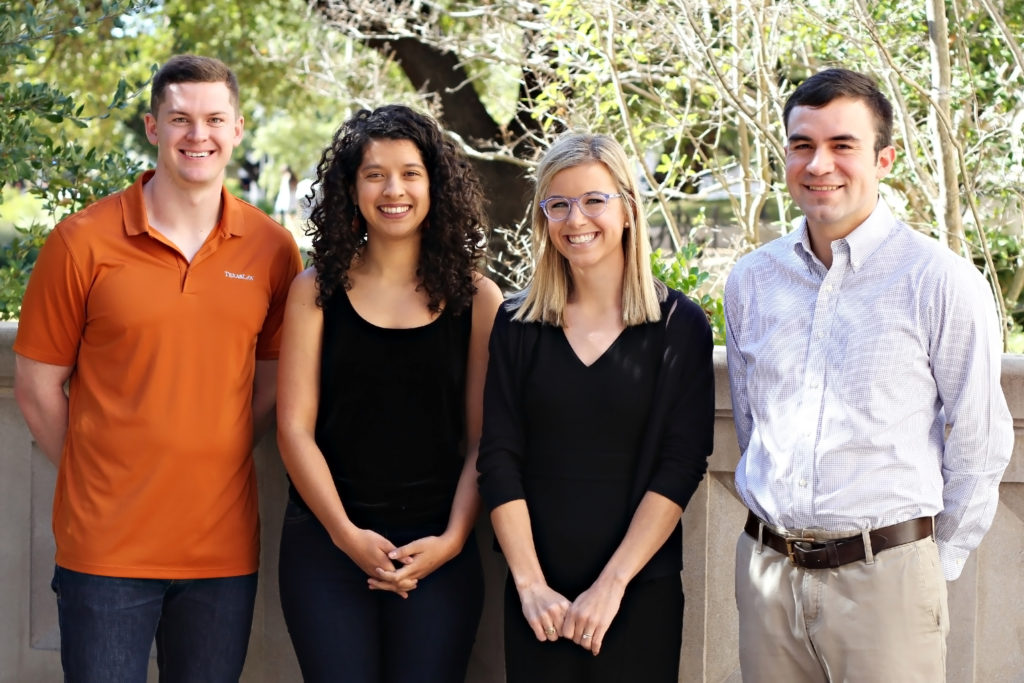 The Chris Marshall Endowed Presidential Scholarship is awarded annually to third-year students of outstanding academic excellence who plan to remain in Texas after graduation to practice public service law in nonprofit, government or legislative positions. Clyde Christopher Marshall ’77 was a Tarrant County assistant district attorney, chief of the Tarrant County district attorney’s appellate division, and a statewide leader in appellate law. Gift funds for the scholarship endowment were donated in honor of Mr. Marshall by family, friends, and colleagues. The Justice Center administers the scholarship.

Cody Akins is an articles editor of the Texas Law Review and has participated in the Supreme Court Clinic. As a 1L, he was a finalist in the Hutcheson Moot Court Competition. He interned with Judge Lee Yeakel of the U.S. District Court for the Western District of Texas in Austin and will clerk for Judge Diane Sykes of the U.S. Court of Appeals for the Seventh Circuit in Milwaukee, WI after graduation. Following the clerkship, he hopes to work in the Office of the Solicitor General in the Office of the Texas Attorney General.

Ashley Alcantara is an associate editor of the Texas Law Review, a Teaching Quizmaster, and an advanced student in the Civil Rights Clinic. During the school year, she interned with Disability Rights Texas and the Texas Association of Broadcasters. She spent her summers working for the ACLU of Texas in Houston and the Texas Civil Rights Project in Austin. Following graduation, she will clerk for Judge Robert Pitman of the U.S. District Court for the Western District of Texas in Austin, after which she hopes to work in civil rights impact litigation in Texas.

Enrique Ramirez-Martinez is an articles editor of the Texas Intellectual Property Law Journal and a submissions editor of the Texas Hispanic Journal of Law and Policy, serves as treasurer of the Chicano/Hispanic Law Students Association, and interned with Justice Eva Guzman of the Texas Supreme Court. He spent his summers working with the ACLU of Texas in Houston and the ACLU of Northern California in San Francisco. Following graduation, he hopes to work with a public interest organization that focuses on litigation and immigrant rights issues in Texas.

Allison Wright is an associate editor of the Texas Law Review and a Chancellor, one of the sixteen law students who achieve the highest grade point averages in their class through their second year. She has participated in the Children’s Rights Clinic, the Immigration Clinic, and the Transnational Worker Rights Clinic. In the summers, she worked on immigration matters with the Equal Justice Center and Casa Marianella, both in Austin. Following graduation, she will work on immigration and employment law issues at the Equal Justice Center’s Austin office as a Gallogly Family Foundation Public Interest Law Fellow.