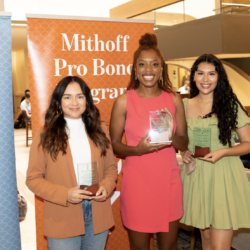 William Wayne Justice Center recognized 3Ls Alyssa Gordon, Jacqueline Morales, and Zoraima Pelaez with Graduating Student Awards for their outstanding leadership and contribution to the community. They were honored at the Justice Center and Mithoff Pro Bono Program’s annual Celebration of Service on April 21— which was held in-person for the first time since the […] 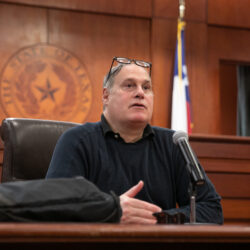 Texas Law’s William Wayne Justice Center for Public Interest Law hosted Lee Gelernt, Deputy Director of the ACLU Immigrants’ Rights Project, as a G. Rollie White Scholar in Residence. During the visit Feb. 22-23, Gelernt participated in several events, spoke to two classes, and met with students individually and in small groups. Gelernt has worked at the […] 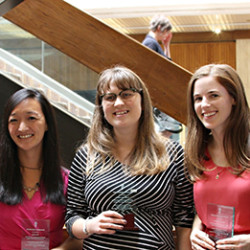 The University of Texas School of Law and the Division of Diversity and Community Engagement (DDCE) are proud to announce the creation of the Educational Equity Project (EEP). The project will address the significant issue of educational barriers for low-income and minority students across Austin. The project is an expansion of a two-year partnership between […]

Four students have been selected to serve as Public Service Scholars with the William Wayne Justice Center for Public Interest Law for the 2014-15 academic year. The University of Texas School of Law awards scholarships each year to a group of outstanding students who demonstrate a commitment to studying, promoting and working in public service. […]

“Change It Up!” Event Introduces Students to Lawyering for Social Change

More than 40 1Ls and transfer students gathered Friday, Sept. 5, for Texas Law’s second annual “Change It Up!,” a social justice orientation hosted by the William Wayne Justice Center for Public Interest Law, the Capital Punishment Center, the Rapoport Center for Human Rights and Justice, and 25 student groups. The orientation was designed to […]

The University of Texas School of Law has awarded its 10th Equal Justice Scholarship to Alexander Stamm. It also awarded the inaugural G. Rollie White Public Service Scholarship to Paige Duggins. Both scholarships are awarded to an incoming first-year student who has a demonstrated commitment to social justice. The students are selected through a competitive […]

Equal Justice Works, a Washington, D.C.-based nonprofit organization, awarded two-year fellowships to three recent graduates of The University of Texas School of Law. Gonzalo Serrano, ’14, Erin Gaines, ’13, and Megan Sheffield, ’13, were among nearly 60 fellows selected nationwide for the Equal Justice Works Fellowship Class of 2014. The organization is dedicated to creating […]