“One Degree. Many Paths.” These are the words inscribed on the entrance of the Texas Law Career Services Interview Suite. Though they were installed after John Schwartz ’84 graduated, he has lived their example. Armed with a Juris Doctor from Texas Law and a Bachelor of Arts from Plan II, Schwartz found his path as a highly esteemed journalist.

After nearly four decades as a newsman, his career journey has taken another turn— bringing him back to the Forty Acres as a professor. We are so pleased to welcome him back!

We reprint below, with permission, the Alcalde’s interview with Professor Schwartz. 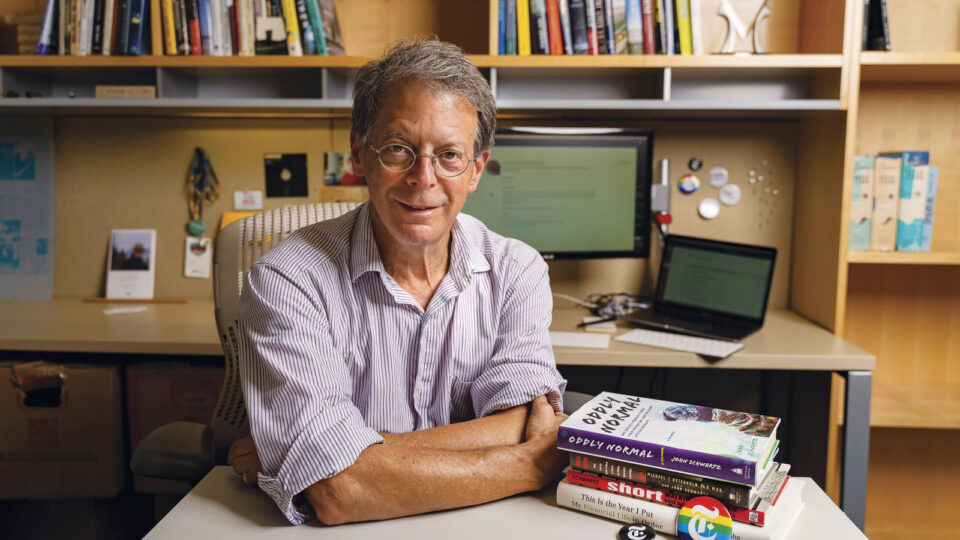 Earlier this year, John Schwartz, BA ’79, JD ’84, became one of the millions of Americans who left their jobs during the pandemic. After nearly four decades as a journalist, the Galveston-born Schwartz resigned as science writer at The New York Times—a prestigious role he held for 21 years— to teach at The University of Texas at Austin, where he received both his bachelor’s and law degrees (he completed the latter while also editing The Daily Texan).

During his first semester, Schwartz is teaching an upper-level environmental journalism class and the introductory level Reporting Words at the Moody School of Communication. He is also the newly minted associate director of UT’s Global Sustainability Leadership Institute, a joint initiative between Moody and the McCombs School of Business that focuses on “corporate sustainability, sustainable finance, impact innovation and infrastructure, and sustainability communications.”

What Schwartz humbly describes as “job changes” include reporting positions at Newsweek, The Washington Post, and a stint as the self-described “world’s oldest social media editor” for The New York Times’ Climate section. A few weeks before students returned to the Forty Acres to kick off the fall 2021 semester, the Alcalde spoke to the new professor about his storied career, his plans for the classroom, and returning to Austin 35 years later.

Tell me about the decision to leave The New York Times after 21 years.

I loved working at the Times and saw myself working there for years to come. It’s just the most amazing institution and the stories I got to write and the things I got to do amazed me. At the same time, I wasn’t getting to do those things … over the course of the pandemic. And so, like a lot of people, I was more open to change than I might have been.

How did you navigate making such a dramatic career move in your early 60s?

I’ve been telling stories for nearly 40 years if you count The Daily Texan. This would be uprooting my life, moving back to Texas, which sounds wonderful, but is a big, big, big change. So, I did what reporters do and I reported it out.

I called Leonard Downie Jr. who was my editor at The Washington Post and he was super kind and said, “How old are you, John?” and I said, “I’m 63 [though] I’m 64 now.” And he said, “Sixty-three is an excellent age to begin a new career.” And that was it.

You were appointed editor of The Daily Texan while you were at UT Law. Why did you become a journalist instead of a lawyer?

You say the law degree helped with your role at The Washington Post, where you covered the Food & Drug Administration for seven years and became a science writer for the first time. During the interview process you told your editor, ‘I’ll learn the science part.’ How did you do that?

Reporting. That’s what you do. From the first story. You go to the clips; you find the sources. When you’re climbing a learning curve, the best thing to do is to keep people on the phone longer. And make sure they understand how much you don’t know. It’s pretty common for reporters to impress people with how much you do know.

No one wants to profess ignorance, but it’s the only way to learn.

Switching gears, it sounds like the Global Sustainability Leadership Institute was a big part of why you wanted to come to UT. Why is that?

I was really drawn to the idea that this university is making a commitment to a sustainability institute. Think about me leaving in 1985, I could never imagine those principles supported in this big way.

Speaking of 1985, it’s been 35 years since you’ve lived in Austin. What is it like coming back now to such a rapidly growing city?

My landmarks are gone. The Tower and the Capitol … aren’t the only tall buildings. There are a few things that are still there. [But] I’m grateful I can still eat at Dirty’s. I can still eat at El Patio. I love what’s still here.