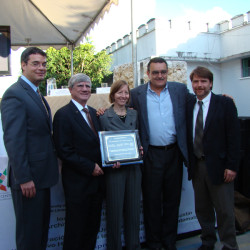 On December 9, 2011, the University of Texas and the Historical Archive of the National Police of Guatemala (AHPN, for its Spanish title, Archivo Histórico de la Policía Nacional) announced in Guatemala City, Guatemala, the joint collaboration that has made the Archive globally accessible via the Internet.

Granito: How to Nail a Dictator to screen December 1, 2011

Granito: How to Nail a Dictator, an award-winning documentary film that chronicles Guatemala’s internal armed conflict, and subsequent efforts to bring the perpetrators of massive human rights violations during that period to justice, will screen at the School of Law at 5:00 p.m. on December 1, 2011.