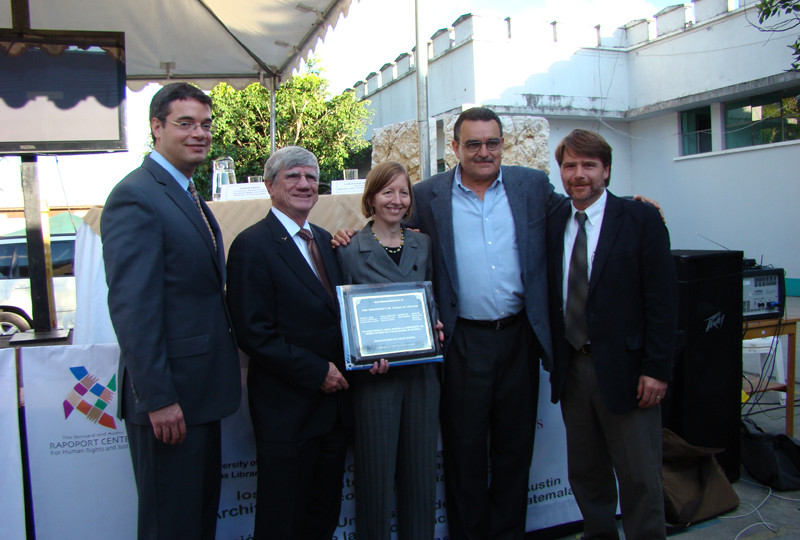 On December 9, 2011, the University of Texas and the Historical Archive of the National Police of Guatemala (AHPN, for its Spanish title, Archivo Histórico de la Policía Nacional) announced in Guatemala City, Guatemala, the joint collaboration that has made the Archive globally accessible via the Internet. Representatives of the University of Texas Libraries (Vice Provost Fred Heath and Nettie Lee Benson Chief Archivist Christian Kelleher) and codirectors of the Bernard and Audre Rapoport Center for Human Rights and Justice (Government Professor Daniel Brinks and Law Professor Karen Engle, who are also affiliated faculty members of the Teresa Lozano Long Institute of Latin American Studies) shared a stage with Anna Carla Ericastilla, director of the General Archive of Central America, and Gustavo Meoño, coordinator of the AHPN. They spoke on the AHPN grounds to an audience of about two-hundred people, including several ambassadors and representatives of foreign governments, Guatemalan government officials, and most of the AHPN staff.

The event began with presentations by AHPN staff member Elena Mijangos and Graciela Ramírez Monasterio, sister of Fray Augusto Ramírez Monasterio, a priest who was assassinated in 1983. Ms. Ramírez Monasterio spoke of the assistance the AHPN has provided to her family in its attempts to learn the truth of what happened to her brother. AHPN and UT panelists then gave a live demonstration of the digital archive and website, explaining how to use it, and spoke about the importance of this historic move to make some twelve million pages of documents from the Archive universally available through the Web.  Gustavo Meoño presented the UT representatives with a plaque, thanking the four UT institutions—the Rapoport Center for Human Rights and Justice, the Lozano Long Institute for Latin American Studies, the Benson Latin American Collection, and the UT Libraries—for their assistance in opening up the AHPN’s digital collection to the world.

All of the UT speakers emphasized that the University’s role in the project was only possible because of the tremendous and professional work that has been done over the past six years by the Archive’s dedicated staff. For that reason, when Christian Kelleher officially launched the website during his presentation, he called upon Jorge Villagrán, information technology manager of the AHPN, to participate in the occasion. In her remarks, Karen Engle noted how, when UT and the AHPN first entered into discussion four years ago, the possibility of making the Archive accessible via the Internet was inconceivable given that the physical Archive was not even public at the time. Much has since happened in Guatemala, she emphasized, from the passage of a freedom of information law to the attorney general’s commitment to and progress in prosecuting human rights violations.  Daniel Brinks spoke of how efforts like this collaboration, to make information ever more broadly accessible, build on and contribute to this process of deepening democracy and understanding the past.

The event in Guatemala took place one week after the launch of the digital archive and website at the “Politics of Memory” conference in Austin, in which Meoño and Ericastilla participated. UT participants pointed to the high volume of traffic the site has already received. In its first five days, they noted, the site had received nearly 1,500 visits from forty-seven different countries, with over 18,000 pageviews. Thirty percent of the visits were from within Guatemala. Since then, those numbers have only increased: as of December 14th, the site had received nearly three thousand visits from fifty-eight countries, with over 52,000 pageviews. About 45 percent of all visits have come from within Guatemala.