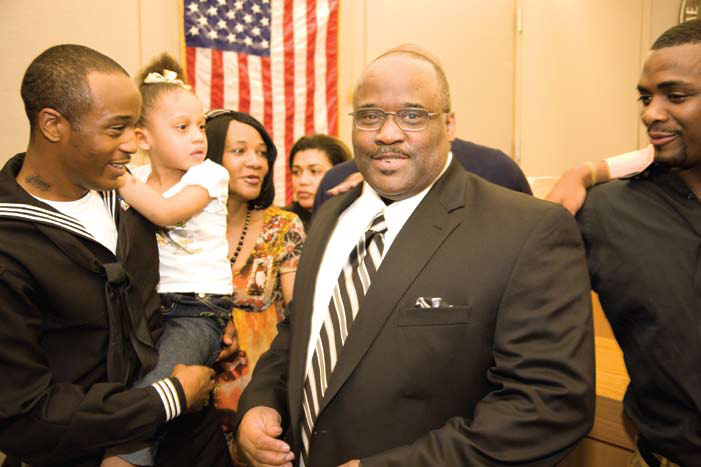 Claude Simmons Jr. and Christopher Scott spent twelve years in prison for a murder they did not commit. They insisted that they were innocent from their 1997 trial and conviction through their years in prison, claiming that the eyewitness who picked them out of a lineup and indentified them at their trials—the victim’s wife—was mistaken.

On October 23, 2009, thanks in part to the work of the University of Texas School of Law’s Actual Innocence Clinic, the state formally acknowledged that the men had been right all along, and set them free. On that day, as the judge read their writs of habeas corpus, friends, family, and loved ones stood in the Dallas County District Court and waited for their opportunity to hug Simmons and Scott for the first time in twelve years. One of Simmons’s sons, now in the U.S. Navy, had flown into Dallas the night before to surprise his father. After State District Judge Robert Burns released them on personal bonds, apologized to the men for the mistakes of the past, and encouraged them in their free lives, Simmons and Scott joined the impromptu courtroom family reunion before addressing the press.

The freeing of Simmons and Scott was the culmination of a long effort on the part of student groups, the Dallas County District Attorney’s Office, the Dallas Police Department, and Simmons and Scott themselves, to make sure the state no longer imprisoned innocent people. It was a remarkable victory. Students in the Law School’s Actual Innocence Clinic review the case files of Texas convicts looking for anything that might suggest that a search for new evidence might bear fruit and lead to the exoneration of a wrongly convicted person. The work is painstaking, detail-oriented, and often frustrating. The Law School students know that their work interviewing witnesses, researching cases, reviewing trial transcripts, and visiting inmates in prison will turn up only a very few cases—out of hundreds of letters claiming innocence from Texas inmates the Clinic receives every year—that have a chance of going forward and exonerating a wrongly convicted person. The legal barriers are difficult to overcome: convicted people must provide new evidence—often coming in the form of DNA analysis—to the court, not evidence that could have reasonably been discovered at the time of their trials.

Simmons’s and Scott’s exoneration came about in part due to a collaboration between UT Law’s Actual Innocence Clinic and the University of Texas at Arlington’s Innocence Network. The Actual Innocence Clinic investigated Simmons’s case and was able to interview another inmate who eventually confessed to having committed the crime with another man during an attempted robbery in Dallas in 1997. Alonzo Hardy provided a videotaped statement in which he confessed his involvement in the crime to the Dallas DA’s office last summer. Hardy was in prison with
another man who had known Simmons’s sister from their Dallas neighborhood. That man worked with Hardy on an affidavit detailing Hardy’s involvement in the crime, which he eventually sent to Simmons’s sister, who forwarded it to the Clinic. His alleged accomplice, Don Michael Anderson, was arrested near Houston and charged with capital murder.

For Tiffany Dowling, ’04, the clinical instructor for the Actual Innocence Clinic, the exoneration was both a milestone—it was the Clinic’s first—and provided a goal for current and future students to aspire to. “This was the first exoneration since the Actual Innocence Clinic has been up and running,” Dowling said. “And it was very exciting that Claude Simmons and Christopher Scott get to go home and be with their families and get a portion, at least, of their life back. But it was exciting for us because for a lot of years we have been looking at these cases and the volume of cases we look at sometimes is frustrating, that we don’t always feel like we’re making headway.”
Dowling was herself a student attorney for the Actual Innocence Clinic while a law student. She began teaching at the Law School in 2007.

UT Law students Ashley Burns, ’09, and Dana Scott, ’09, went to Hardy’s prison in Lovelady, a half-hour north of Huntsville, and were able to hear him confess to the crime. Burns, who will begin workingwith Andrews Kurth in January, said the experience opened her eyes to the nature of the judicial system and the ways committed lawyers can improve it. “Before law school I would have told you that the justice system works pretty flawlessly,” she said. “I also had the prejudice that many other people have—that those who are found guilty are always guilty. Boy, was I
wrong. While most of the time our system works well, it is very fortunate that these cases are further investigated.”

Patrick Lingwall, a second year Law School student from Dallas now participating in the Actual Innocence Clinic, said the exoneration, which he and fellow Clinic student Rob Harris attended, was “exciting and encouraging to see. An exoneration is such a rare occurrence. It’s not going to sink in for a while.” Harris, a third-year student, said the exoneration made him realize how important the Clinic’s work is. “I feel pride to be connected with the exoneration even remotely,” he said. “You feel honored the Law School was part of it and brave enough to create the Clinic in the first place.”

The Clinic, and the Texas Center for Actual Innocence, a nonprofit corporation not formally associated with the Law School, were founded in 2003 by former Law School Professor Bob Dawson, who died in 2005. The Clinic is one of four projects of the TCAI. The members of the Center’s board of directors and Dowling teach the Clinic. This fall they were joined by four UT journalism students and two UT journalism faculty—including Bob Dawson’s daughter, Kate
Dawson, and Bill Minutaglio—in a collaborative educational experience. Dowling and Sheppard led the Actual Innocence Clinic’s investigative team for Simmons’s exoneration case. Dowling is in charge of the day-to-day clinic operations. Sheppard is a long-time member of the faculty and a founding member of the TCAI and the Clinic. Clinic law students bridging several semesters also worked on the case.

The exoneration of Simmons and Scott was unusual in that it turned on a new confession rather than DNA evidence. During their research of the case, students noticed that the wife of murder victim Alfonso Aguilar had identified Scott as a shooter when she saw him in a police station, but was later unable to pick him out of a photo lineup. This raised questions about her identification of Scott from the witness stand. Meanwhile, Simmons claimed that Hardy had told him he would confess to killing Aguilar, and that he had not done so before for fear of his accomplice harming his mother, who recently passed away.

According to the Innocence Project of Texas, a nonprofit organization dedicated to overturning wrongful convictions in the state, Texas has more verified wrongful convictions than any other state. Thirty-eight people have been exonerated since 1994 through the use of DNA testing. Dallas County in particular has seen a very high exoneration rate due to a convergence of factors: a historically aggressive district attorney’s office, the policy of routine DNA collection and retention begun in the 1980s, and current District Attorney Craig Watkins’s establishment of a Conviction Integrity Unit to investigate possible wrongful convictions. Watkins’s office in fact worked with the Clinic on the Simmons case.

“This was the first case that we had really worked fully with the Dallas DA’s office,” Dowling said. “The experience was invaluable. Now we know where to start, and who to talk to at the Dallas DA’s Office, and what kind of information they are going to want. When students present cases, we grill them about all the details of the case, why things happen or where information can be found, because those are the questions that the DA’s office is going to ask us and if they can’t answer it, we can’t answer it when the DA asks us so there’s no point in taking a case to them, until you can answer those questions. I n our clinic we always go to the DA’s office and say, ‘Here’s the case we have. We’d like your assistance with it.’ We show them the information we have and sort of lay it out for them and that has been a successful strategy, as evidenced by Claude Simmons.”

Dowling said the experience of working on and seeing through an actual exoneration would encourage her and her colleagues and students, but that more importantly, it showcased how important the work they do every day is in righting wrongs that can devastate people’s lives. “I’ve been here two years and often times when I tell people what I do for a living, they ask me how any people I have exonerated,” Dowling said. “It was always disheartening to say none. That so minimizes Claude Simmons’s experiences. I don’t think it encapsulates what he and Scott went through or the importance of this to their lives. It was exciting for the students, of course, but now they all see that under the sea of paperwork we are looking at there is a human being that really may be innocent and may not deserve to be where they are. It helps them work hard on the cases assigned to them and refuse to be deterred.”

Burns agreed that the exoneration had both justified the students’ hard work and given future students reason to continue. “I know that several skeptical students who were not in the Clinic told me that no one had been exonerated through the clinic,” she said. “While I joined anyway, and hoped to work hard, this type of thing really did make it harder for me to stay upbeat sometimes, especially when many of the cases that I worked on and investigated turned out to be pretty hard to prove. The cases that really were hard were the ones that gave me a gut call that the inmate could be innocent, but that he or she could not give me enough evidence to prove it. I had to keep reading and re-reading trial transcripts and looking through exhibits, hoping to find any new evidence. It was hard. But I am certain that new students in the clinic will have more hope now.”—Laura Castro, ’97, and Julien N. Devereux