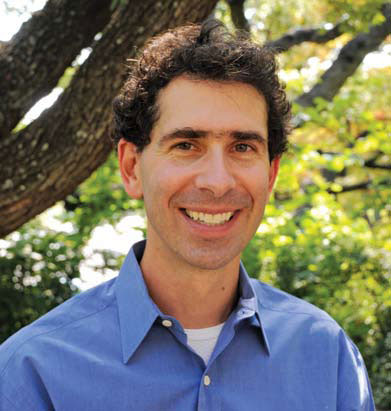 David Adelman uses his extensive scientific training and expertise to clarify and inform our understanding of the complex environmental, regulatory, and intellectual property-related legal issues of our increasingly technology dependent world. Adelman holds the Harry Reasoner Regents Chair in Law, and is part of the Law School’s new Center for Global Energy, International Arbitration, and Environmental Law. He comes to UT Law from the Rogers College of Law at the University of Arizona, where he was an associate professor of law and the director of Law, Science & Technology Initiatives. His research focuses on the interfaces between law and science, with particular emphasis on evaluating environmental and regulatory issues relating to new technologies and assessing the impacts of intellectual property regimes on scientific research. In addition to a JD, he also holds a PhD in chemical physics, both from Stanford University. He is teaching an environmental law survey course in the fall and will teach Green Technology Law and Policy in spring 2010.

Adelman said his scientific training led him to become interested in the policy debate over issues such as global climate change, and ultimately to law school in order to bring a scientifically informed voice to the policy debates. After law school, Adelman clerked for the Honorable Samuel Conti at the United States District Court in San Francisco, and then practiced intellectual property litigation and environmental regulatory compliance law at Covington & Burling in Washington, D.C. In 1998, he took a position as senior attorney in the Nuclear and Public Health programs at the Natural Resources Defense Council. During his time there he was appointed to the Department
of Energy’s Environmental Management Advisory Board and two National Academy of Sciences committees.

“At the NRDC I worked on issues related to the $6 billion-a-year clean-up of U.S. nuclear weapons sites,” he said. “I also did some public-health work related to genetically engineered plants. These experiences made me become interested in how science is used—and misused—in the regulatory process. Since I’ve been in academia, I’ve been studying and writing about legislation that marries innovation policy and traditional regulation.”

As an example of such legislation, Adelman refers to HR 2454, the American Clean Energy and Security Act of 2009, which was passed by the House of Representatives in July. “The bill contains a mixture of traditional regulatory approaches along with subsidies and incentives associated with innovation policy,” Adelman said. “Much interesting work is being done in combining traditional regulation with various incentive schemes, because when they’re combined you get a bigger bang for your buck. This is very important when it comes to things like climate change legislation, because it’s a problem that affects every sector of our economy and legislation is going to have to influence behavior across the economy.”

Adelman has published multiple articles on environmental law and policy, including articles on climate change, “The Challenge of Abrupt Climate Change for U.S. Environmental Regulation,” 58 Emory Law Journal 379 (2008) and “Reorienting State Climate Change Policies,” 50 Arizona Law Review 835 (2008), and environmental federalism, “Adaptive Federalism: The Case Against Reallocating Environmental Regulatory Authority,” 92 Minnesota Law Review 1797 (2008). He also writes in the area of intellectual property law and innovation policy, “Patent Metrics: The Mismeasure of Innovation in the Biotech Patent Debate,” 85 Texas Law Review 1677 (2007) (coauthored with Kathryn L. DeAngelis). Adelman said he sees many opportunities for research on policies that combine regulation and incentives to address environmental concerns such as global climate change; in regulation of innovative pharmaceuticals such as protein therapeutics; and
development of new forms of energy generation, such as the use of algae in the production of biofuels.

“Texas is unique in the energy world,” he said. “It’s possible to engage with the energy industry here in a way that it’s not elsewhere. Companies here are well-known for their strength in oil-related energy production, but there are efforts to develop a portfolio of energy sources and methods for energy delivery.”

Indeed, ExxonMobil recently announced a $600 million investment into producing liquid transportation fuels from algae, and if it is successful, it will have multiple and profound consequences for energy policy in Texas and beyond. Adelman said he is also taking part in the multidisciplinary Pecan Street Project, which brings University of Texas faculty and students from the engineering, business, architecture, and law schools together to study “smart grids;” as well as the new University-wide Energy Institute, an interdisciplinary project that will study support interdisciplinary research on low-carbon and renewable sources of power, the economic and business dimensions of energy production, and the legal and policy instruments needed to dramatically reduce greenhouse-gas emissions responsible for global warming. “There’s really cutting-edge work being done here,” Adelman said. “And that sort of collaborative work is what I came here for.”