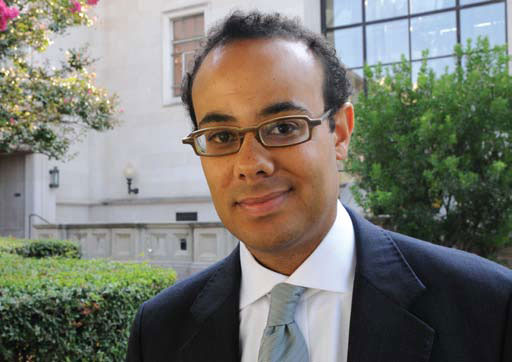 Justin Dri ver’s teaching and scholarly interests lie at the intersection of constitutional law and race within legal institutions, with specialization in the doctrinal development of the Reconstruction Amendments. He is particularl  interested in how the U.S. Supreme Court’s interpretation of the Constitution has “both stimulated and stymied” racial progress in the United States. He spent the last two years as an associate in the appellate division of Sidley Austin LLP in Washington, D.C.

“In my current research I’m examining the concept of racial ‘tokenism,’” Driver said. “That word has often been used by law professors and advocates to describe, among other things, a measure that offers merely a symbolic gesture toward racial equality. There is no doubt that the word has been effective, as even the Supreme Court has repeatedly invoked the concept in its cases involving race. Because many people mean many different things when they use the word “tokenism,” however, I hope to bring some analytical clarity to the concept and, in the process, assess when the charge of tokenism is warranted and when it is not. Part of that effort will entail explaining, precisely, how the mechanisms of tokenism work. Finally, I intend to contemplate whether tokenism might, in certain limited circumstances, actually help to produce racial progress rather than prevent that progress—as is generally assumed.”

Driver’s latest research effort is titled “Rethinking the Interest-Convergence Thesis,” a critique of “interest convergence” theory, developed by New York University School of Law Professor Derrick Bell, which says, in short, that legal progress for African Americans and other minorities comes about only when the interests of the dominant white culture “converge” with theirs. Bell claimed, for example, that the Supreme Court’s 1954 Brown v. Board of Education decision desegregating the nation’s schools came about because the U.S. Government had an interest in projecting a more tolerant image to the rest of the world in order to win over third world countries to its side in the cold war. “But interest-convergence theory provides too little agency to black actors in this country, and also, it’s irrefutable,” Driver said. “You can’t prove it wrong or right. It’s been an incredibly influential idea over time, and it’s an important one, but it doesn’t hold up to scrutiny.”

Driver’s previous publications include: “Rules, The New Standards: Partisan Gerrymandering and Judicial Manageability After Vieth v. Jubelirer,” 73 George Washington Law Review 1166 (2005), which contends that the Court’s approach transformed the political question doctrine’s requirement for judicially manageable standards into a requirement for judicially manageable rules; and “Underenfranchisement: Black Voters and the Presidential Nomination Process,” 117 Harvard Law Review 2318 (2004), his student note, which explores New Hampshire and Iowa’s first-in-the-nation status in the presidential nomination process through the lens of the Court’s vote dilution jurisprudence. He has often contributed to the New Republic, where he served as assistant literary editor before attending law school.

This fall, Driver is teaching a class, The Reconstruction Amendments, about the three Constitutional amendments adopted during the five years after the end of the Civil War. “The course invites students to contemplate the Thirteenth, Fourteenth, and Fifteenth Amendments to the Constitution as a collective effort to assist black people in gaining the rights of full citizenship,” Driver said. “Rather than limiting our exploration of the Amendments exclusively to the latter half of the nineteenth century, the class instead focuses both upon the often surprising interpretive choices that the Supreme Court has made over time and upon the way in which those choices continue to shape the modern constitutional era.” Driver will teach a seminar on law and race in spring 2010.

Driver said he hoped his experience at Sidley Austin would help him relate his research and scholarship to the sort of non-academic work many of his students will be doing after graduation. “I worked in Sidley Austin’s appellate division with a really talented group of lawyers,” Driver said. “It’s valuable to have some experience of what the overwhelming majority of my students are going to do after they leave UT Law.” Driver holds master’s degrees in teaching, from Duke University, and in modern history, from Magdalen College, Oxford University, in addition to his JD, from Harvard Law School, where he served as an editor of the Harvard Law Review. He said he was happy to have joined the Law School’s renowned faculty, some of whose work he studied as a law student.

“UT Law’s faculty is well known for being extremely intellectually engaged and extremely collegial,” Driver said. “I have also found the Law School’s students to be thoughtful and genuinely excited about tackling difficult legal questions.”