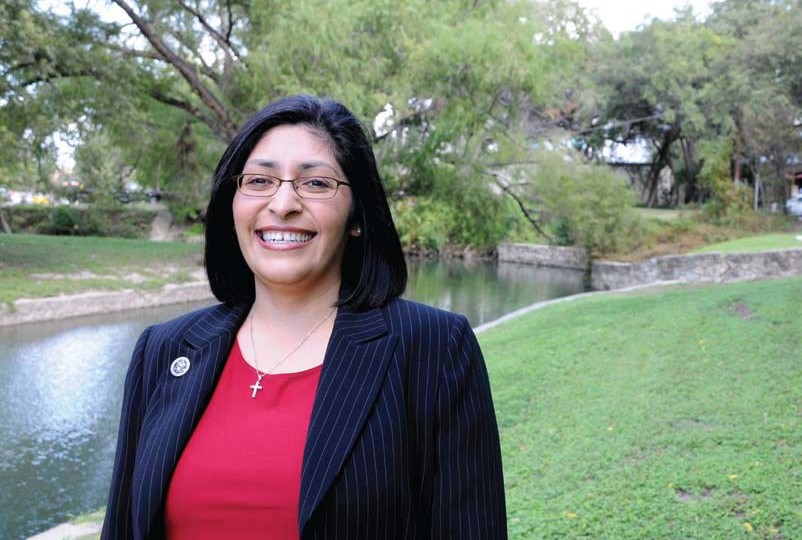 A Dream Made Real

U.S. Magistrate Judge Diana Saldaña, ’97, first envisioned a legal career while traveling the country with her family as a migrant worker.

Throughout her childhood, Diana Saldaña traveled north each summer with her mother and siblings, driving from their home in Carrizo Springs to Minnesota and North Dakota. These were not idyllic family vacations filled with sightseeing and campouts. Instead, beginning at the age of ten, Saldaña toiled as a migrant farmworker, enduring the backbreaking task of thinning and weeding sugar beets and soybeans and picking potatoes.

“It’s hard going to other states to pick crops,” Saldaña said. “People look down on you.” Imagining life beyond the fields sustained her. “Though I’d never been to the campus of UT and I didn’t know anyone who went there, I dreamt of going there one day.”

Saldaña’s mother, who was not able to attend school past the third grade but instead worked alongside her family as a farmworker, encouraged her daughter’s dreams. “She said, ‘These dreams are going to drive you,’” Saldaña recalled.

Her older sister got into the university first, and Saldaña went along to help her move into Littlefield Dormitory. Seeing the campus was a pivotal moment. “It put pictures to my dreams. I was seventeen and thinking, ‘Oh wow, this is what it’s going to be like.’”

Following in her sister’s footsteps, she started at UT the next year. Those years, the siblings still worked the fields in summer, leaving before harvest was finished to drive back to Texas in time for the start of classes.

Saldaña’s dreams were slightly waylaid when she did not initially get into the Law School. After finishing her first year of law school elsewhere, though, she was able to transfer in. This is when she met John V. Treviño Jr., ’97, now an attorney with American Airlines. The two became fast friends.

Treviño recalled being impressed that Saldaña was “one of only three accepted to transfer. That in itself tells you she was determined to get there and how she’s able to set a goal and work toward that goal.”

Saldaña said she was thrilled to be back at the University of Texas. “I can honestly say that for me law school was really exciting, challenging, and rewarding,” she said. “Many people go to law school and are completely horrified and live in this terror they’re going to get called on. But I was ready to be challenged. I studied all the time. It was a really positive experience for me. I met some amazing people and I had some amazing professors.”

While at the Law School, Saldaña was also president of the Chicano/Hispanic Law Students Association (CHLSA), succeeding Geronimo Rodriguez, ’96, who now serves as vice president for diversity and community outreach at the Seton Family of Hospitals in Austin. “Among all of our friends at law school, Diana was viewed as the most likely to become federal judge by age of thirty-five,” he said.

Though that prediction did not come to pass exactly, it was not far off the mark. Saldaña made a quick ascent, reaching the position of magistrate judge for the United States District Court, Southern District of Texas, in 2006, when she was just 34. Her trajectory had been impressive. Upon graduating in 1997, she worked as a judicial law clerk to the Honorable George P. Kazen, ’61, a U.S. District Court judge in Laredo. She then served in Washington, D.C., as a trial attorney for the U.S. Department of Justice before moving on to a work as a civil litigation practitioner with a firm in Houston. After that, she served as a prosecutor, returning to the court in Laredo where she had clerked. In these positions she built upon the solid foundation laid during her days at the Law School.

“The analytical skills I learned in the classroom—the way to process information, to be able to get the one rule of law out of several cases and be able to apply it to the facts—these have served me throughout my career,” she said.

Being appointed judge took her into another classroom of sorts, a place colloquially known as “Baby Judges School.” Here, new judges spend a week receiving an overview of their responsibilities. Saldaña was, relatively speaking, more of a “baby” judge than her peers. The reaction she received when she walked in the room was unspoken but palpable.

“I was the youngest in my class—when I walked into the room, I knew what they were thinking,” she said. “It didn’t bother me, but it was definitely something that I could not not recognize—that I was a woman, Hispanic, and young.”

Saldaña did not waste time worrying if she was up to this new task, which again found her working for Kazen. “I was very confident that I could do the job,” she said. “I had been practicing in this court in Laredo as a prosecutor for five years. I knew the job very well and what was expected of me. And I had already worked for Judge Kazen. A lot of magistrates don’t have that relationship with the judge they work for. I consider him my mentor and close personal friend.”

Kazen said he was pleased with her appointment. “I first hired her as a law clerk many years ago,” he said. “I was very impressed with her background, especially the poverty and what she came from. Coming from that background and getting through law school was a tremendous accomplishment that merited taking a chance on her. She fulfilled all of my expectations. She’s a first rate judge—efficient, honest, fair, and smart. She’s well regarded and extremely compassionate. And she does outreach work with a lot of kids with backgrounds like hers—very poor, not certain where they’re going, needing role models.”

The job is not easy—the hours are long and the cases emotionally draining. “We have a variety of cases that come before us,” Saldaña said. “A lot of drug violations, immigration violations, and gun cases because of the violence in Mexico. My role is to make sure the accused understand their rights, that we are protecting their rights, that they have an attorney. If they decide they want to plead guilty I need to make sure the facts put on the record support their plea. I listen to the facts. I detach myself as far as judging them—some people do really horrific things but it’s not my role, as a magistrate judge, to have an opinion on it because I will not be the sentencing judge.”

She also strives to always remember the ripple effect of her work. “People’s lives are changed when they enter my courtroom— not just the person in front of me but their entire family,” she said. “I take this very seriously. I am here to serve and to make sure we are respectful and recognize that. Regardless of the volume we cannot forget that.”

This sense of duty was unforgettably underscored for her when she heard Kazen give a speech that included a quote by Sir Rabindranath Tagore:

I slept and dreamt that life was all joy, I awoke and understood life was but service, I served and realized service is joy.

“I have that right here, right in front of me on my desk,” she said. “Even before he read that quote, I felt that way. That’s pretty much what my mantra is.” —Spike Gillespie