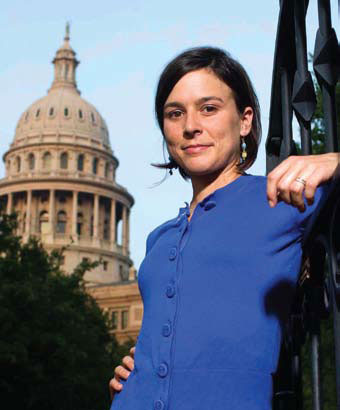 A Potential for Transformation

A rare glimpse inside maximum-security prisons in 2008 led Hannah Miller, ’09, to groundbreaking work in policy reform at the Texas capitol.

“What I witnessed that day changed my life,” the twenty-nine- year-old student said. “The cells were smaller than I ever imagined. Bodies cramped, eyes bloodshot and desperate,” she recalled, noting the disorienting absence of natural light in windowless solitary confinement.

“Men were literally in cages,” she said. “Twenty-three hours a day under fluorescent lighting, rocked to sleep by violent screaming from cell to cell.” These conditions only aggravated inmates’ mental problems, Miller said. “It was hellish—just absolutely dehumanizing.”

“You can’t address these complex problems through legal representation alone,” said Miller, who saw inside the prisons when she studied last year with attorney Michele Deitch, a criminal-justice expert at the Law School and UT’s LBJ School of Public Affairs. “In many cases, policy reform may be the more effective mechanism.”

Deitch said Miller, who graduated in May 2009, did “absolutely groundbreaking work” in Deitch’s Texas Juvenile Justice System service learning course. As a policy intern with the Travis County Juvenile Court, Miller has had “an enormous impact right now on the direction of juvenile-justice reform,” Deitch said.

Travis County may receive as much as $17 million for a pilot project Miller helped design, and the proposal is already reshaping views of the future of juvenile justice. A response to the 2007 sexual-abuse scandal in the Texas Youth Commission, this project would fund counties to house and treat juvenile offenders in their local communities rather than send them to distant state institutions.

“Travis County and all of Texas will be better off because of her efforts,” said Travis County District Judge W. Jeanne Meurer, Miller’s supervisor. “Hannah condensed complex ideas for reforming Texas’s juvenile-justice system into communications that seized the attention of the state’s policymakers. She’s triggered a potential paradigm shift in the way Texas deals with youthful offenders.”

Miller says working on the proposal has inspired her to see the potential for change even amid tragedy, such as the sexual abuse scandal that led to her efforts.

“Working with juvenile-probation departments across the state, it has been amazing to witness their newfound enthusiasm for treating youth in the local community,” Miller said. “The counties have started to embrace the belief that juvenile offenders, even those who have committed some of the worst crimes, have the potential to be of value in their communities. They no longer seem resigned to view these kids as criminals on their way to adult prison.”

“This project has the potential to redirect juvenile justice in Texas,” she said. “If the programs funded this session succeed, then the 2011 Legislature could embrace this concept statewide.”

A Florida native, Miller came to the Law School after having attended Harvard Divinity School for a year and working in hospice care. Her time at the Law School, she said, has given her rich and varied experiences. She worked to improve conditions at the Hutto immigration facility; represented condemned prisoners in the Capital Punishment Clinic; published academic research on the issue of mental illness on death row in the Texas Law Review; attended arguments at the U.S. Supreme Court in a case she worked on with the Supreme Court Clinic; and worked in the legislative arena. After graduation, Miller plans to clerk for a federal appellate judge in Macon, Georgia.

In the summer of 2008, Miller was part of the legal team that secured an eleventh-hour commutation for an inmate sentenced to death in Georgia—a rarity in that state’s history. She said she found a glimmer of hope in the state’s recognition of her client’s value.

“I believe,” she said, “that everyone has basic worth as a human being and the potential for transformation.”—Laura Castro, ’97