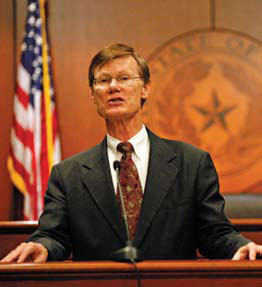 The Capital Punishment Clinic enters its third decade of providing representation to indigent men and women facing the death penalty in Texas.

For better or worse, Texas offers students of capital punishment an unparalleled opportunity to learn about the process of appealing death penalty cases. Texas is known around the country and the world—some would say notoriously so—for its high number of death penalty convictions and executions. Faculty, staff, and students participating in the Law School’s Capital Punishment Clinic (CPC) have been carrying out the legal work required to appeal the death sentences of Texas inmates since 1988. Since its founding, nearly 450 Law School students have passed through the CPC, and it has won many U.S. Supreme Court cases. Stephen Bright of the Southern Center for Human Rights in Atlanta, Georgia, and the Honorable Patrick Higginbotham of the U.S. Court of Appeals for the Fifth Circuit spoke passionately at the symposium about the problems with the capital punishment system in Texas and elsewhere.

The Clinic celebrated its twentieth anniversary of, in Dean Larry Sager’s words, “providing moral skepticism” of capital punishment on November 13, 2008, with a symposium examining the progress made and challenges still faced after twenty years of helping death-row inmates appeal their convictions and sentences. In addition, Death Penalty Stories, edited by Jordan Steiker, CPC codirector and holder of the Judge Robert M. Parker Endowed Chair in Law, and John H. Blume of the Cornell Death Penalty Project, was published in 2009. The speakers and participants in the symposium agreed that though much progress has been made since the CPC began, there is still much to do.

Since 1988, Texas has sentenced 647 inmates to death, and 397 have been executed. More than one-third of the executions in the United States take place in Texas. The death penalty remains popular with many in Texas, but there have been real changes in both public attitudes and legal proceedings regarding the death penalty. The faculty who teach the Capital Punishment Clinic have had a front-row seat to watch the changes unfold.

The CPC differs from many other clinics at the Law School in that participating students carry out work on behalf of the attorneys representing death-sentenced clients in the appeals courts. That is, the students do not directly represent clients themselves, but instead do interviews and research to be used in the appeal, which provides an opportunity to produce new evidence.

“Our students do a lot of factfinding: interviewing, researching, tracking down witnesses,” said Rob Owen, codirector of the Capital Punishment Clinic. “It’s sort of like retrying the case.” Owen said this sort of intensive detective work provides excellent training in getting to know the law inside-out. “It’s almost like being a legal pathologist,” he said. “You cut the body of the trial open and see what went wrong. The stakes are just as high, too. A life is hanging in the balance.”

Whether or not one supports capital punishment as a state policy, this work is vital to ensuring that the state applies the punishment as fairly as possible. During the CPC’s beginning years, Owen said, there was an explosion of capital convictions in Texas and other death penalty states—likely fueled by shock and dismay at the spectacular violence accompanying the crack cocaine trade and a public increasingly willing to support harsher punishments in order to stop it. Texas saw a huge increase in death sentences in the eighties and early nineties. But with prosecutors increasingly inclined to seek the death penalty and juries and judges increasingly willing to impose it, the possibility that wrongly convicted people might be sentenced to the state’s ultimate sanction increased. Rather than focusing solely on questions of guilt and innocence like the Actual Innocence Clinic, however, the CPC attempts to make sure that those who have been sentenced to death received a fair trial and continue to receive high-quality representation in their appeals.

Owen said that in the Clinic’s early years, the work was often more frantic due to the speed with which Texas moved from conviction to execution. “Until about 1995, Texas death penalty litigation was characterized by frequent and punitive execution dates,” Owen said. “Most of our efforts went into getting stays of execution, which was probably unhealthy for our students—though they came out of the process with a healthy sense of how arbitrary the system is.” Steiker agreed. “Twenty years ago there was no orderly procedure for moving cases through the system,” Steiker said. “And there was no guarantee of counsel in state habeas cases. Cases moved at varying speeds based on idiosyncratic factors, and it wasn’t unusual for an unrepresented inmate to get to the brink of execution.”

But due to a number of factors— including the option for juries to sentence convicts to life sentence without parole; the use of DNA evidence to exonerate death-row inmates; media scrutiny of capital punishment cases; and the work of organizations like the CPC—many of these conditions have changed in the past ten years. “We are seeing fewer and fewer executions and death sentences in Texas,” Owen said. “In 1999, there were thirty-five to forty new capital punishment convictions statewide each year. It’s dropped by two-thirds since then. This is partly because of the availability of life without parole sentences and perhaps partly because the public has become more aware of convicted inmates being found innocent.”

The CPC’s work in making capital punishment fairer in Texas is important, but its work training new lawyers and exposing them to the ways in which the state’s criminal justice system works—and doesn’t work—is just as important. Owen said the CPC has three main roles: to transform the practice of death penalty representation in Texas to bring it more in line with national practice; to transform the legal landscape in Texas by pushing the law in the direction of greater fairness; and to transform the lives of Law School students through representing death-row inmates. Indeed for many Law School students who participated in the CPC, doing the hard research and foot work involved in representing death-row inmates has been transformative. At the CPC ’s twentieth-anniversary symposium, several clinic alumni attested to the strong influence such work has had on them. “Learning about the details of these people’s lives and how the state did nothing to prevent abuses had a profound impact,” said Susan Casey, ’95, an attorney and victim outreach specialist in Atlanta, Georgia. Anne Harden Tindall, ’95, of WilmerHale in Washington, D.C., said her experience working at the CPC showed her “the humanity of the people who are being executed,” and led her to concentrate her pro bono work on death-penalty appeals.

“The single experience that affects students the most is going to death row,” Owen said. “It’s an all-day project to visit an inmate in Livingston. A four-hour drive there, six hours at the prison, and a four-hour drive back. And it really transforms the students’ experiences of their cases. They become personally invested in their clients. There are some fairly intense exchanges there, and it gives students an opportunity to forge personal bonds. It changes how they see themselves as lawyers.”

It also exposes them to many aspects of the law. “Death penalty work is an unusual mix of trial-like and appellate-like work,” Steiker said. “They are appeals, but they require extensive investigative work and evaluation of evidence, so students get exposed to lots of different parts of legal practice.”

As the CPC enters its third decade, Steiker and Owen said they see a number of challenges ahead despite progress made. Though life-without-parole sentences have reduced the number of death sentences, they have created problems of their own, including the sheer numbers of people incarcerated in Texas. “Prisoners won’t become eligible for parole for twenty, thirty-five, forty years minimum,” Owen said. “We’re very early in this long experiment and eventually will have to deal with a geriatric prison population and its consequences.”

Additionally, Steiker pointed out that the recent change in the presidential administration and its impact on the composition of the U.S. Supreme Court could lead to a reassessment of the death penalty’s constitutionality. He also said recent economic troubles could curtail the number of executions as cash-strapped states decide whether pursuing an execution is worth the cost.

“We don’t indoctrinate our students to take a stand against the death penalty,” Owen said. “We’ve had conservative, prodeath penalty students come through our clinic, too. But it’s often a consequence of work in our clinic that students come away with a sense of the arbitrariness and capriciousness, and even the practical uselessness, of the death penalty.” Whatever one’s personal stance on the death penalty, the clinic’s work in helping make sure those facing capital punishment receive fair trials and high-quality appeallate representation can only be counted as progress. —Julien N. Devereux