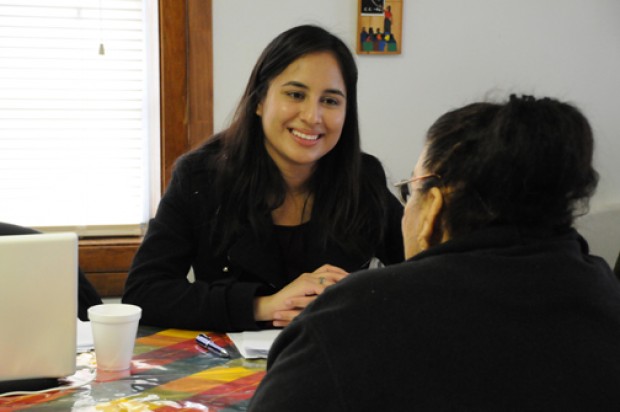 This January 11–15, 2010, forty students from the University of Texas School of Law spent part of their Winter Break in Houston and the Rio Grande Valley carrying out pro bono legal work for underserved communities. The William Wayne Justice Center’s Pro Bono Program and a student group, Pro Bono in January, organized the trip to provide a way for Law School students to carry out meaningful pro bono work in Texas between semesters.

Ten Law School students aided Hurricane Ike victims in Houston from January 11–15. A large number of low-income families whose homes were damaged by the hurricane have been unable to receive housing assistance because they lack clear title to their property. Students partnered with volunteer attorneys in Houston to review title commitments for prospective clients, help families determine the ownership status of their land, prepare affidavits of heirship, assist with contract for deed conversions, and prepare deeds. At the end of the week, pro bono attorneys assumed full representation of unresolved cases.

The Pro Bono in January wills clinic took place at a Project ARISE community center settled in among houses and citrus orchards in a colonia in Alamo, east of McAllen. In addition to Project ARISE staff, students worked with STCRP and TRLA attorneys. Emily Rickers, ’04, who works for TRLA, said the people who live in the Valley’s colonias—rural settlements along the U.S.-Mexico border populated largely by low-income Hispanics—welcomed the wills clinic because it offered them a way to ensure that the property they worked so hard to acquire would be preserved within their families. The UT Law students at the clinic helped clients navigate through the unfamiliar process of drafting a will.

“We do an initial screening with representatives from Texas Rio Grande Legal Aid and the South Texas Civil Rights Project,” Rickers said. “Then clients meet with the law students. We had a training session, informing students about what areas to look out for, and how to think about estate planning. We let them know about things they might want to talk about with the clients so that the clients understand the legal impact of their decisions.”

Mary Crouter, assistant director of the William Wayne Justice Center for Public Interest Law, said the training the students received focused primarily on what questions to ask the clients. “We go through things like what property the clients have, how many children, how many times they’ve been married,” Crouter said.

As clients entered the Project ARISE house, STCRP and TRLA attorneys greeted them at the door to gauge their needs and brief them on the process; UT Law students sat at tables in teams of two or three to work on the wills with clients, while translators assisted when necessary; and then clients were led to a room where the will could be reviewed by an attorney, signed, witnessed, and notarized.

Rickers said the clinic was set up to receive up to sixty clients a day. “Our goal is to reach low-income families, whose home is probably the biggest asset they’ll ever have,” she said. “The home represents the physical embodiment of all the resources that family has been able to accumulate. The community’s been asking for help protecting their assets, and we thought the clinic would be a good way to get something done that, in terms of personnel, would have been difficult for TLRA to do.”

One client, a forty-six-year-old immigrant from San Luis Potosí, Mexico, said having a will had made her more secure. “If something would ever happen to me,” she said, “my children will be secure. I feel a lot more peaceful now.”

Two other clients, Isaias and Ignacia Alfaro of Pharr, said the clinic was important to them and to many other people in the Rio Grande Valley. “Not long ago we were in a car accident,” Ignacia Alfaro said. “We ran off the road and the car fell into a ditch filled with water. My husband pulled me from the car and saved me. It made us think about our preparations for our children after we’re gone. We’re very grateful to the people here for helping us with that. There are a lot of people around here who need this service.”

The wills clinic work also provided valuable experience for the Law School students who participated. “I had just taken Wills and Estates with Professor Stanley Johansen, so I felt prepared,” said Lawson Konvalinka, a second-year student originally from Chattanooga, Tennessee. “At the clinic, we were working with a really good, basic will drafted by TRLA attorneys. So we just had to find out what the clients needed and then tweak it, change it for the family’s situation. It’s hard to standardize their desires. Some people left their estate to their kids equally. Some just to one child. Family situations are unique.”

It also gave students a view of what life is like in a low-income part of Texas. “I did an internship with the Army JAG,” said Kyle Elliott, a second-year law student. “We did wills with soldiers before they deployed. This was somewhat similar. I’m originally from Hondo, west of San Antonio, so it was like meeting people that I grew up around, and helping them meet their needs.”

Students who worked in the wills clinic also spent two and a half days reviewing documents for TRLA in Edinburg. They examined some of the more than 400,000 pages of documents given to TRLA by the U.S. Government in discovery in a suit the organization has filed against a company contracted by Texas to care for juvenile immigrant detainees, who were allegedly sexually and physically abused at a facility in Nixon. The document review was an important introduction to the reality of litigation work. “It was not exhilarating, but it was necessary,” Konvalinka said. “It was a learning experience. And it was very helpful to TRLA.”

Meanwhile, in other parts of the Rio Grande Valley, Law School students represented immigrant detainees, helping them with a variety of legal issues. Second-year student Jordan Pollock represented two undocumented immigrant detainees. One was a woman who, though born in Mexico, had lived in the United States since she was one year old and spoke no Spanish. She was due to be sent back to Mexico, but wished to plead asylum on the basis of her sexual orientation. “It was such an eye-opener,” Pollock said. “There is such a need for legal advocates. Nobody is appointed to represent the people who go through this system. They go through the entire process alone and with no counsel. Even after one year of law school you have skills to help these people. I’m taking Civil Procedure right now and I can’t imagine a class coming to life in a more dramatic way. This trip put the new semester in focus. At law school, you’re building a toolbox. These are real tools that people need. It’s animated my enthusiasm for school. I’m literally on the edge of my seat in Civ Pro!” Pollock and her fellow students also witnessed a criminal sentencing case at a U.S. District Court in Brownsville, and met with Judge Hilda Tagle, ’77.

“This was a wonderful experience for students, who gained valuable practical experience and provided needed assistance to Probar,” said Barbara Hines, a clinical professor and director of the Law School’s Immigration Clinic. “I thoroughly enjoyed working with the students.”

Organizers of the Pro Bono in January trip hope to make it a yearly tradition. In addition to giving current students valuable experience and training, as well as introducing them to the legal profession’s longstanding tradition of public service and pro bono work, Pro Bono in January is part of an important Law School initiative to engage with the State of Texas and its communities most in need of legal assistance.  “It was incredible to watch the level of professionalism and dedication UT Law students brought to the work,” said Tina Fernandez, director of the Law School’s Pro Bono Programs, who was instrumental and organizing the trip and accompanied the students. “Students provided a valuable legal service to the community they served—something they should feel really good about.”—Julien N. Devereux