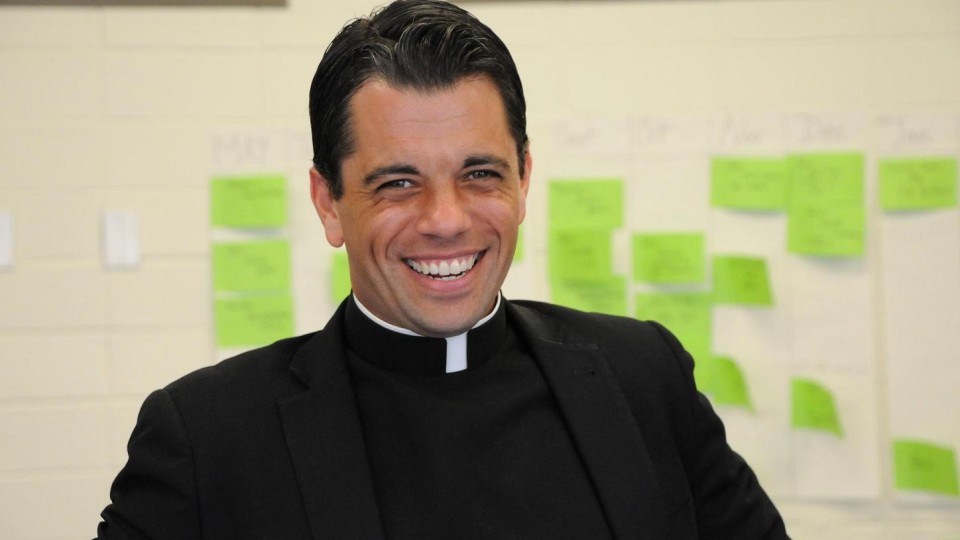 With his trademark black cowboy boots and silver belt buckle complementing his more traditional black suit and clerical collar, the Reverend T. J. Martinez, SJ, is easy to pick out among the students and staff at the Cristo Rey Jesuit College Preparatory School of Houston. Equal parts cheerleader and task master, Martinez roams the campus offering students encouragement while demanding that they strive to reach their full potential.

Martinez,’96, is president of the school, leading its mission to help educate economically disadvantaged children from Houston’s Southside. Cristo Rey Jesuit, which opened its doors to students in the fall of 2009, combines a rigorous academic curriculum with an innovative corporate work-study program.

“Our school serves some of the lowest income kids in Houston, and our promise is that if you go to our school you are going to college,” Martinez said. “The kids go to school longer, which frees up time each week where they can work at participating corporations. The key to this whole project is corporate sponsorship where they hire the kids to work, which helps fund their tuition.”

Since Cristo Rey Jesuit reaches out to students with limited financial resources, this corporate participation makes the school’s educational model economically sustainable. Sponsors provide an entry-level job, which a team of four students fills full-time with each working one or two days a week, depending on their academic schedule. In addition to funding their tuition, the students also gain valuable work experience.

It’s an approach pioneered in Chicago in 1996 by Jesuit priests, who five years later formed the Cristo Rey Network to replicate the success of the original school nationwide. Today, there are twenty-four Cristo Rey affiliates throughout the United States, of which Houston is the latest addition, having been founded in 2009.

“Many of the kids that came here, other schools had given up on,” Martinez said. “Their academic progress has been amazing. Many thought they couldn’t do it, but yes, they can. Some have done so well that they are already taking sophomore classes in their freshman year. Nobody thought that could happen, but it is. It’s a program that shows what they can do when somebody believes in them.”

Cristo Rey Jesuit’s list of corporate sponsors shows that Houston’s business community seems to believe. So far, twenty-three have signed up, including such well-known names as Fulbright & Jaworski LLP; Wells Fargo; Grant Thornton LLP; Vinson & Elkins LLP; Aquinas Companies; and the Methodist Hospital System, among others. In the school’s first year, there were more positions offered than there were students available to fill them. But Martinez ambitiously plans to expand the student body, so more will be needed.

Opening a new school and gaining crucial corporate support in the midst of an economic downturn might have been a daunting challenge for some. But Martinez is not easily discouraged.

“There is never a good time to start a school for economically disadvantaged children, so why not now?” he said. “And what about the seventy-seven children we are now teaching if we hadn’t started right away? I have to answer to God, and I’d rather start now than wait.”

Cristo Rey Jesuit launched a capital campaign in 2009 to help cover the costs of starting and maintaining the school. They hope to raise $10 million by 2013 and, thanks to strong community support, they have already raised $7.5 million.

“Father Martinez has been instrumental in getting the word out to the greater Houston community,” said Dan Walsh, director of the school’s Corporate Work Study Program. “I call it ‘the Martinez magic.’ He keeps spreading the magic across town and beyond. Through the strong marketing and outreach of the mission, he has been able to draw the interest of local and national leadership to this new educational model.”

For Martinez, who has multiple graduate degrees in addition to his law degree, his love of learning has turned into a love for teaching. But leading Cristo Rey Jesuit was not exactly the career path he had anticipated. Instead, he had expected to replace a retiring Jesuit priest who had been teaching at Loyola University and ministering to the faculty there. But the Society of Jesus had other plans for him.

The formation, or training, of a Jesuit priest is a long process, normally taking many years of spiritual and academic education. Martinez was just finishing up a graduate degree in school leadership and administration at Harvard, and preparing to take his final vows, when the Rev. Fred Kammer, SJ, provincial of the Jesuit Fathers in the South, called about a new position in Houston. The Jesuits were looking for someone with youth and energy to start a school for poor children. Martinez objected that he lacked the experience, and that he knew others who were more qualified.

“Father Kammer called me three times after that to talk about the job,” Martinez said. “The first two calls always ended with another try to get me on board to found this school. The third call was different. Rather than offering me the job he simply said, ‘Congratulations, you are the founding president of Cristo Rey Jesuit.’ I thought to myself, ‘So this is how the vow of obedience works.’”

That was but one of many unexpected turns during Martinez’ journey to Cristo Rey Jesuit. After growing up in Brownsville, he attended Boston College, where he earned his bachelor’s degree in political science. Martinez then did volunteer work at an inner-city high school in The Bronx, New York, for a year before enrolling at the Law School. He planned to earn his law degree and then join his father, attorney Tony Martinez, in the family practice.

“One of my heroes was Judge Reynaldo Garza, the first Mexican-American federal judge,” Martinez said. “At the time, he was on the Fifth Circuit Court of Appeals in New Orleans. I had this dream that I would clerk for him then maybe work at the Justice Department, cut my teeth in the legal profession, and then join my dad back in Brownsville.”

Because of his year spent doing volunteer work, Martinez enrolled in the Law School at the same time as his younger brother, Trey, whose interest in the law turned out to be fortuitous for the family business. For during his second year of law school, Martinez began feeling a strong calling to the priesthood. It was a call he felt compelled to answer, so just ten days after taking the bar exam, Martinez enrolled in seminary school at St. Charles College in Grand Couteau, Louisiana.

“What happened is that the plan I had for myself, my brother took it over,” Martinez said. “He gave me the freedom to explore this very different pathway.”

“I had thought about the priesthood when I was young,” Martinez recalled. “At Boston College, the Jesuits reignited the idea of heading out and doing good. That caught my imagination. The Jesuits are known as the soldiers for Christ and the vanguard of the Church. That spoke to my faith and my sense of adventure.”

Though he has taken a different path than most School of Law grads, Martinez has fond memories of his time at the Law School.

“I remember when I walked into Constitutional Law and saw that I had Charles Alan Wright,” Martinez said, referring to the legendary constitutional law scholar who taught at the Law School for decades. “While it was an absolute privilege, at the time I remember thinking, ‘Oh no, this is not the guy I want—this is not going to help my GPA!’ But from the moment he started teaching, he had me. He was brilliant and engaging, and he embodied everything I thought was good about lawyers, law professors, and law school.”

Martinez would eventually get to know Wright, occasionally exchanging letters until Wright passed away. Martinez still treasures a law book he received from Wright, and still treasures the skills he learned in law school as he puts them to use in a very different setting.

“I had an incredible legal education, and I also learned how to think analytically and systematically,” he said. “You can apply those in the legal profession, but you can also apply them in any context. You take a problem apart, look at the pieces and understand them, then put it back together. That’s what law school is all about.” —Tom Gerrow