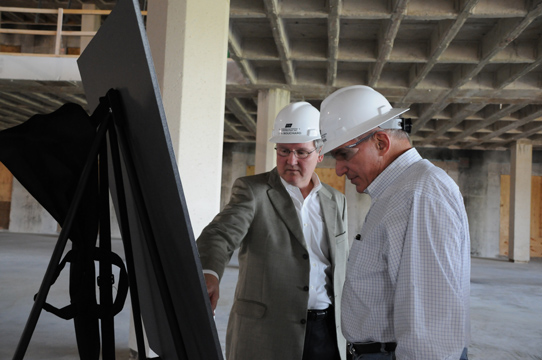 On a warm, sunny April day during the Law School’s 2010 Reunion weekend, Stephen D. Susman, ’65, walked around the fifth floor of the Tarlton Library with Law School Dean Larry Sager and architect Oza Bouchard. Murky light came through plastic tarps where windows once were and through the large rectangular holes that had been recently cut out of the floors above them. The fifth and sixth floors of the library had been gutted; the prints, paintings, sculptures, and antique rugs of the Hyder Collection were in off-site storage, replaced by work carts, metal framing, plastic drums, heavy tools, and construction equipment. But Susman, Sager, and Bouchard, who is overseeing the renovation, were looking past the seeming chaos and animatedly discussing what will take its place in the fall: new faculty offices and seminar rooms, lounge areas, group workspaces for faculty and students—much of which will be illuminated by natural light flooding through the skylights that will take the place of the raw concrete holes. Jones Hall and the Tarlton Law Library, built in 1980, are receiving an update that will bring them into the twenty-first century, thanks in part to Susman, who had just announced to the class of 1965 that he was giving $5 million to his law school.

The spark for this renovation of the Tarlton Law Library and Jones Hall, creating what will be called the Stephen D. Susman Academic Center in honor of his gift, dates back to 2006, when the Law School commissioned a professional study of the school’s physical resources. The study conservatively estimated that the school had 40,000 fewer square feet than needed to comfortably house faculty, classes, clinics, and student activities. Using the same benchmarks, the study also concluded that if the Law School were to achieve its goal of adding fifteen members to the faculty (and expanding programs and courses accordingly) the school would then face a shortage of more than 85,000 square feet.

The renovation will remove faculty offices currently on the third floor of Jones Hall and create three vertically integrated floors, connected by elevators and a central stairwell. This will allow access to the library from the third floor of Townes Hall, which is currently impossible. Meanwhile, the fifth and sixth floors of the library will be transformed into the Susman Academic Center. When the renovation is complete, the Susman Academic Center will include a total of fifty-four windowed faculty offices; thirty-eight additional offices illuminated with natural light via skylights; two large, high-tech equipped meeting rooms, each of which can be flexibly subdivided into two or three separate areas; an expansive commons area with a two-story atrium; two faculty research areas; six additional conference rooms; and four seminar classrooms.
The Susman Academic Center will not only expand the Law School’s available office and public space and create a more attractive, light-filled space for teachers and students to work in—providing an impressive space that will help attract promising students and faculty to the Law School—it will also allow more places for present students and faculty to meet and collaborate in. According to Bouchard, associate principal at Morris Architects, the firm overseeing the renovation, “the perimeter of the fifth and sixth floors will be organized to maximize the number of faculty offices with access to windows. The main public area of levels five and six will be a two-story atrium, bathed in natural light, which will become the social device that connects the collective of the Law School.”

Bouchard said that in addition to increasing available space and facilitating interaction, the new Center’s light-filled spaces will offer a brilliant new setting for the Law School’s collections while also becoming more contemporary and comfortable. “We’ll use a natural palette against clean white walls, with color accenting strategic moments to enhance this inviting environment,” he said. “Warm woods will lend depth and interest to the public areas, and will also be used to exhibit the unique patent model collection owned by the Law School. Opportunities to display the Law School’s extensive collection of art, rare books, and sculpture, combined with domains for informal interaction between students and faculty, will create moments throughout the facility, and those will become favorite spaces for the building’s users, personalizing the Law School experience and creating a sense of belonging.”

The new center will, in short, create conditions that greatly ease the Law School’s goal of allowing its faculty and students to excel academically. And it is thus fitting that the new center will be named after Susman, whose career has been dedicated to putting that academic excellence into practice and is himself one of the Law School’s most academically gifted alumni. He was thus named Grand Chancellor for his year, Order of the Coif, and was editor of the Texas Law Review. He makes a point of hiring lawyers who have demonstrated academic excellence, many of them from UT Law. “We have, by far, the lawyers with the best academic credentials of any firm in the country,” Susman said. “And we remain the most profitable firm in Texas and among the most profitable in the nation. I attribute it all to the Law School.”

The goals of the renovation appeal to Susman, who has taught at the Law School and even considered an academic career before founding his firm. “My firm has just gone through a search for additional space in New York and the other lawyers have convinced me of the benefit of having everyone on the same floor and in the same place,” Susman said. “I think it’s terrific that all those faculty members can be located in the Center. I was very impressed with how much light the architects have introduced.”

Susman’s family connections to the Law School run deep, as does his family’s emphasis on education. “My mother graduated in 1934,” Susman said. “Her only female classmates were Madge Keeton and Helen Hargraves (our librarian for many years). Her law degree allowed her to provide my brother and I with every opportunity, including a Yale BA and a Texas law degree. When we finished Yale and said we wanted to go to Harvard, she balked and said we had spent enough time in the East and needed to come home for our legal education. She was very right.”

Susman Godfrey hires academically gifted lawyers because the firm knows that its ability to anticipate trends and identify the salient issues in a case depend on having lawyers with both legal knowledge and intellectual firepower, and who can work together as a team. The Susman Academic Center will create the conditions for such future lawyers to gain that knowledge and train and exercise their intellects. It’s not too much to imagine that some gifted young UT Law students will move on from the Susman Academic Center to Susman Godfrey itself.

“My wife and I were revising our wills and it occurred to me that I had the ability to make this gift before I die,” Susman said. “I wanted to give it to a cause that is dear and near to me. The Law School has educated three generations of Susmans and its payback time. I hope the gift will help the Law School remain one of the top ten in the nation and encourage its graduates to love the law, either teaching or practicing, as much as I have.”

Though Susman says that he has given his gift to the Law School as a way of giving back to an institution that has shaped him, he most assuredly does not see it as a way of announcing his retirement. In April, he completed the BP MS 150, a one-hundred-and-fifty-mile bicycle ride from Houston to Austin that raises money for multiple sclerosis research. “I did it to prove to my partners that they don’t have to worry about a succession plan,” Susman said of the ride. “I think I’ve still got a few miles left.”

Certainly Susman’s legacy is assured at the Law School. His generous gift, through the Susman Academic Center and other uses, will ensure that the Law School is able to excel academically for years to come. Susman’s gift is unrestricted, meaning that the money can go to fund whatever is needed most. But the Susman Academic Center, currently scheduled to open in the fall of 2010, will become an engine for the academic achievement so valued by Susman. According to Dean Sager, “Our new academic center will be the heart of the UT Law enterprise,” and a more fitting tribute to Susman’s legacy and his love for the Law School could not be found.—Julien N. Devereux

The editors wish to thank Morris Architects and Satterfield & Pontikes Construction for guided access to the Susman Academic Center construction site and for their assistance in the development of this article.