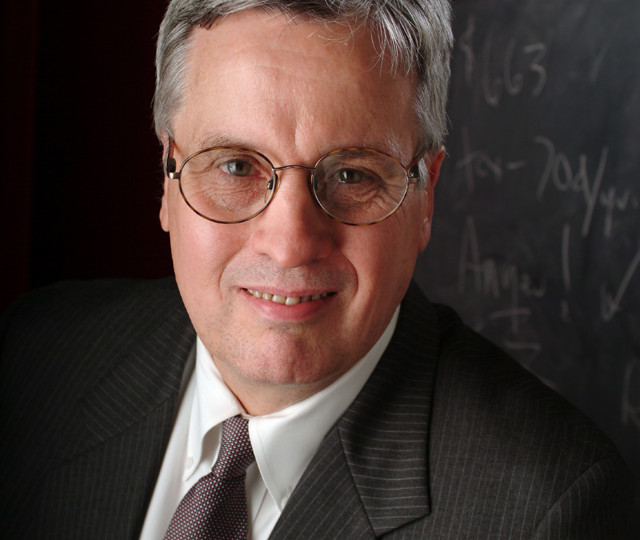 Calvin Johnson has fifty ways to raise $1 trillion in taxes without raising rates, and he wants to convince Congress to adopt them. Now, he may get his chance. Johnson, the Andrews & Kurth Centennial Professor at the Law School, was recently awarded a fellowship at the Tax Policy Center, a nonpartisan joint venture of the Urban Institute and the Brookings Institution based in Washington, D.C. The Tax Policy Center provides analysis for both policymakers and the public, and has a team of world-class budget and tax economists.

“It’s a chance to talk tax intensely with very good people,” Johnson said of his colleagues. “They are at the top of their profession, so I can’t tell you how much fun I think that opportunity will be.”

Johnson will use his fellowship, which began May 1 and runs through December 31, 2011, to continue his work on the Shelf Project. This is a collaborative effort with other tax professionals to develop proposals that Congress can simply “pull off the shelf” when it needs to increase revenues.

“I’ll be spending a lot of time talking to staff on both the Republican and Democratic sides,” Johnson said. “They will help me reshape the Shelf Project to be of maximum service to Congress when it’s ready to raise taxes. It’s not ready to raise taxes yet, but the time is coming—there is an impending budget catastrophe. Now is the time that the staffers should be doing the legwork, [preparing] the contingencies.”

If a budget crisis does occur, Johnson is concerned that eleventh-hour negotiations to avert a catastrophe could lead to passage of ill-conceived tax policies that do more harm than good.

“Congress, if desperate, will adopt junk,” Johnson said. “We clearly are going to need revenue, but you can’t do tax reform at three o’clock in the morning unless you have this stuff on the shelf already. The only things you can do then are rate increases, which I think are the wrong way to go. You have to build a system that has been thought through, and that is very time consuming.”

Johnson believes the administration should allocate $4 million to hire twenty tax professionals to spend a year creating tax systems that protect the tax base and raise needed revenues.

Shelf Project proposals are a good place to start, Johnson argues, because they can make the tax system fairer, more efficient and less avoidable. Unfortunately, he said, these reforms will likely require a budget crisis to spur Congress to action.

“The Shelf Project is [designed] to raise revenue by making the tax base more efficient by more comprehensively describing taxpayers’ standard of living,” Johnson said. “Everybody agrees that the best tax system is low and wide, and unavoidable. That creates the fewest distortions.”

Since 2007, the Shelf Project has generated sixty-three proposals, many of which focus on protecting the tax base by reducing or eliminating exemptions, loopholes and shelters—collectively known as tax expenditures. Much of Johnson’s scholarship over the years has examined how these tax expenditures introduce inefficiencies.

“Tax expenditures have to be put in the same category as spending money directly, because the impact is the same,” Johnson said. “It increases the deficit, warps decisions, and is highly inefficient. It’s crystal clear that the greatest government waste is on the tax expenditure side.”

Johnson recently presented the Senate Committee on Finance with information on the Shelf Project, including those fifty ways to raise $1 trillion in revenue. For example, a carbon tax could generate $100 billion while eliminating the home mortgage interest deduction could net $94 billion—both politically tricky propositions—but he offered many other tax law changes that, collectively, could bring in hundreds of billions of dollars.

“We should be able to raise at least a trillion dollars a year more revenue within the current income tax system, without a rate hike or a Value Added Tax, largely by making our tax accounting better reflect economic income,” Johnson noted in his report. “Our current system has too many tax pits, which absorb revenue and distort investment decisions. We allow deductions for fictitious losses. ‘Taxable income’ under our tax accounting does not reach and describe high-class consumption as well as it needs to. Moving toward a more comprehensive income tax base to make it less easily avoided would improve both the fairness and efficiency of the income tax.”

The message is simple: Increasing the tax base, without raising rates, can save the federal budget. “That is the grand middle in which these compromise solutions are going to be had,” Johnson said.

Johnson is deeply familiar with tax law. Prior to joining the Law School’s faculty in 1981, he was a tax lawyer with Paul, Weiss, Rifkind, Wharton and Garrison in New York. He also worked at the Treasury Department and the Internal Revenue Service, and served as chair of the American Bar Association Tax Section Committee on Tax Structure and Simplification and chair of the American Association of Law School, Tax Section.

“Tax policy ought to do the least possible harm,” Johnson said. “But it’s all bad news, there’s nothing good about taking [people’s] money.”

“My favorite projects have a strong case and a clean solution to important problems,” Johnson said. “They are not necessarily the largest or most important projects, and other lists of ten would dominate on other days.”  The proposals are listed here, most recent first.  All links below are to PDFs.