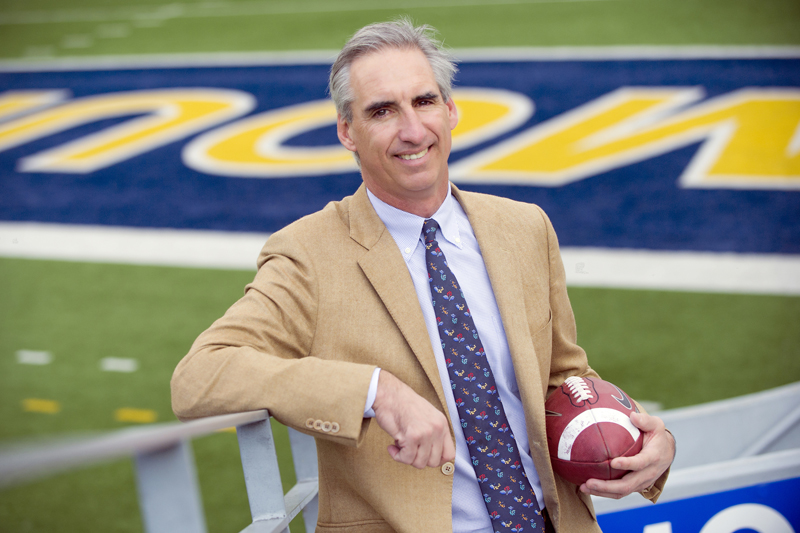 On New Year’s Eve in 1981, the University of Florida was a sure bet to beat West Virginia University in the Peach Bowl. But in front of more than 37,000 fans at Atlanta’s Fulton County Stadium, West Virginia quarterback Oliver Luck led his Mountaineers to a 26-6 upset of the Gators.

“I think a lot of guys realized this was the last game of their careers, and they sort of went above and beyond their call of duty,” Luck told an interviewer in 2005. “I think you need to have those types of performances every now and then to really have a big upset.”

Luck, ’87, was among the guys on the West Virginia team who were playing in the last game of their collegiate football careers. It wasn’t the last time he’d don a football uniform, however. Luck went on to play five seasons with the National Football League’s Houston Oilers, primarily as a backup to future Hall of Famer Warren Moon.

Now, Luck’s football career has come almost full circle. In July 2010, Luck returned to the West Virginia University campus in Morgantown as his alma mater’s director of athletics, overseeing all of the school’s sports programs, including the very football program that helped launch his NFL career. His ascension to athletics director at West Virginia follows high-profile executive roles with the NFL, the Harris County-Houston Sports Authority, and Major League Soccer’s Houston Dynamo.

“You have one life to live. I think it’s important to try to do a number of different things in one’s professional life. I think people get stale after doing the same thing for fifteen or twenty years,” Luck said.

“Stale” is hardly a word that anyone would use to describe Luck. Take, for instance, his decision to pursue a JD. While still on the roster of the Oilers, Luck juggled a part-time course load at South Texas College of Law during the season and a full-time course load at UT during the off-season on his way to a law degree. “I was a registrar’s nightmare,” Luck said.

Why a law degree? After earning a bachelor’s degree in history from West Virginia in 1982, the Ohio native wanted to obtain a second degree. He pondered a master’s degree but settled on a JD, even though no one in his immediate family was a lawyer.

Indeed, Luck practiced law for just a couple of years with the commercial transactions group at Fulbright & Jaworski LLP in Washington, D.C. (His wife, the former Kathy Wilson, ’86, was a lawyer at Andrews Kurth LLP, also in Washington, D.C.) “I really didn’t have a burning desire to practice law,” Luck said. Luck had joined Fulbright & Jaworski after completing a one-year legal fellowship in Germany.

At one point, however, Luck didn’t want to practice law—he wanted to make laws. After leaving Fulbright & Jaworski, Luck embarked on a bid for a congressional seat in West Virginia. He was the Republican challenger in 1990 to then-U.S. Representative Harley Staggers Jr., a Democrat who was first elected to Congress the year that Luck graduated from West Virginia. Luck garnered 44.5 percent of the vote, with Staggers securing 55.5 percent and a return to Capitol Hill.

Luck compared running for Congress to running a business. He had to hire workers, raise money, and stick to a budget—not to mention market himself through the proverbial pressing of the flesh and kissing of the babies. How did he react to losing? Just as if it were a football game that had fallen from his grasp, Luck said he didn’t spend much time stewing over it.

Employing a sports metaphor to explain coping with the congressional defeat, his first shot at political office, Luck said, “There’s always a game next week. You never get too high after a victory—you enjoy it—and you never get too low after a defeat.”

His political aspirations dashed, Luck soon took his career in a new direction: He moved with his family to Germany after he was hired as vice president of business development for the NFL, a key position in the then-nascent push to globalize American football. He later was general manager of the Frankfurt Galaxy in the newly created NFL-backed World League of American Football, and general manager of NFL Europe’s Rhein Fire, a German team. In 1996, he was tapped as president and CEO of NFL Europe. Under Luck’s leadership, NFL Europe doubled ticket revenue and tripled TV revenue. All in all, Luck spent more than ten years as an NFL executive.

Based on his experience in Europe, Luck recommends that every American spend some time overseas—and not just on vacation. He thinks Americans should work abroad as well.

“Business is different than pleasure,” Luck said. “When you’re doing business, you really get to know how a culture operates, how people think, how they like to do business. Is a handshake deal enough? Are they straightforward? Are they going to come back and renegotiate?” He added: “I wouldn’t have traded those ten years for anything.”

Luck did trade Europe for the United States, however. He and his family came back to the U.S. in 2000, with Luck launching his own sports consulting firm. The Luck Group LLC operated for a couple of years. Luck made another major professional move in 2001 with his switch to CEO of the Harris County-Houston Sports Authority. During his tenure there, Luck oversaw development and management of a $1 billion sports and entertainment complex, including Minute Maid Park, home of the Houston Astros; Reliant Stadium, home of the Houston Texans; and the Toyota Center, home of the Houston Rockets.

In 2005, Luck switched professional gears once again: He was named president and general manager of Houston’s new professional soccer team, the Houston Dynamo. Luck was the Dynamo’s first president and GM. During his Dynamo stint, the franchise racked up consecutive league championships in 2006 and 2007, becoming only the second team in league history to do so. Also, Luck played a key role in securing a soccer-specific stadium and a new practice facility for the Dynamo.

Ready for yet another challenge in the sports business, Luck accepted an irresistible invitation last year to lead the athletics department at West Virginia. He succeeded the retiring Ed Pastilong, who had held the post for more than twenty years. Luck gave up his seat on the university’s Board of Governors to carry the sports banner for his alma mater.

“Oliver Luck is someone who has succeeded at the highest levels at everything he has done—from his college and professional football-playing days to his academic pursuits and his professional business career,” West Virginia University President James Clements said in 2010. “He is the clear choice to carry forward what has truly been a golden era in athletics.”

Luck and his family relocated from Houston to West Virginia to enable him to carry forward that “golden era in athletics.” Oliver and Kathy Luck have four children: Andrew, Mary Ellen, Emily, and Addison. You may have heard of Andrew. He’s the starting quarterback at Stanford University and a Heisman Trophy runner-up, and is widely expected to be the top pick in the next NFL Draft. Either Oliver or Kathy (or both) plans to attend all of Andrew’s games during the 2011 football season. The Lucks also watch as many of daughter Mary Ellen’s volleyball games as possible; she’s on the volleyball team at Stanford.

By the way, Oliver Luck said he’s given “zero advice” to Andrew about his NFL future. The former Houston Oilers quarterback said he’ll share his thoughts with his quarterback son at “the appropriate time.”
In the meantime, Luck is concentrating on West Virginia sports, whose football and men’s basketball teams often are ranked highly in college sports polls. The new job—in which he’s having a “blast”—represents Luck’s first turn as a college sports executive. Luck said one of his goals at West Virginia’s flagship university is to instill private-sector innovation into public-sector athletics.

“There’s really nobody else in the world that does college sports like we do college sports in the U.S. The Europeans think we’re nuts in terms of our great universities across the country supporting athletic programs. It’s a real mystery to them,” Luck said.

Another mystery, of sorts: How long will Luck remain at West Virginia, particularly given his globetrotting career? At age 51, Luck has plenty of good years left in his professional life. While his current game plan is set, his future game plan remains to be written.

“Who knows what comes along in ten years?” Luck said. “Right now, my focus is one hundred percent on my alma mater.”—John Egan