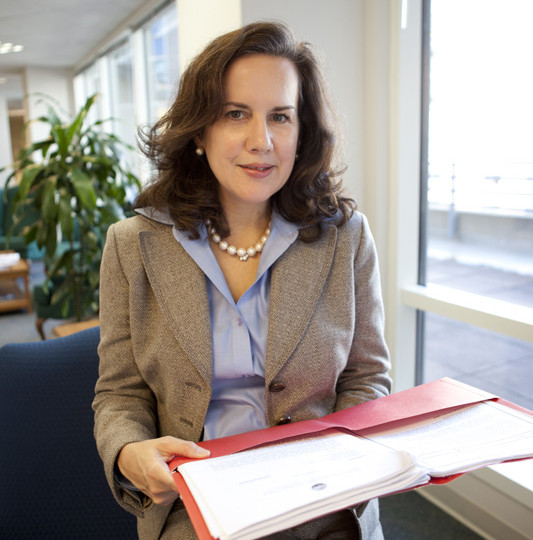 Allison Lerner, ’89, never had any intention of pursuing work with the federal government. During her time as both an undergraduate at the University of Texas at Austin and a student at the Law School, her main conviction was that she wanted to do something meaningful—and while that path initially led her to work for a private law firm in her hometown in San Antonio, that’s not where she stayed.

“It wasn’t an idea I had going into law school. It wasn’t even an idea I had leaving law school. It’s just something I kind of fell into,” Lerner, the current inspector general for the National Science Foundation and recent White House appointee to the Government Accountability and Transparency Board, laughed. “I wanted more than I got out of the brief time that I had in the private sector. The work was interesting, but not particularly fulfilling. I wanted something that made me feel like I made a difference.”

Lerner’s push for meaning saw her leave her position as an associate at a San Antonio firm, where she worked on litigation, after less than a year. “My husband—then my fiance—ended up taking a job in Washington, D.C., so I ended up getting married and leaving town,” she said. “I knew I wanted something that was more fulfilling than the brief stint that I had in the private sector, so I was looking to government.” She sent out resumes (“This was back in 1991, so it was pre-Internet,” she explained) and one that she had submitted to the Department of

“Liked” may be an understatement in Lerner’s case, in fact—she’s been in the community of inspector generals for two decades, and she’s still passionate about her work. She left her position as counsel to the inspector general at the Department of Commerce to take on the role of IG at the National Science Foundation in 2009. It’s clear that this is work that she finds as fulfilling as she’d hoped.

An inspector general is put into agencies to prevent fraud, waste, and abuse, and to promote economy and efficiency. They serve as watchdogs for the taxpayer to ensure that taxpayer funds are used as they should be, and that criminal acts are identified and prosecuted. “That’s something I could wrap my heart around,” Lerner said. “The training I had as a lawyer is a great skill to take into what we do. A lot of what inspectors general do is through two means: audits, where you follow the money, and investigations, where you’re looking for violations of criminal and civil law. It’s very evidence-focused, so training as a lawyer is useful in what we do. Looking at case law and that sort of thing is very useful. On limited evidence, you have to make hard calls about people’s actions and motivations. Legal training was great for what I did. Coming into the community as a lawyer was a great way to get into the organization, because I got to work with both auditors and investigators. The skills and experience I gained as a lawyer are what helped me rise through the ranks, to the point where now, I’m the boss.”

Lerner is more than just a boss at the National Science Foundation—not that that’s anything to scoff at. She also received an email earlier this year from the White House, tapping her to join the Government Accountability and Transparency Board at its launch. Lerner was one of eleven designees asked to serve in the role, and receiving that letter is a high point in her career.

“The President reached out to six inspectors general and five people at the deputy secretary level who had distinguished themselves in the relevant areas and asked us to serve on this board. I’m thrilled that they did, because I think the board has a tremendous opportunity to make a difference in the way government works right now.” Lerner can recall the exact moment she saw that message in her inbox, and it’s a moment she looks back on with pride. “It was exciting. I was waiting to pick my daughter up from soccer practice, and she came in the car and I was screaming. I showed her the email saying that the president wanted me to do this, and it impressed my eighteen year-old daughter. It doesn’t get much better than that.”

Obviously a personal request from the president of the United States to serve on a new board that he’s putting together is something that just about anyone would wear as a feather in her cap. But for Lerner, who never expected to end up working for the government, it’s also further proof that the skills she picked up at the Law School have extremely broad applications. While she once worried that by pursuing work as an inspector general she’d be limiting her options—the skills one acquires in that field are “fairly niche,” she said—she’s found that they dovetail very nicely with the skills she acquired at the Law School.

“What law school does best is teach you how to think,” she said. “It teaches you the value and the importance of evidence, and it teaches you how to make distinctions among people and actions and events. All of those things are critical to what I do here.”

In addition to reaching a level in her career where she’s responsible for overseeing an entire government agency, and succeeding in her field to the point where her work has caught the president’s notice, there have been opportunities that have come with Lerner’s career path that she could have never predicted. For instance, her work at the National Science Foundation has taken her as far from her Texas roots as she could possibly go: namely, to the South Pole.

“NSF funds the research facilities that the United States has down in Antarctica, and one of the things I did early in my tenure here was get down there. To oversee something, you have to understand it, and everyone in my agency was telling me that you can’t understand what we do in Antarctica on paper—I had to go down to check it out. And they were right,” she said. While she described the South Pole as phenomenal, Lerner added that there’s also plenty of work to keep her team busy. “There are lots of opportunities for oversight,” she said. “When you’re down at the bottom of the earth, it’s easy to assume that there’s no one checking to see if you’re doing things right.”

It’s clear that the opportunities Lerner has encountered are due to a variety of factors: her passion for the work, her training as a lawyer, and the fact that she’s obviously very good at it. But it’s equally obvious that those opportunities presented themselves to her because she had a broad idea of what she could accomplish as a Law School graduate. And that’s something she’d recommend to anyone looking for a career like hers.

“I followed my heart because I wanted something more,” she said. “When I came to this work, it felt right. You have to keep an open mind, and keep yourself open to things you might never have thought of.”—Dan Solomon