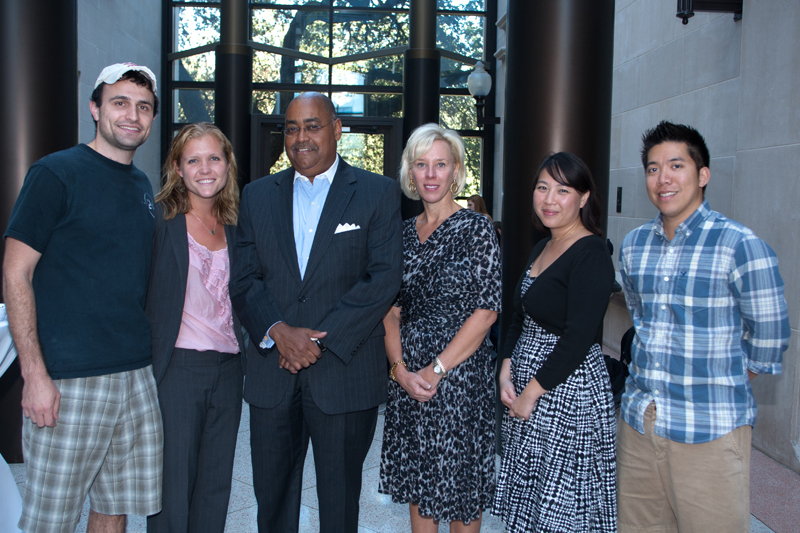 On Wednesday, February 22, 2012, students from the Law School’s Hargrave Society met with Senator Rodney Ellis, ’79, in the Betty King Committee Room at the State Capitol. Ellis serves as the Community Fellow for the Hargrave Society, which is one of the eight societies in the Law School’s Society Program. The Society Program is designed to build a sense of community at the Law School and to provide students with access to the faculty. Through the Community Fellows initiative, each society is associated with an attorney who is highly distinguished and respected in the community. The Community Fellows meet with the students in a small group setting and, in addition to Ellis, include Judge Nancy Atlas; Jack Balagia, ’76; Texas Supreme Court Chief Justice Wallace Jefferson, ’88; UT President Bill Powers; Judge Edward C. Prado, ’72; Harry Reasoner, ’62; and Judge Lee H. Rosenthal.

At the Capitol, the students engaged in an interesting and lively conversation with Ellis. The senator, who was elected to the Texas Senate in 1990, shared his advice for building a successful career as well as some of the lessons he has learned during his career in public service and as a legislator. Ellis also discussed some of the issues on which he is currently focusing.  “As a legislator, I always enjoy the opportunity to bring students to the Capitol,” he said. “It was a pleasure talking with students from UT Law because they asked such good questions. We discussed a variety of issues, including criminal justice, redistricting, and the nexus of politics and policy making. I am happy to serve as the Community Fellow for the Hargrave Society and to support the law school community in this way.”  Interim Dean and A.W. Walker Centennial Chair in Law Stefanie Lindquist serves as the Hargrave Society’s faculty advisor. “The Hargrave Society is thrilled to have Senator Ellis as our Community Fellow,” Lindquist said. “Not only is he a distinguished alumnus with a remarkable record of public service in the Texas Legislature, but he is an inspiring speaker and role model for students.”