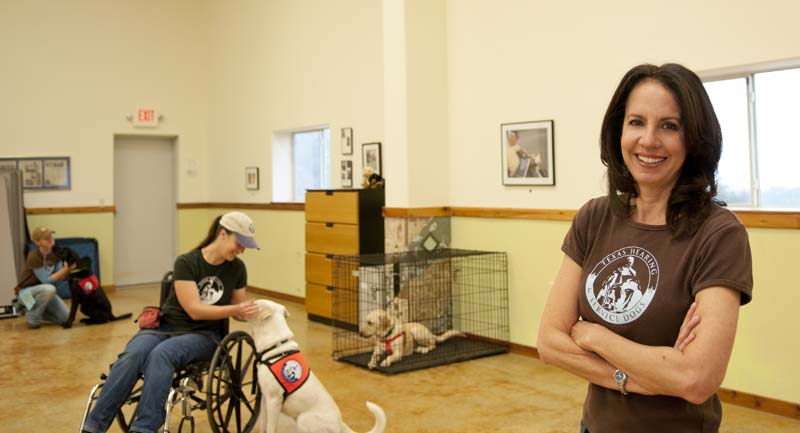 “I’m actually more a cat person,” Sheri Soltes will explain when you ask her how she ended up leaving her successful practice as a trial lawyer to found and run the nonprofit Texas Hearing & Service Dogs in Dripping Springs, just outside of Austin, in 1988. This is just one of the contradictions that Soltes wears like a badge of honor—and one of the contradictions that’s clearly helped her carve out a role for herself at a high level in every field she finds herself in. For the past two decades, that role has been training rescued dogs, recruited from shelters throughout Texas, and pairing them with people possessing hearing and other physical disabilities—people who need a little bit of what she describes as “technology you can hug.”

Soltes works with animal shelters all over Texas to find dogs that are good candidates for the program—chosen based on their temperament, age, and health—and works with a team of trainers to prepare them for a partnership with a disabled person who will rely on the animal to do everything from taking the ticket at a parking garage to alerting them when a fire alarm goes off.

If that’s not a path that you’d expect a graduate from a top law school to find herself on, Soltes explains her journey in a way that makes perfect sense. There are a few key elements to taking a law school training and legal background and adapting it to fit a career working with service animals.

“I was a trial lawyer for eight years at a firm in Houston after going to the Law School,” she explained. “And in this firm, I tried thirteen cases by myself the first year—they were all older cases and they’d say, ‘You know, the judge is going to throw this case out, so why don’t you go ahead and try the case? You meet the client at eight, the trial’s at nine. Here’s your plane ticket!’”

Soltes quickly discovered that she thrived under the sort of high-stakes, big-pressure conditions she encountered practicing law this way. “These were all pretty much cases that should not have been won, and I won about fifty percent of them,” she said.

That’s not bad for someone who hadn’t even set out to be a trial lawyer. “When I was interviewing for the position, they asked, ‘How long have you wanted to be a trial lawyer?’ And I said, ‘Ever since I walked in the door and that’s what you guys did,’” she laughed. Still, the fact that it wasn’t her passion caught up with her. “I was more of a ‘save the world’ kind of person,” she says now. “When I would get to parties and people would talk about all the things that they were buying with their money, I found that super tedious.”

Soltes started Texas Hearing & Service Dogs as a side project; after leaving trial law, she worked as a briefing attorney for Judge Margaret Mirabal, who then served on the First Court of Appeals in Harris County. “I started a lot of this when I was working for her,” Soltes said. “I could work on a brief, then take a couple of minutes to do some small tasks for Texas Hearing & Service Dogs.” About three years into the project, Soltes had found herself working for another law firm, and when that firm’s partners split she decided the time was right to make the dogs her full-time focus. “Instead of going with either side, I made the commitment to do Texas Hearing & Service Dogs,” she explained. “I really didn’t take a salary for a few years, but I had a lunch with [Texas Monthly founder and former editor] Mike Levy, ’72, and he said, ‘You need to pay yourself a salary.’”

“Learning how to be a business person was something I did as people would mentor me,” Soltes added.

Key element number three: Find the smartest and most capable people you can, and learn from them.

Soltes hadn’t really planned on going to the Law School. She graduated from the University of Texas at Austin with a Plan II Honors liberal arts degree, and says she lacked direction—law school appealed to her partly because she could apply with any kind of undergraduate degree. “I didn’t have a better idea,” she laughed. “Instead of hiking through Europe for three years, I thought, ‘I’ll just wander through law school, and at the end, I’ll have a law degree.’”

By her own admission, Soltes didn’t quite “get” law school at first, but she figured out an important skill that she possessed while at the Law School that’s served her well ever since. “I jumped into the study group with the smartest kids, and they helped me understand things,” she said.

That’s something that she quickly developed into a part of her practice as a trial lawyer, and which evolved into part of the philosophy she used to build the team for Texas Hearing & Service Dogs. “As a trial lawyer, you have expert witnesses who are specialists on whatever their body of knowledge is,” she said. “I thought, ‘I don’t have to know how to do everything—every time I need to do a task, I can find someone who  knows how to do it, and get them to help me.”

This made developing Texas Hearing & Service Dogs easier than it might have been otherwise. “Someone’s boyfriend was an accountant, so when we filed our application to be tax exempt, he did that; a guy I went to law school with was a corporate lawyer, so he got us incorporated as a nonprofit; I sort of set up the organization where any time I needed a task, I’d find someone who was an expert and let them do that part, while I was still setting the policy.”

Key element number four: Remember that in any case, you’re there to help the people—and dogs—who need it.

Training the animals that Texas Hearing & Service Dogs works with is a long, expensive process. Soltes estimates that it takes about $20,000 to train the animals, and as a 501(c)(3) nonprofit organization, Texas Hearing & Service Dogs provides these animals free of charge to the people they serve. And hearing Soltes talk about the impact that it has—both on the dogs who’ve come from a shelter background and on the people who need their help—makes it clear why she considers the time, money, energy, and effort she’s expended on her journey from the Law School to running the organization worthwhile.

She can relate stories of times that the dogs have saved their partners’ lives, and of the emotional benefits that both the people and the animals have gained from the relationship. But her favorite story is of Chris McAllister, a teacher in Arlington, and his Australian shepherd, Blue.

“He was working on a master’s degree in education, and he was in the library. He dropped a book, and before he could even ask Blue to get it, he said, ‘Blue was on it—he brought it to my lap.’ He said that’s the biggest thing for him: ‘Just getting my dignity back.’”

Soltes is every bit as proud of this story as she is of the wins she had as a trial lawyer, or of graduating from the Law School with honors. “It’s not every day that they’re going to save your life,” she said, “But it’s every day that they make life worth living.”—Dan Solomon