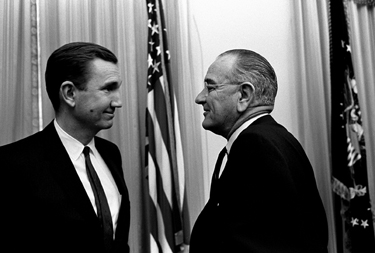 Ramsey Clark, who served as attorney general under President Lyndon B. Johnson, will present a talk entitled “From Civil Rights to Human Rights” on Monday, November 12, 2012, from noon to 1:00 p.m. in the Law School’s Eidman Courtroom. Lunch will be served in the Jamail Pavilion at 1:00 p.m. The event is free and open to the public.

Following his term as Attorney General, Clark worked as a law professor and was active in the anti-Vietnam War movement. He undertook two unsuccessful Senate campaigns in New York. Clark became an antiwar and civil rights activist, founding the International Action Center, and speaking out against the United States’ 1991 and 2003 military invasions of Iraq. He has served as legal counsel to many controversial figures, including Slobodan Milosevic and Saddam Hussein. In 2008 he received the prestigious United Nations Human Rights Prize.

Clark was born in Dallas. At the age of seventeen he joined the Marine Corps, and served in Europe in the final months of World War II. He received a bachelor’s degree from the University of Texas and a law degree from the University of Chicago. After completing his education, Clark joined his father’s Texas law firm, Clark, Reed and Clark, where he remained until he was appointed AAG. Clark’s father was former U.S. Attorney General and Supreme Court Justice Tom C. Clark, ’22. Justice Clark’s papers are housed at the Law School’s Tarlton Law Library.

The talk is co-presented by the two centers at the Law School—the Bernard and Audre Rapoport Center for Human Rights and Justice and the William Wayne Justice Center for Public Interest Law. Student organization cosponsors include the Public Interest Law Association, the Texas Journal for Civil Liberties and Civil Rights, and the Thurgood Marshall Legal Society.

The Bernard and Audre Rapoport Center for Human Rights and Justice

Guide to the Tom C. Clark Papers at the Tarlton Law Library