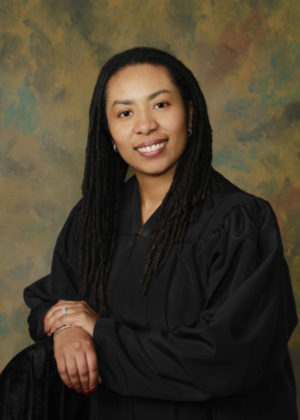 Texas Law alumna Judge Aurora Martinez Jones ’07 has been elected to Board of Directors of The National Council of Juvenile and Family Court Judges (NCJFCJ). She is currently an appointed associate judge in Travis County, based in Austin, having been sworn in on January 2, 2015.

Originally from La Porte, Texas, a suburb of Houston, Judge Martinez Jones received a Bachelor of Arts degree in Government and a minor in Spanish from UT Austin and then attended Texas Law. Upon receiving her law license she started The Martinez Jones Law Firm. As an attorney, Martinez Jones practiced primarily in child welfare law, personal injury, probate, real estate, family law, and civil litigation, making a powerful impression on colleagues and peers working on those issues.

“Her extraordinary work for children and families in Austin has been a forward-thinking example and a new wave of judicial leadership in the community,” said Judge John J. Romero, Jr., the NCJFCJ president.

Judge Martinez Jones is certified by the National Association of Counsel for Children, and has extensive experience working with parents suffering from drug and alcohol addiction. Her current judicial position is dedicated to the child welfare dockets in Travis County including the specialty Family Drug Treatment Court.

She is currently the chair-elect for the Texas Children’s Justice Act Task Force, the past president of the Austin Black Lawyers Association and former chair of the Austin Court Appointed Family Advocates (CAFA). Judge Martinez Jones is active in both the local Austin Bar Association and Texas State Bar through her service on various committees. She is also a Texas Bar Foundation Fellow and a member of the Robert W. Calvert American Inn of Court.

“We are proud of preparing our graduates for great careers at the highest levels of the law,” noted Dean Ward Farnsworth. “Judge Martinez Jones is a shining example of someone achieving extraordinary things in public service. She is a wonderful judge, a dear person, and an important example for our students. We are thrilled for her.”

Prof. Lori Duke ’95, who teaches in Texas Law’s Children’s Rights Clinic, seconded Dean Farnsworth’s praise. “Over the years I’ve worked with Judge Aurora Martinez Jones in multiple capacities: as opposing counsel, as co-counsel, and now judge. She has dedicated her career to understanding and improving a very complicated system for the benefit of children and families who appear before her. This is a well-deserved honor.”