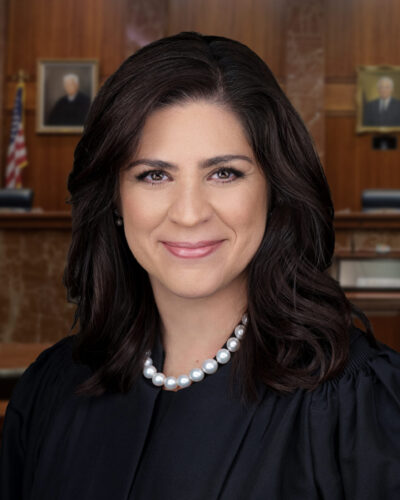 Justice Rebeca Aizpuru Huddle ’99 was sworn-in on December 10 to serve as judge for Place 5 of the Texas Supreme Court. She was appointed to the court by Gov. Greg Abbott in October 2020 to replace retired Justice Paul Green. Her current term ends on Dec. 31, 2022.

Before entering public service, Huddle practiced law as a litigation attorney at Baker Botts, L.L.P., where she she first became a parter in 2008. She returned to the firm in 2017 to resume her practice in commercial litigation and appeals. She served as the Partner-in-Charge of the firm’s Houston office beginning in 2018.

Huddle was born and raised in El Paso, Texas. She earned her undergraduate degree in political science at Stanford University and taught Spanish for a year before returning to Texas to attend law school.  She earned her law degree at The University of Texas School of Law in 1999, where she was the recipient of three endowed presidential scholarships and graduated with honors. In 2017, Justice Huddle served as a faculty member for the Center for Women in Law‘s Women in Law Institute, an all-day, intensive workshop for law students, judicial clerks, and LL.M.’s that was hosted at Texas Law.